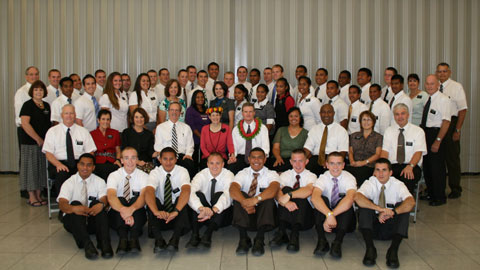 Elder Bednar met with the missionaries serving in the Marshall Islands Majuro Mission.

Elder David A. Bednar of the Quorum of the Twelve Apostles became the first apostle ever to visit Church members in the Republic of the Marshall Islands when he traveled there to reorganize the Majuro Marshall Islands Stake and extend associated callings. Apostles often participate in the organization or reorganization of stakes, using priesthood keys delegated to them by the president of the Church to call a new stake president and counselors according to the inspiration of the Holy Ghost.

Elder Bednar extended a call to Zed Zedhkeia to serve as the new stake president, with Cheta Anien and Bevid Betti as his first and second counselors. Missionary work began in the Marshall Islands in February 1977, and today there are more than 1,100 Latter-day Saints on the island.

“As we travel to the isles of the sea and the uttermost parts of the earth, we see the Church is everywhere. It is firmly established, it is growing, and there are faithful, good people. It is truly miraculous," Elder Bednar said in an interview with the Church News.

Elder Bednar, accompanied by Elder Tad R. Callister of the Pacific Area Presidency and other Church leaders, visited with members and missionaries, delivered humanitarian aid kits to local hospitals, and met with the Acting President of the Marshall Islands, Jack Ading.

He referred to the people of the Marshall Islands as “very warm and welcoming,” noting that “many of these brothers and sisters are first-generation members of the Church. These people have a simple abiding faith in the Savior. They are not diverted by things that do not matter, and they are generous and loving. We have much to learn from these modern-day pioneers who live and serve in areas where the Church is beginning to be established."

The visit to the Republic of the Marshall Islands was the final leg of an assignment that also took Elder Bednar to New Zealand, Tonga, and Hawaii.

Local Public Affairs offices contributed to this report, and some of the material in this report is taken from an article published by the Church News. Read the article.