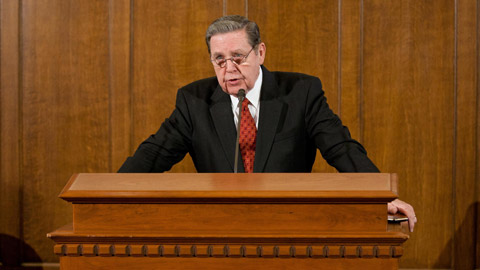 Elder Jeffrey R. Holland of the Quorum of the Twelve Apostles speaks at a news conference following the earthquake and tsunami in Japan.

During times of crisis, an apostle of the Lord Jesus Christ ministers to Heavenly Father’s children both temporally and spiritually. Recent events in Japan offer a powerful example.

Shortly following the earthquake, tsunami, and associated concerns about nuclear radiation, Elder Jeffrey R. Holland of the Quorum of the Twelve Apostles, who had fulfilled assignments in Japan and Korea just a few weeks earlier, held a news conference. He expressed love and support for the people of Japan. He outlined Church efforts to provide relief to all people affected by the disaster and also addressed the welfare of Church members and missionaries.

“These are solemn times, these are sobering times for the world,” Elder Holland said. “We have great concern for everyone. Our prayers are being offered for them, and substantial [Church] financial help has already been committed to the nation.” 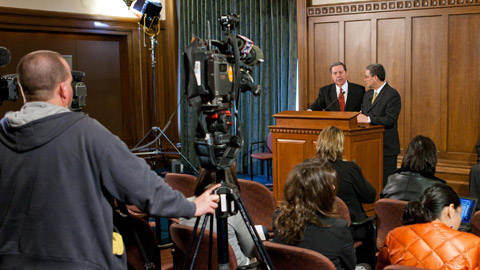 Shortly after the earthquake and tsunami, Elder Holland speaks at a news conference expressing love and support for the people of Japan.

“We want the faith and support and prayerful interest of people all over the globe” to pour out in support of those affected, he said. “Our concern and our prayers, our anxiety, our hopes, and our confidence [are] for all the people of Japan, whether they are Latter-day Saints or not.”

Prophets and apostles throughout the ages have stressed that service to others is at the core of living the gospel. Throughout His ministry, the Savior helped those in both physical and spiritual need. He taught, “Inasmuch as ye have done it unto one of the least of these my brethren, ye have done it unto me” (Matthew 25:40).

Paul, the ancient apostle, said it is the duty of believers to “comfort them which are in any trouble, by the comfort wherewith we ourselves are comforted of God” (2 Corinthians 1:4).

And the prophet Mosiah, in the Book of Mormon, says one of the attributes of godliness is being “willing to mourn with those that mourn; yea, and comfort those that stand in need of comfort” (Mosiah 18:9).

Wherever There Is Need

Today’s prophets and apostles watch over all people, offering reassurance and assistance in times of crisis. They work closely with the Seventy to make sure both spiritual and temporal needs are met (see D&C 107:34, 38), and also work as needed with local leaders. 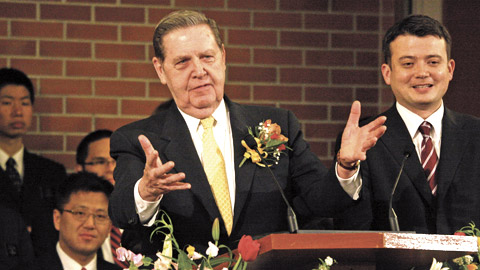 Elder Holland speaks to missionaries and members in Tokyo, Japan several weeks before the earthquake devastated the country.

“I cannot say enough about leaders who have worked through the day and through the night . . . to care for the people,” Elder Holland said concerning local leaders in Japan. “We have bishops that have lost their own homes that are out there trying to find members to help. We have Relief Society presidents who have lost their own homes and they are out their trying to find the sisters and the children and the families.”  He also noted that Latter-day Saints in other parts of the Japan have donated food and blankets to help those in need. He said members and leaders understand the Church’s welfare principles, and that those principles “always work.” 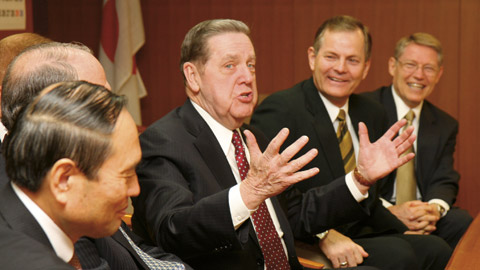 Several weeks before the earthquake and tsunami, Elder Holland shares a story during a meeting with government leaders in Japan.

During February, just before the earthquake, Elder Holland’s ministry had brought him to visit with members, leaders, and missionaries in Japan and Korea. At that time, he expressed his love for them, reassuring them that they are also loved by Heavenly Father and the Savior. Looking back at those meetings now, a statement he made during a blessing he pronounced on the nations of Japan and Korea, along with other island locations in the area, may bring comfort to those who have suffered so much in recent days.

“Father,” he said, “bless the people that they will be responsive to the Spirit, that they will feel a hunger in their heart to find the truth . . . I turn the key again, as keys have been turned before, to bring a new chapter, a higher achievement, greater success in this most important work in the world. Such success can only come from heaven.  We can work hard to prepare the way and deserve success, but the blessings come only from our Father in Heaven.  In that, we honor Him, give praise to Him, vow to be clean and worthy, and diligently labor before Him to see a new era of the gospel rise in this Land of the Rising Sun and neighboring nations.” 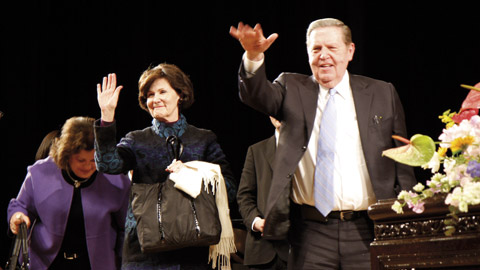 Elder Holland and his wife wave good-bye to members after a meeting in Nagoya, Japan. Elder Holland met with members, leaders, and missionaries in Japan in February.

How does an apostle of the Lord Jesus Christ minister to people in a time of crisis? By following the example of the Savior in relieving temporal and physical distress, by comforting those who are injured, ill, or mourning, and by reminding all people, in good times and in bad, of the love of their Heavenly Father and the blessings promised to those who faithfully live the gospel.