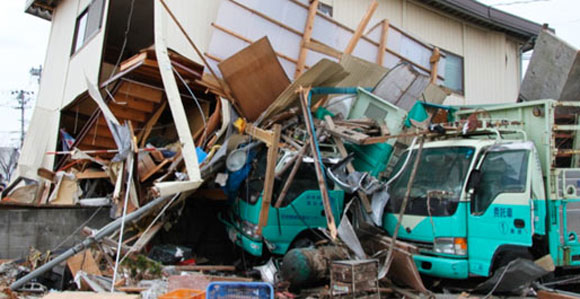 Church members unable to return to their homes following the massive earthquake in Japan are using the Tokyo Temple’s annex chapel as temporary quarters.

Editor’s Note: Updates will be added to the end of this story as new information on the situation in Japan becomes available. Please check back for updates.

On Friday, March 11, 2011 at 2:46 p.m. local time, a magnitude 9.0 earthquake struck off the coast of northern Japan, triggering a massive tsunami with waves as high as 25 feet.

The LDS Disaster response team at Church Headquarters is monitoring the situation and has been in constant contact via “Skype” with the Asia North Area.

Missionaries in the Sendai mission, where communications are down, are still being contacted as of Friday night local time.

All missionaries are safe and accounted for and are being moved away from damaged nuclear power plants.

About 95 percent of members in Japan have been accounted for; however, many of those whom Church leaders are still trying to contact are in the most devastated areas.

As the confirmed death count rises to nearly 3,000, most from the tsunami, search and rescue teams continue to look for thousands who are still missing, even as strong aftershocks continue to trigger more tsunami warnings.

More than four million people are without power, and the extent of damages has made access to clean water and other basic supplies difficult.

Tens of thousands have been displaced from their homes due to the destruction and the threat posed by damaged nuclear power plants.

More than 400,000 people are staying at evacuation centers throughout Japan.

The government of Japan has launched a large-scale emergency response operation. Area leaders are working with government and humanitarian organizations to help provide assistance.

In a press conference on Tuesday, March 15, 2011, Elder Jeffrey R. Holland of the Quorum of the Twelve Apostles expressed sympathy and support on behalf of the Church for all of the people in Japan.

“Our concern and our prayers, our anxiety and our hopes, our confidence is for all the people of Japan, whether they’re Latter-day Saints or not,” Elder Holland emphasized. “Our prayers are being offered in behalf of them, and substantial financial help has already been committed to the nation and to the people, regardless of their religious affiliation. … More will be forthcoming as needed.”

He reported that missionaries in Sendai and Tokyo are being relocated to the north and south regions of Japan, where they will be absorbed into the other existing missions for the time being.

No injuries or deaths have been reported among the membership so far.

Initial visual assessment of Church buildings in Japan shows about half of the meetinghouses in the affected area are damaged. Those that are stable will be considered for use as places of food preparation, distribution, or shelter, as needed.

More than 200,000 residents within a 12-mile radius of the damaged nuclear plants have been evacuated.

The Church has dispatched welfare and priesthood leaders to the affected area to assess needs and to help organize relief efforts. An emergency response specialist from Church headquarters is traveling to Japan to assist with this effort.

Transportation and access to the most devastated areas of Japan remain difficult, with many roads cut off, resulting in food and fuel shortages.

In addition to those evacuated around the nuclear plants, more than 300,000 have been displaced from their homes due to earthquake and tsunami damage.

The confirmed death toll has risen to nearly 4,000 people.

All missionaries have now been moved to their new areas and are far from areas of concern.

The Church is asking that those desiring to help do not contact the area offices in  Japan, but rather, go through the humanitarian fund.

The death toll from last week’s 9.0-magnitude earthquake and the ensuing tsunami in Japan is approaching 7,000. Another 10,000 people are still missing. Search and rescue efforts continue. More than 400,000 people are staying in some 2,500 shelters.

Water, electricity, and cell phone service are being restored in most areas, but there continues to be a shortage of gas and kerosene for transportation heating, which is also hindering efforts to distribute relief supplies.

The government has raised the alert level at the Fukushima Daiichi nuclear plant to five. (Seven is the most severe.) Twenty-three church buildings in the affected areas have sustained varying degrees of damage.

Member of the Area Presidency will join the team already on the ground, which includes an Area Seventy and the area welfare manager, to help direct Church leaders’ efforts to assist members. Member volunteers from other stakes are gathering relief items and being organized to travel to the Sendai area to help with supply delivery and cleanup. The area office is working to procure additional relief supplies and gasoline to deliver to the affected areas.

The death toll resulting from the March 11 earthquake and subsequent tsunami in northern Japan has surpassed 9,000. Approximately 13,000 are listed as missing. The large majority of members in the affected areas have now been accounted for, and there have been no reports of deaths or injuries. Priesthood leaders continue to search for those members who have not yet been located.

Electricity and cell phone service have been widely restored, but there are still many households without running water, gasoline, and heating fuel. Member volunteers have been distributing food, water, blankets, bedding, and clothing. The Church has procured 4,000 liters of fuel to assist with distribution efforts.

Church leaders in the area have established an emergency response committee, which is meeting daily to identify and respond to member and community needs and to organize volunteer efforts. Projects are being organized this week to assemble hygiene and cleaning kits. Over the weekend, the area presidency visited members in six wards and branches in the heavily affected areas.

The nuclear reactors damaged by the quake and tsunami have stabilized, but the situation remains tense with the contamination of water, food, and the environment in the Fukushima area.

More than 11,000 deaths have been confirmed. More than 17,000 are missing. Priesthood leaders continue to search for members not yet located. Young single adults are volunteering time to find missing members using the Internet, social media, and other forms of electronic communication. Many members have been located through their efforts.

Many basic services have been restored; however, gasoline and heating fuel are still in short supply. The government has begun building temporary housing, and the number of individuals in shelters has decreased to approximately 180,000. The Church has distributed more than 70 tons of supplies, including food, water, blankets, bedding, hygiene items, clothing, and fuel. More than 10,000 liters of fuel have been purchased and distributed to Church leaders, affected members, and other relief organizations. Members are delivering aid via Church-provided scooters to areas that are difficult to reach by car. Service projects to assemble hygiene kits and cleaning kits are being organized in multiple stakes and ward in Tokyo, Nagoya, and Osaka. More than 40,000 hours of service have been donated by more than 4,000 volunteers.

Damages are expected to exceed $300 billion, making this the most expensive disaster in history.

On April 7, 2011, a 7.1-magnitude aftershock originated near the epicenter of the original 9.0-magnitude earthquake that struck Japan on March 11. At least three people were killed, and numerous buildings sustained minor damage. A tsunami warning was issued, then later cancelled.

The Japanese and U.S. military forces are working to recover missing bodies.

The number of people affected by this disaster is estimated at 68 million.

The Fukushima Daiichi nuclear plant continues to be of concern. A group of experts from around the world are on location and working to find a solution, which could take weeks.

Most Church members have been accounted for with no deaths or injuries reported. Priesthood leaders continue to search for other members who have not yet been located.

More than 7,000 Church members have donated more than 60,000 hours of work to relief efforts in Japan.

Six weeks after a 9.0 earthquake and the ensuing tsunami hit Japan, some missionaries are set to return to areas of the Japan Tokyo and Japan Sendai Missions. (Read the Newsroom report.)

Approximately 200 missionaries were removed from these missions shortly after the disaster as a safety precaution and in order to lessen the burden of others, but the area is now considered safe. Missionaries will enter the less-devastated areas of Sendai and Tokyo in the near future.

The Church continues to assist the people of Japan through monetary donations, supplies, and service by its Japanese members.

Nearly seven weeks after the disaster, efforts in Japan are changing from emergency response to longer-term recovery, but the current and future situation remains critical as hundreds of thousands of people have lost homes and jobs, and officials reported the situation at the Fukushima Daiichi nuclear plan could remain unstable for months.

All missionaries are safe, and the majority of Church members have been accounted for with no deaths or injuries. More than 14,506 deaths are confirmed, with more than 11,353 still missing.

Approximately 129,000 evacuees are still residing in 2,550 evacuation centers—353,000 homes were damaged or destroyed.

An estimated 68 million people have been affected by the disaster, and Japanese officials said it could take more than a decade to rebuild.