Church Volunteers in Japan Use Internet to Locate Missing People 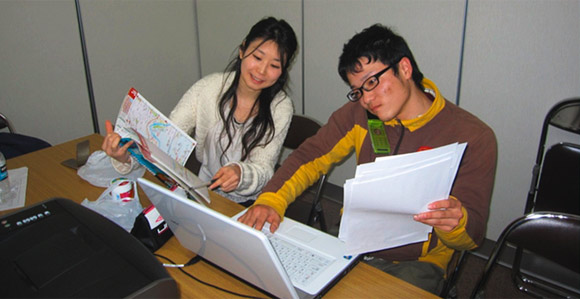 In Japan, volunteers used the Internet and social media to reunite families and loved ones following March’s 9.0-magnitude earthquake.

“It was inspiring to watch the Church members in Japan put modern technology to good use in locating members and missionaries in such a quick manner.” —Nate Leishman, LDS humanitarian disaster response manager

In recent years, Church leaders have encouraged members to use the Internet to share the gospel, find people ready to learn about the Church, and bring them to the missionaries. Following the massive earthquake in Japan in March, though, a small group of Latter-day Saints in Japan began using the Internet to find missionaries and members and bring them to the local meetinghouses.

On Friday, March 11, 2011, a magnitude-9.0 earthquake struck off the coast of northern Japan, shaking buildings to the ground and triggering a tsunami. With most phone communication down, local Church leaders and member volunteers worked around the clock to establish contact with missionaries and members in the devastated areas using any means possible, including the Internet.

Two of those volunteers were Momoko Yamashita, 32, of the Japan Yokohama Stake, and Mieko Takahashi, 38, of the Japan Tokyo Stake. Almost immediately after the disaster, these sisters used their Internet, social media, and communication skills to join the efforts of others in searching for the missing.

Such ingenuity wasn’t their own doing, though, Sister Yamashita acknowledged. “We would try any small thought or idea or prompting that came to us,” she said. “Just being able to do something calmed us, and having the Spirit’s guidance really gave us peace.”

Another way the sisters helped was through social networking sites. People staying at evacuation centers would write their names on bulletin boards. Photos of those boards were uploaded to the Internet, and volunteers typed those names into spreadsheets, also available online. Sister Takahashi and others accessed these lists and used social networking sites, including Twitter and Mixi, a Japanese networking site similar to Facebook, to search for the names of people who had been reported missing.

With these sisters’ help, all missionaries were accounted for within 24 hours. Within three days, local leaders and volunteers were able to assess the situation of 95 percent of Church members in Japan. Missionaries have since been moved out of the most devastated areas to nearby missions in Japan.

The work in Japan continues, Sister Yamashita said. She and others continue to help locate Church members, relocate missionaries, and assist in disaster relief efforts.

“It was inspiring to watch the Church members in Japan put modern technology to good use in locating members and missionaries in such a quick manner,” said Nate Leishman, LDS humanitarian disaster response manager. “The use of social media to locate members and others in Japan is a great example of how the power of the Internet can be used to assist the Church in disaster relief efforts. I am grateful for the members in Japan who took the initiative and time to assist Church leaders in this effort.”