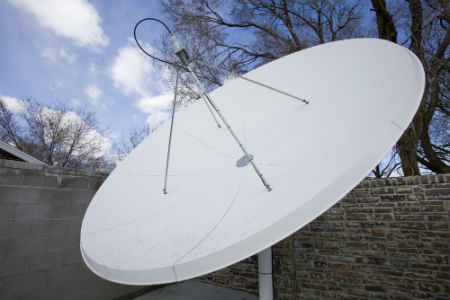 Viewing Church broadcast events via satellite is ideal for local units that either currently own satellite equipment or where broadband Internet is unobtainable. While the stake technology specialist is responsible for setting up satellite broadcasts, the local FM group is primarily responsible for the care and maintenance of the satellite and video systems.

In most circumstances, the sound and video systems are permanently installed and tied into the satellite system. They have few, if any, user-serviceable parts. If a meetinghouse does not already have a satellite system, service should be requested through the local FM group. They will decide if the building qualifies for installation and if it is within their project budget.

Preparing the Satellite System for a Broadcast

Satellite systems in meetinghouses vary depending on the needs of the local unit. They range in complexity from a simple TV screen in the chapel to distributed systems with multiple TV channels and language options available throughout the building. Operator instructions are available in each building with a satellite system.

For help setting up a satellite system or troubleshooting an issue, contact Global Service Center—IT Support.

For help setting up a satellite system or troubleshooting satellite issues, contact the area office.

Satellite systems should be tested at least two weeks prior to a broadcast event. To test that the different components of a system work and that the system is set up correctly, everything should be set up as it will be for the broadcast. Each TV channel and display location that will be used should be tested. If problems are encountered, the local FM group should be notified. Two weeks’ notice should give the FM group time to have the satellite system serviced and to correct any known issues before the broadcast.

The Church has over the years used many different types of satellite dishes. Unless the existing dish has been damaged, there is no need to have the dish replaced. Today, depending on the location, one of three types of dishes is installed:

Satellite Signals around the World

The Church maintains worldwide satellite carriers. While multiple carriers may be available in any given location, specific carriers have been designated for use in specific locations around the world. The meetinghouse’s location will determine which satellite carrier it uses. While most broadcasts are available around the world at the same time, some broadcasts, such as rebroadcasts, temple dedications, and regional broadcasts, are time- and region-specific. Hence, location will determine which broadcasts are available and when. Additionally, when a large number of broadcasts occur at the same time, extra carriers may be brought online as needed.

Satellite broadcast methods are extremely robust and have few transmission interruptions. In most cases, problems with satellite reception are a local issue. Local issues are normally the result of the failure of electronics or infrastructure items such as the satellite dish. Regional issues may be caused by power outages, solar interference, and weather-related rain fade. Global outages are rare and by nature are not easily categorized.

The local FM group can be contacted during the week to help with troubleshooting an installation. For help during a broadcast, contact Global Service Center—IT Support. As call volume is high during broadcasts, wait times can be long. Last-minute issues can be avoided by testing the system early.