Viewpoint: The Kingdom of God Continues to March Forth 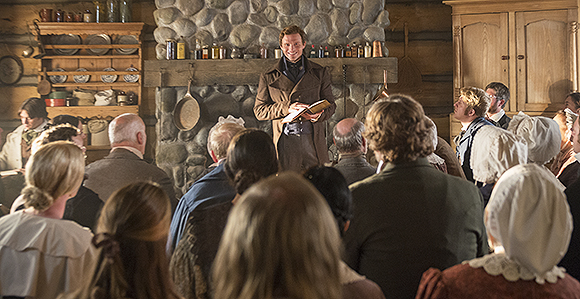 On April 6, 1830, Joseph Smith and more than 50 other people met at the log home of Peter Whitmer Sr. in Fayette, New York, with plans to organize the Lord’s restored Church.

“Persecutions have raged. Calumny and lies and misrepresentation have attempted to defame. But in every decade from the time of the Restoration forward, the truth of God has gone ‘forth boldly, nobly, and independent.’” —Elder M. Russell Ballard of the Quorum of the Twelve Apostles

The Lord revealed the name of the Church to the Prophet Joseph. “For thus shall my church be called in the last days, even The Church of Jesus Christ of Latter-day Saints” (D&C 115:4).

The organization of the Church of Jesus Christ in 1830 was one of the great miracles of the latter days. That small meeting in Fayette, New York, went almost unnoticed. But the events of that day have changed the world.

Years later, President Wilford Woodruff told of a meeting in which the Prophet Joseph Smith prophesied of the Church’s growth, according to the Doctrine and Covenants and Church History: Gospel Doctrine Teacher’s Manual. The meeting was in “a small house, perhaps 14 feet square. But it held the whole of the Priesthood of the Church of Jesus Christ of Latter-day Saints who were then in the town of Kirtland, and who had gathered together to go off in Zion’s camp.” After several of the men had shared testimonies of the work, the Prophet said:

“Brethren I have been very much edified and instructed in your testimonies here tonight, but I want to say to you before the Lord, that you know no more concerning the destinies of this Church and kingdom than a babe upon its mother’s lap. You don’t comprehend it. … It is only a little handful of Priesthood you see here tonight, but this Church will fill North and South America—it will fill the world” (Lesson 9: “The Only True and Living Church”).

Today there are nearly 15.9 million members gathering in more than 30,000 congregations across the globe. The Church has built 156 temples, and Church materials are published in 188 different languages. Some 70,000 missionaries, trained in 15 missionary training centers, serve in 422 missions. Since 1985, 189 countries have received humanitarian aid from The Church of Jesus Christ of Latter-day Saints.

And this week, 127 mission presidents and their wives—from 24 different countries—gathered in the Provo Missionary Training Center for the 2017 Seminar for New Mission Presidents. (See related story.) They have been called by Jesus Christ “to take His gospel and His love to His Father’s children,” said President Henry B. Eyring of the First Presidency during the seminar. (See related story.)

The gospel marching forth—with the help of faithful missionaries across the globe from past and future generations—is a fulfillment of prophecy. Missionaries who will serve with the new mission presidents and every other member of the restored Church of Jesus Christ are witnessing a miracle.

“Do you realize that the restored Church was 98 years old before it had 100 stakes?” questioned President Thomas S. Monson in his June 2014 First Presidency Message. “But less than 30 years later, the Church had organized its second 100 stakes. And only eight years after that the Church had more than 300 stakes. Today we are more than 3,000 stakes strong. Why is this growth taking place at an accelerated rate? Is it because we are better known? Is it because we have lovely chapels?

“These things are important, but the reason the Church is growing today is that the Lord indicated it would. In the Doctrine and Covenants, He said, ‘Behold, I will hasten my work in its time’ (D&C 88:73).”

“A marvelous and wonderful thing is coming to pass,” said President Gordon B. Hinckley during his October 2007 general conference address. “The Lord is fulfilling His promise that His gospel shall be as the stone cut out of the mountain without hands which would roll forth and fill the whole earth, as Daniel saw in vision (Daniel 2:31–45; D&C 65:2). A great miracle is taking place right before our eyes.”

Quoting Doctrine and Covenants 3:1–3, Elder M. Russell Ballard of the Quorum of the Twelve Apostles said during his October 2008 general conference address that the truth of God shall go forth.

“God has spoken through His prophet and announced to the world that ‘the Standard of Truth has been erected’ and that ‘no unhallowed hand can stop the work from progressing,’” said Elder Ballard. “That is undeniably and indisputably true. We have seen it for ourselves, in decade after decade, from the time of the Prophet Joseph Smith to the time of President Thomas S. Monson.

“Persecutions have raged. Calumny and lies and misrepresentation have attempted to defame. But in every decade from the time of the Restoration forward, the truth of God has gone ‘forth boldly, nobly, and independent.’ The little Church that started in 1830 with just a handful of members has now grown … and we are well on our way to penetrating every continent, visiting every clime, sweeping every country, and sounding in every ear.

“This is God’s work, and God’s work will not be frustrated.”

Did the more than 50 people gathered in the log home in Fayette, New York, know of this grand future? Did the five men who would, with the Prophet Joseph Smith, become the first official members of the Church—all of whom had been baptized and had seen the gold plates—understand what they were setting in motion? Do we understand the profound impact of the work and Church across the world today?

President Hinckley said when we look at the progress of the Church in our day, it is truly astounding (“We Have a Work to Do,” Ensign, Feb. 1988).

“The God of heaven has brought to pass this latter-day miracle, and what we have seen is but a foretaste of greater things yet to come,” he said.