President Henry B. Eyring, First Counselor in the First Presidency, speaks at the 2017 Seminar for New Mission Presidents at the missionary training center in Provo, Utah.

“The Lord and the missionaries’ families have trusted you to help them find, teach, and bring others to the gospel and also to help those missionaries become deeply converted and enduring members of the Lord’s true Church.” —President Henry B. Eyring

It is a mission president’s responsibility to see that every missionary who serves under his direction grows in spirituality and capacity to invite people to repent and to come unto Jesus Christ with faith in Him and take His name upon them, said President Henry B. Eyring on June 25.

“We are in His service, called by Him to help take His gospel and His love to Heavenly Father’s children,” said President Eyring, First Counselor in the First Presidency. “Sharing the gospel and the love of the Lord is a call you received when you were baptized. You promised then—by covenant—to be the Savior’s witness in every place you would be in.”

Speaking during the 2017 Seminar for New Mission Presidents, President Eyring addressed “Simple Truths for Your Service.”

Calls will be magnified

He promised the new mission leaders that during their service as mission presidents and as missionary companions, their call to bring others to Him will be magnified. “The Lord and the missionaries’ families have trusted you to help them find, teach, and bring others to the gospel and also to help those missionaries become deeply converted and enduring members of the Lord’s true Church,” he said.

All of that “changing and converting” must be done while resisting “the fierce opposition of Lucifer,” who knows the purpose of their call and the call of their missionaries and opposes that sacred work.

“My purpose today is to assure you that opposition, which you will surely face, is another evidence that you are on the Lord’s errand and in His hands,” said President Eyring. “You will have trials to face—at times very difficult trials. …

“I can testify that you will succeed against any opposition in fulfilling the great trust you have accepted with such faith and enthusiasm.”

1. The Lord called you

First, “you can take courage from the fact that the Lord called you,” he said. “He has known and watched over you throughout your life—and long before. He knows you, and He knows your capabilities. But more than knowing your present circumstances, He knows your heart and your capacity to grow. … You can be sure the Lord has called you personally to succeed in the tasks He has prepared for you.”

2. The Lord called these missionaries to serve with you

Second, “the Savior has prepared and will call the missionaries who will come to be led and cared for by you,” President Eyring told the mission presidents. “Just as the Father and the Son know you perfectly, They know every missionary—his or her capacities, desires, fears, and faith. And They love your missionaries perfectly, so you can be sure those elders and sisters will not come to you by chance.”

The Father and the Son know in advance what help missionaries will need to rise to their full potential in their service, he said.

“Your missionaries may think, when they open that letter from the living prophet, that they were called to a nation, or a mission, or to teach in a language. They were. But more important to their lives will be the assignment to serve with you.”

President Eyring counseled the new mission presidents not to ask departing mission presidents to talk much about individual missionaries. “You will instead trust the Spirit to help you discern who they are and what they need,” he said. “The first contact you have with each of them is an opportunity for you to pray to know their hearts.” 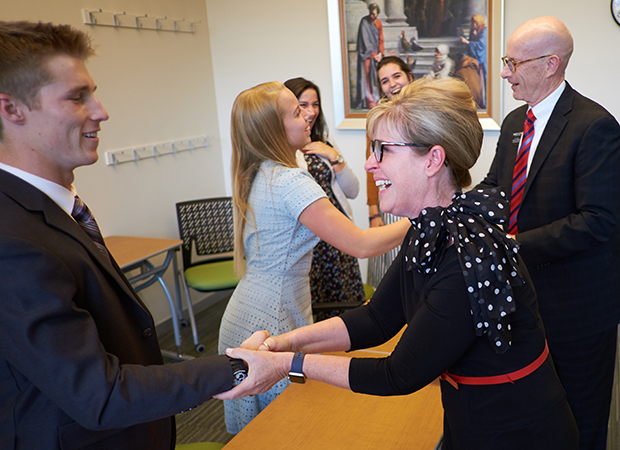 A mission president and his wife greet missionaries during the 2017 Seminar for New Mission Presidents.

3. It is the Lord who assigns the missionaries

Third, “you and your missionaries need confidence that it is the Lord who assigns each of them to teaching areas, to companions, and to language assignments,” said President Eyring.

President Eyring said his assurance of mission presidents being able to make those inspired assignments comes from years of experience in the Quorum of the Twelve Apostles. “Regularly I was asked to recommend a specific mission and language for missionaries who were to be called by the Lord’s prophet. From the first time I approached this process, I sought revelation about the assignments, and I was amazed to see the Lord’s hand in every call.

“My time to consider each assignment was, at most, a few minutes for every missionary. I had two computer screens to give me information. One screen gave some facts taken from the missionary’s recommendation papers. The other screen showed the missions of the Church and their needs for new missionaries.”

At the end of every session, President Eyring said he felt “absolute assurance” that the Lord had made each assignment.

A few times, President Eyring said he stopped the process after having pushed the button to finalize a call and asked to reconsider. “I still remember the sweet feeling of gratitude when the name and face came back on the screen, and I felt a quiet sense of peace when I made the change.”

He promised the mission presidents that they can have such experiences as they make assignments. “Your keys authorize you presidents with the right to hear the voice of revelation.”

All missionaries can truly “be an instrument in the hands of God to bring … their brethren [and sisters and themselves] … to the knowledge of the truth” (see Alma 17:9), said President Eyring.

Concluding, President Eyring reminded the mission presidents of the sacrament covenants they had made that day.

President Eyring said partaking of the sacrament gave him courage and determination.

“My prayer is that you, your missionaries, and those they teach will often have the blessing we had today of partaking of the sacrament,” he said.

He then asked the mission leaders to “go forward with confidence, nothing doubting.

“God has called you. We will remember you in our prayers, in our homes, and in the temples of God. We shall remember you wherever you serve, as will the Lord,” he said. 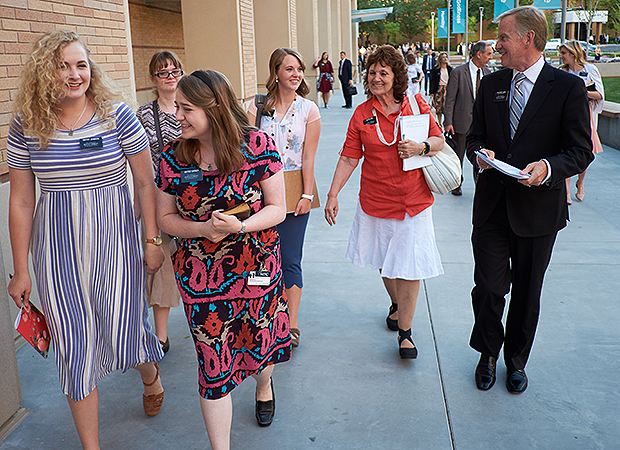 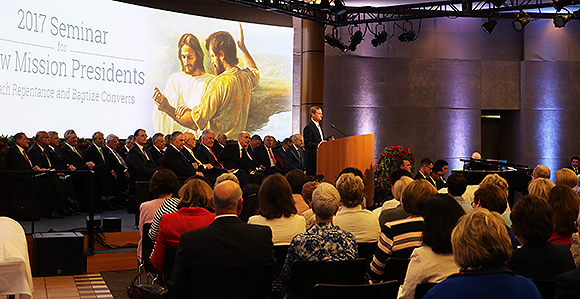 Couples attending a meeting of the 2017 Seminar for New Mission Presidents June 25. 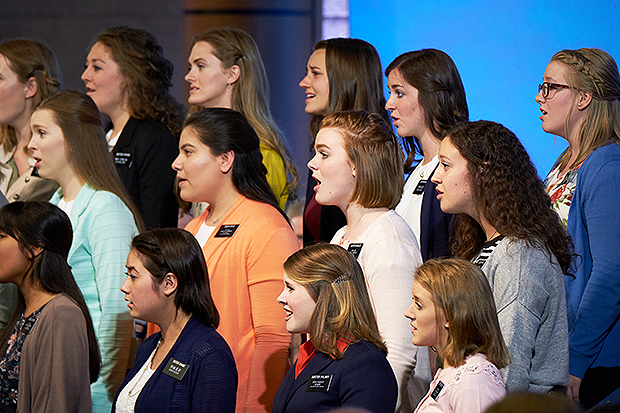 A choir of missionaries sings during the 2017 Seminar for New Mission Presidents.