Viewpoint: Testimonies of the Book of Mormon 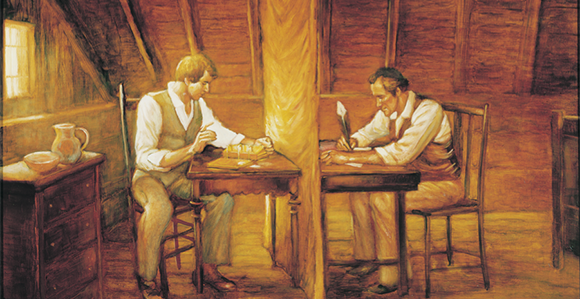 Joseph Smith translates the Book of Mormon while Oliver Cowdery acts as scribe.

“It is my testimony that the Book of Mormon changes lives. May each of us read it and reread it. And may we joyfully share our testimonies of its precious promises with all of God’s children.” —President Thomas S. Monson

Much has been said and written about the Book of Mormon since it was printed in Palmyra, New York, in 1830. The initial printing of 5,000 copies facilitated the conversions and solidified the testimonies of many early members of the Church. In the introduction to the book, Joseph Smith called it the ”keystone of our religion.”

For example, Emma Smith often helped her husband as a scribe with the translation of the Book of Mormon and was amazed at his ability to translate despite having so little education. She said, “When he stopped for any purpose at any time he would, when he commenced again, begin where he left off without any hesitation, and one time while he was translating he stopped suddenly, pale as a sheet, and said, ‘Emma, did Jerusalem have walls around it?’ When I answered, ‘Yes,’ he replied, ‘Oh! [I didn’t know.] I was afraid I had been deceived.’ He had such a limited knowledge of history at that time that he did not even know that Jerusalem was surrounded by walls” (Edmund C. Briggs, “A Visit to Nauvoo in 1856,” Journal of History, Jan. 1916, p. 454).

Martin Harris also served as a scribe to the Prophet Joseph Smith and even tried to test the reality of his prophetic gifts. The Millennial Star reported, “From April 12 to June 14, Joseph translated while Martin wrote, with only a curtain between them. On occasion they took breaks from the arduous task, sometimes going to the river and throwing stones. Once Martin found a rock closely resembling the seerstone Joseph sometimes used in place of the interpreters and substituted it without the Prophet’s knowledge.

“When the translation resumed, Joseph paused for a long time and then exclaimed, ‘Martin, what is the matter, all is as dark as Egypt.’ Martin then confessed that he wished to ‘stop the mouths of fools’ who told him that the Prophet memorized sentences and merely repeated them” (Millennial Star, 44:87; Kenneth Godfrey, “A New Prophet and a New Scripture: The Coming Forth of the Book of Mormon,” Ensign, Jan. 1988).

Parley P. Pratt, an early convert to the Church, gained his testimony in the same manner as many members do today. On September 7, 1856, he told a group of Saints at the old bowery in Salt Lake: “I was convinced that it was true; and the Spirit of the Lord came upon me, while I read, and enlightened my mind, convinced my judgment, and riveted the truth upon my understanding, so that I knew that the book was true, just as well as a man knows the daylight from the dark night, or any other thing that can be implanted in his understanding. I did not know it by any audible voice from heaven, by any ministration of an angel, by any open vision; but I knew it by the spirit of understanding in my heart—by the light that was in me” (Reminiscences and Testimony of Parley P. Pratt, p. 193, 1856).

Speaking about Joseph and Hyrum Smith in Carthage Jail, Elder Jeffrey R. Holland of the Quorum of the Twelve Apostles tied his own testimony to those early leaders who gave their testimonies in blood. He said, “As one of a thousand elements of my own testimony of the divinity of the Book of Mormon, I submit this as yet one more evidence of its truthfulness. In this their greatest—and last—hour of need, I ask you: would these men blaspheme before God by continuing to fix their lives, their honor, and their own search for eternal salvation on a book (and by implication a church and a ministry) they had fictitiously created out of whole cloth?” (“Safety for the Soul,” Oct. 2009 general conference).

In the same talk, Elder Holland explained how anyone can gain greater faith in the gospel message. “I testify that one cannot come to full faith in this latter-day work—and thereby find the fullest measure of peace and comfort in these, our times—until he or she embraces the divinity of the Book of Mormon and the Lord Jesus Christ, of whom it testifies,” he said.

In general conference in October 1988, President Ezra Taft Benson taught that we should “flood the earth with the Book of Mormon,” and nothing illustrates this more than a report from MormonNewsroom.org 23 years later, in 2011 stating: “The 150 millionth copy of the Book of Mormon was recently printed, passing another milestone in the book’s 181-year history.” Further, the Ensign magazine reported in May of 2015 that the Book of Mormon had been translated into 110 languages with the addition of the Kosraean Book of Mormon.

And our current prophet, President Thomas S. Monson, added his own testimony of the Book of Mormon to those of his predecessors: “With other latter-day prophets, I testify of the truthfulness of this ‘most correct of any book on earth,’ even the Book of Mormon, another testament of Jesus Christ. Its message spans the earth and brings its readers to a knowledge of the truth. It is my testimony that the Book of Mormon changes lives. May each of us read it and reread it. And may we joyfully share our testimonies of its precious promises with all of God’s children” (“Precious Promises of the Book of Mormon,” Ensign, Oct. 2011).