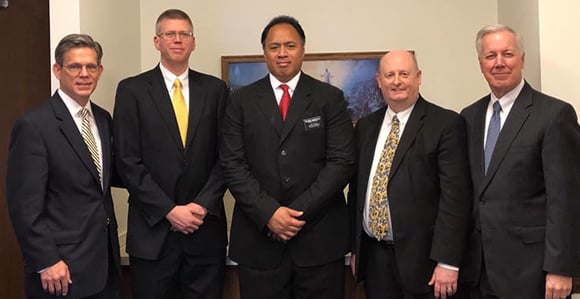 “All of the leadership principles that I know are principles I learned in Church—those things like working in a priesthood quorum and learning how to lead like the Savior leads.” —Ken Niumatalolo, United States Naval Academy head football coach

Ken Niumatalolo, the veteran head football coach at the United States Naval Academy, was called January 20 to preside over the Annapolis Maryland Stake.

President Niumatalolo and his Church affiliation are well-known both inside and outside Latter-day Saint circles, thanks to his success on the college gridiron and his prominent role in the Church-produced documentary Meet the Mormons.

Many in the college football world will likely ask how the coach of a Division 1 program will be able to manage his professional duties and a demanding ecclesiastical calling.

But President Niumatalolo, 53, has long proven an adroit time manager when it comes to faith, family, and football.

He has served in a bishopric and as a high councilor in the Annapolis Maryland Stake, where he utilized the Spanish skills he learned on a full-time mission during his recent assignment in the stake’s Spanish-language branch.

At the time of his new calling as stake president, President Niumatalolo was serving as the second counselor in the Washington D.C. North Mission.

“One of the miracles of the restored gospel is that two Seventies can come into a stake without knowing anyone and, after a series of very short interviews, can receive revelation as to who the Lord has chosen to lead that stake,” he wrote in an email. “In the reorganization of the Annapolis Maryland Stake this weekend, it was crystal clear that President Niumatalolo was prepared and called by the Lord. We were grateful to witness that miracle.”

“President Niumatalolo is a very high-profile college football coach, but we found him to be a humble and devoted disciple of Jesus Christ. He and his wife, Barbara, are faithful members of the Church, and he will serve well as the new president of the Annapolis Maryland Stake. We were very pleased to be part of the process of identifying who the Lord had already chosen as the new stake president.”

The coach/stake president is also a committed family man. As Meet the Mormons audiences learned, he and his wife, Barbara, are the parents of three adult children. The Niumatalolos also recently became grandparents.

“I’m very proud to be the head football coach at the U.S. Naval Academy; it’s a great responsibility and I love the job,” he said in a 2017 Church News profile. “But it’s not the most important thing. Number one is being a husband and a father.”

Annapolis-area Latter-day Saints have witnessed firsthand President Niumatalolo’s devotion to faith and family. He doesn’t work on Sundays—even during the hectic months of the season. His scandal-free success at Navy has also earned him high regard as a leader and a sought-out speaker at business conferences, coaching clinics, and youth gatherings.

“All of the leadership principles that I know are principles I learned in Church—those things like working in a priesthood quorum and learning how to lead like the Savior leads,” he told the Church News.

While serving as military missionaries in Annapolis, Reid and Shirley Chambers invited the popular coach to speak to the Latter-day Saint “plebes” who were beginning their training at the military academy.

President Niumatalolo reminded the young plebes that the most important thing they could be was disciples of Christ.

“In his message to the midshipmen, he said that earning titles and ranks was nice—but they should first strive to be righteous [Latter-day Saints],” Reid Chambers said.

The Chambers also witnessed Niumatalolo’s humility when he was once invited to pass the sacrament with several young deacons in the Spanish-language branch.

“Here he was, one of the most respected football coaches in the nation, but you could tell he was so honored to pass the sacrament with those deacons,” Reid Chambers said.

The Niumatalolos have also been known to invite Latter-day Saint midshipmen to their Annapolis home to watch general conference and enjoy a home-cooked meal.