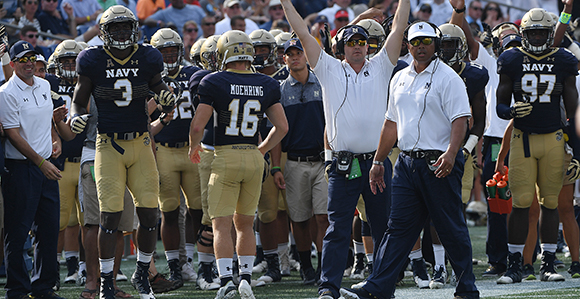 “All of the leadership principles that I know are principles I learned in church—those things like working in a priesthood quorum and learning how to lead like the Savior leads.” —Ken Niumatalolo, Navy football coach

A multilevel shelf behind the coach’s desk is lined with commemorative football helmets, Army-Navy game balls, and fist-sized reproductions of Navy bowl rings.

Hanging on an inside wall is a large photo of smiling midshipmen at the White House receiving the Commander-in-Chief’s Trophy from, well, then commander-in-chief, Barack Obama.

And a full-length window offers a broad view of the Spa Creek Inlet. The founders of the U.S. Naval Academy, back in 1845, didn’t select its locale to attract star high school defensive ends and quarterbacks—but it’s an enticing site just the same.

But it’s the smaller items atop Niumatalolo’s desk that are most important to Navy’s all-time winningest football coach.

Counted among his personal mementos are portrayals of Christ and the Book of Mormon’s Captain Moroni, a CTR logo, and a quote about curbing one’s anger from President Gordon B. Hinckley. A copy of a general conference talk about the priesthood from President Dieter F. Uchtdorf, Second Counselor in the First Presidency, rests under a paperweight. And there’s also a recently published compilation of writings from the First Presidency and the Quorum of the Twelve Apostles.

“I keep these things in my office so I never forget who I am,” he said.

So who is Ken Niumatalolo? The answer depends on whom you ask.

Coach Niumatalolo is comfortable with any and all of those answers. At age 51 and almost a decade into his head coaching tenure at Navy, he’s never felt a need to compartmentalize his professional, family, cultural, and religious identities.

Meet the Mormons was a life changer for him and his wife, Barbara, and their three children—Alexcia, Va’a, and Ali’i. More people saw the film than he could have imagined. He’s still stopped at airports by passengers who recognize him as the “football guy” from the Mormon flick.

As the head football coach at a highly visible U.S. service academy, Coach Niumatalolo recruits athletes from many backgrounds. Each day he works alongside people who practice a variety of religious traditions—or none at all. A coach in his position might be understandably reluctant to be so open about his or her convictions.

But Coach Niumatalolo has never second guessed appearing in the film.

“I don’t force my beliefs on anyone, but this is how I believe,” he said. “If you believe differently, I respect your beliefs. I would just hope that people would give me the same benefit to allow me to believe how I believe. It’s what makes our country great—to be able to worship how we want.”

As head coach, he’s led Navy to five Commander-in-Chief’s Trophies awarded each season to the top service academy team in the nation. He beat rival Army eight straight years before dropping last year’s game to the Black Knights. And last season his Midshipmen defeated storied Notre Dame for the third time under his watch.

But the wins, the bowl games, the awards, and, yes, the lofty paycheck remain secondary elements of his life.

“I’m very proud to be the head football coach at the U.S. Naval Academy. It’s a great responsibility and I love the job, but it’s not the most important thing. Number one is being a husband and a father.”

Life outside the gridiron

Meet the Mormons introduced a global audience to the Niumatalolos. They were filmed having fun together at home, worshipping at church, and, of course, gathering at Navy-Marine Corps Memorial Stadium for Navy football games.

The post-film years have been eventful for the entire family. Daughter Alexcia is a flight attendant living in Hawaii. Son Va’a is a linebacker at BYU preparing for his senior season. He and his wife, Kenzie, are expecting a baby this summer. Coach Ken will soon be a grandpa.

Meanwhile, youngest son Ali’i served a mission to Chile and is enrolled at the University of Utah, where he’ll play football.

You read that right—the Niumatalolos are a mixed-Cougar/Ute family. “There will be red and blue on both sides of the dinner table,” laughed the coach.

Each Sunday he puts to use the language skills he learned as a Spanish-speaking missionary in California, serving as the high councilor in Annapolis’s Spanish-language branch. Sister Niumatalolo works in the Primary.

“It’s been a rewarding calling for both of us,” he said.

Annapolis Maryland Stake President John Jackson said the coach—like any good Navy man—adroitly navigates the demands of his profession and the duties of his faith.

“In any job that Ken’s done, he’s put the Lord first,” said President Jackson. “Everything else just seems to fall into place.”

The members of the Spa Creek Branch, he added, “sincerely love the Niumatalolos.”

Prayerful time management has kept Coach Niumatalolo in the college coaching business. As a young assistant, intent on establishing his bonafides, he usually left home for the football office when his children were still asleep. When he returned late that evening the kids were already in bed.

Such burdens, he said, “almost forced me out of the profession.”

But as a head coach, he’s been able to strike a football-family-faith balance that works. The hours are still long—“I get to the office at 3 or 4 in the morning”—but he’s home in time for supper.

The coach’s scandal-free success at Navy has earned him high regard as a leader. He’s sought out to speak at business conferences, coaching clinics, and youth gatherings.

“All of the leadership principles that I know are principles I learned in church—those things like working in a priesthood quorum and learning how to lead like the Savior leads.”

A coach in demand

So how close did he come to leaving Annapolis for Provo?

“I came very close—I was very interested. That’s why I went for an interview,” he said.

But leaving Navy for another coaching position, he explained, “would have to work out on both sides, for them and for me. I’m not going to jump just to jump. I have a great job. I work at a great place. I coach great kids and I make more money than I ever thought I would make.”

He remains appreciative of BYU’s interest.

“I had a really good talk with the people at BYU,” he said. “[Athletic director] Tom Holmoe is a good man and they are good people. But in the end, they had to feel right and I had to feel right. It had to be right on both sides.”

Ultimately, he added, things worked out for the best.

Now back to Coach Niumatalolo’s desktop.

The Mormon-themed quotes and imagery help keep him grounded during the most harried moments of a college football season.

His workday begins with a few minutes of study from the scriptures. Then he prays for guidance on how to lead his team.

“We’ve been very successful,” he said. “But I know where my success comes from. It comes from being obedient and honoring my covenants. The Lord has blessed me, and I’m not ashamed to say that.”

Like most people, Ken Niumatalolo deals with a daily time deficit. There are simply not enough minutes in the day to do all he wants. So, following the counsel of Elder Dallin H. Oaks of the Quorum of the Twelve Apostles, he determines what’s good, what’s better, and what’s best. Then he focuses his attention on the best.

He’s proud of the growing number of fellow Latter-day Saints enjoying success in the college coaching ranks. When a visitor asks what time-earned counsel he would share with them, he pauses for a moment before offering a humble response:

“Stay true to your covenants and values. Do that and you’ll be fine.” 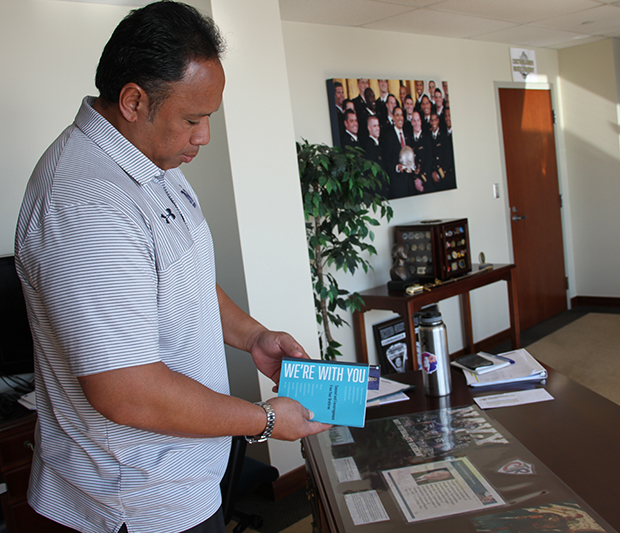 Navy football coach Ken Niumatalolo looks over the many LDS-themed items and images on his desk in his Annapolis office. Photo by Jason Swensen. 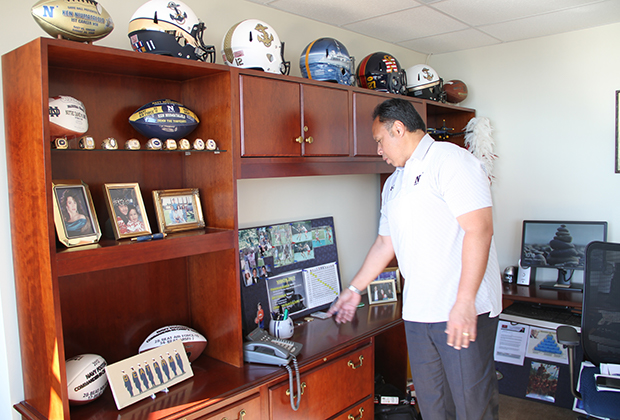 A multilayered shelf in Navy coach Ken Niumatalolo’s office is adorned with football helmets and other memorabilia reflective of his success at the U.S. service academy in Annapolis. Photo by Jason Swensen. 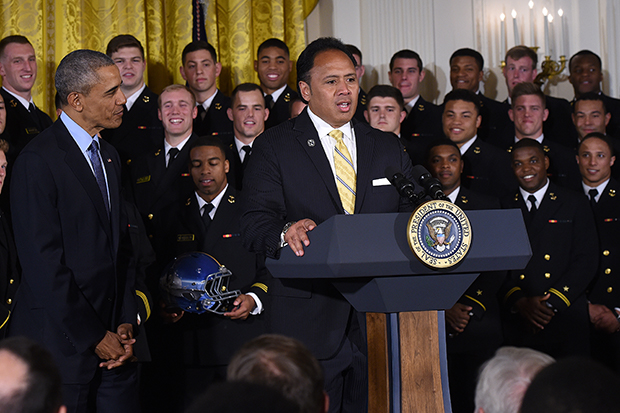