Utah beach volleyball player Olivia Teerlink talks about overcoming trials at a September 27, 2019, devotional at the University of Utah. Photo by Jason Swensen.

“Reaching the top of sports or music or academics is optional—but returning home to Heavenly Father is mandatory.” —McKenna Gassaway

It’s a crazy time for University of Utah sports.

The Ute football team has a pivotal home game Saturday against Washington State. The soccer squad’s on the cusp of Pac-12 Conference play. The season opener for the women’s swim team is days away. And even athletes who are out of season are frantically busy with workouts and film study.

But on Friday, five Latter-day Saint Ute athletes stopped the clock to make time for spiritual things—sharing their testimonies of Christ at a lunchtime devotional at the Institute of Religion at the University of Utah.

Sarah Feeny (cross country and track), McKenna Gassaway (swimming), Zach Hymas (football), Eden Jacobsen (soccer), and Olivia Teerlink (beach volleyball) each spoke of how the gospel offers them perspective, focus, and strength as they meet the physical and mental demands of being student athletes.

An LDS Student Association (LDSSA) council member, Feeny was midway through a successful collegiate running career at Utah when she opted to leave school and serve a mission to North Dakota. It wasn’t an easy choice. She wondered how she would stay fit and if she would be able to compete again with Division 1 runners.

“I am so grateful for the opportunity that I had,” she said. “I learned so much … and the timing was perfect. God’s timing is perfect. I had so many amazing experiences.”

She’s been home about 18 months and has witnessed “so many miracles” in her athletic and personal life.

Last February, she competed in the Pac-12 indoor track championships on the first anniversary of her return from the mission field.

“I knew that God wanted me there for a reason,” she said.

She ended up on the podium, earning All-American honors in the mile with a time of 4:39.35.

The returned missionary harrier invited Friday’s large devotional audience to find their own divine gifts and “bring light into other people’s lives.” 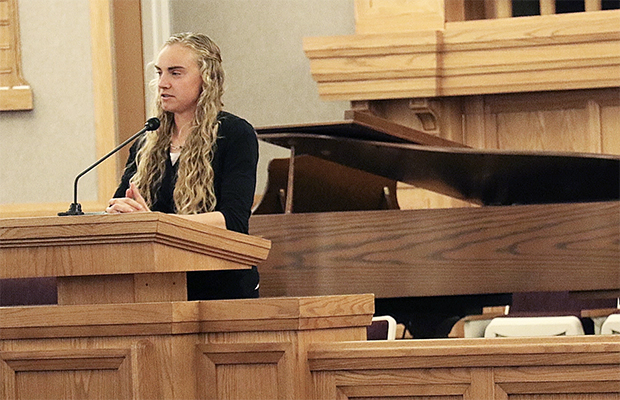 The Bountiful, Utah, native was a late-comer to competitive swimming. She didn’t start lessons until she was 13. But she combined natural talent and seemingly endless hours of practice to develop and, ultimately, become a collegiate swimmer.

For Gassaway, deciding to leave the pool and answer a mission call to Pennsylvania was also tough.

But missionary work “was one of the most rewarding experiences, and I wouldn’t change it for the world.”

Life is demanding and priorities sometimes shift. It’s easy to lose focus on what matters most. “But I think about how much our Savior Jesus Christ has sacrificed for us and how we could sacrifice a bit more for Him. 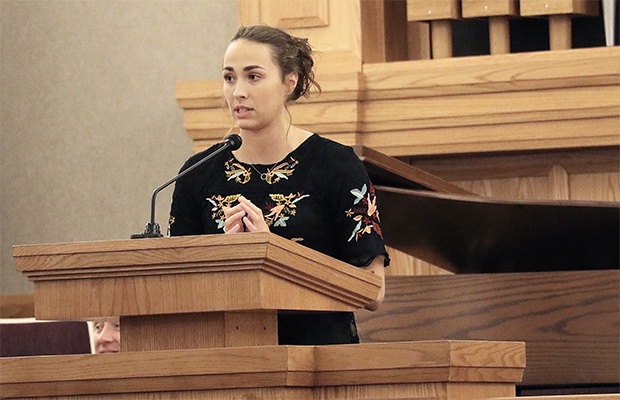 Swimmer and returned missionary McKenna Gassaway speaks at the September 27, 2019, athlete devotional at the Institute of Religion at the University of Utah. Photo by Jason Swensen.

A sophomore quarterback, Hymas spoke of Ammon, his Book of Mormon hero. Ammon was a sinful man who came to himself, changed his ways, and became a powerful missionary who was impervious to Satan’s temptations.

“And all of this,” said Hymas, “because of the Savior.”

Christ is the Redeemer—the divine Agent that offers a comeback for all who fall, said Hymas, a Nevada native who served a mission to Washington.

Football teams can overcome seemingly insurmountable deficits and come back. Athletes can heal from injuries. And so can spiritually-damaged people—through Christ, he said. 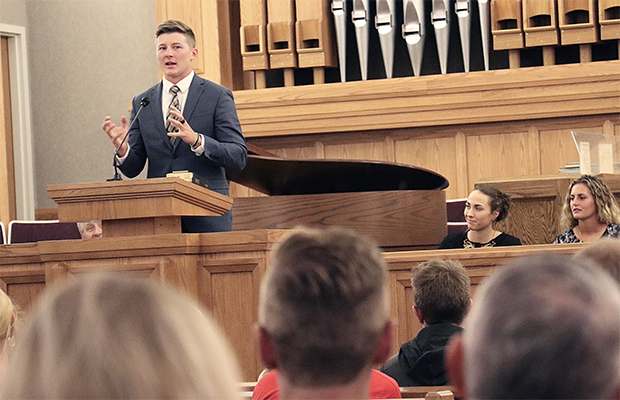 Utah quarterback Zach Hymas speaks at the September 27, 2019, athlete devotional at the Institute of Religion at the University of Utah. Photo by Jason Swensen.

Ute senior midfielder Eden Jacobsen recently returned home from her mission to Florida. She sees several parallels between the lessons of sports and the principles of the gospel.

“On my mission, I had a very special opportunity to see that God truly speaks to us in ways that we understand,” she said.

“In life and in sports, there are trials and obstacles that can keep us from doing our very best,” she said.

The gospel allows people to “overcome challenges, doubts, fears, and sins because we love the Savior and because we know who He is. We have confidence in the Atonement.”

Jacobsen said she has also decided to allow her own missionary experience “to change who I am.”

Each person, she added, can have their own experiences with the Atonement of Jesus Christ. “These are given to us so we can change and become better.” 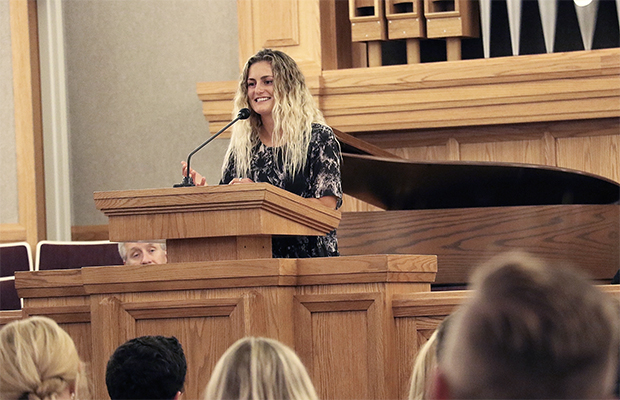 Ute soccer midfielder Eden Jacobsen speaks at the athlete devotional at the University of Utah on September 27, 2019. Photo by Jason Swensen.

Senior beach volleyball player Olivia Teerlink testified that God has a plan for each of His children. There’s no reason to worry about the future if He is in charge.

One of Teerlink’s teammates recently told her she has a difficult time seeing herself as anything but a volleyball player. If she’s not playing well, she falls apart.

“I wanted to shake her and say, ‘You are a child of God. You are so much more than just a volleyball player.’”

The Sacramento, California, native said she grew to love volleyball as a young teen. She had big dreams. But a debilitating back injury made even the simplest tasks painful. Her mother even had to wash her hair. Her volleyball future held little future.

Fortunately, a skilled surgeon was able to repair her back. That experience taught her that trials can be overcome by trusting in the Lord.

She shared a favorite saying: “How foolish we have been to think that we could arrange our own futures more perfectly than the One who arranged the stars in the sky.”

Teerlink said she’s learned to be grateful for the challenges in her life. They have made her a better athlete “and the best version of myself that I could ever be.” 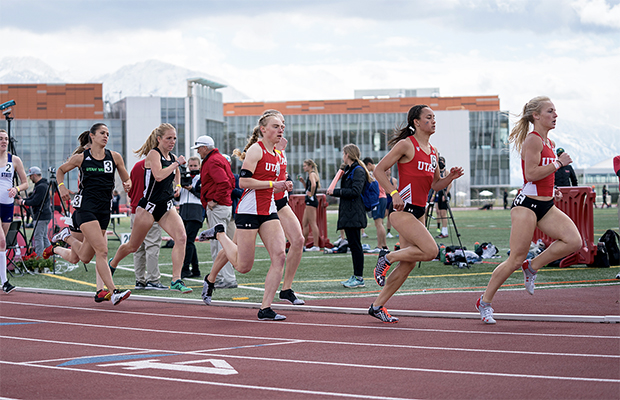 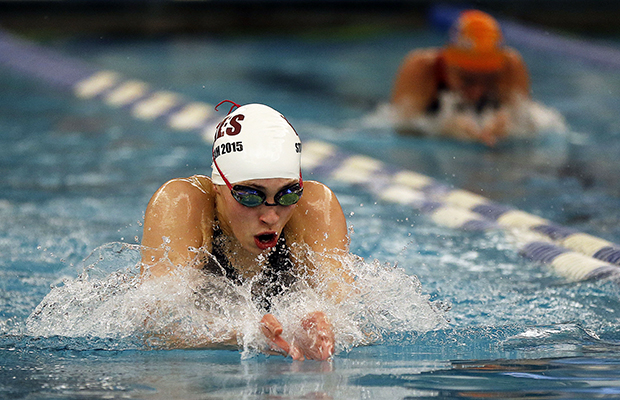 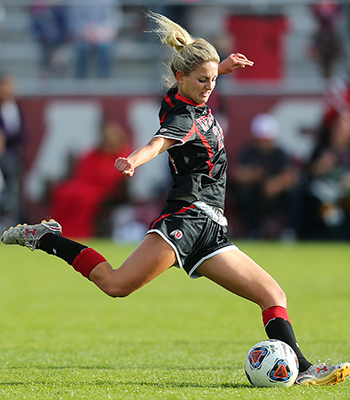