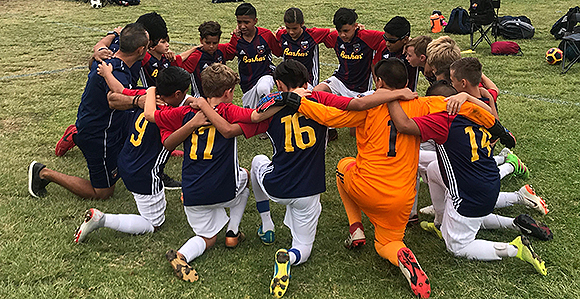 “We educate our coaches that priorities are (1) God and faith, (2) family, (3) schooling, and (4) soccer.” —Travis Breinholt, president of the No Sunday Fútbol Club (NSFC)

After years of watching his sons on high-level soccer teams compete in tournaments on Friday and Saturday and then sit out the championship game on Sunday, Travis Breinholt said he felt strongly that something needed to be done.

The pressure to play youth sports on Sunday was becoming an all-too-familiar story. He knew of many families who honored the Sabbath day that battled with similar circumstances. Some clubs didn’t allow players who sat out Sundays to play on the best teams; instead they had to play on a second team. Again and again, families were forced to compromise quality athletic experiences to maintain their values.

At the time, Breinholt was on the board of directors for the Legacy Soccer Club, now known as Real Salt Lake Arizona. He was one of several people who got together and decided to start looking at a soccer club that didn’t compete on Sunday.

“And it was really the first no-Sunday club program in the country that did not compete on Sunday. So we don’t ever play on Sunday; we don’t ever practice on Sunday. Sunday is our day off,” said Breinholt, a member of The Church of Jesus Christ of Latter-day Saints in Mesa, Arizona.

Breinholt now serves as president of the NSFC. The youth soccer club just kicked off its fourth season and has more than 700 registered players. With roughly 40 competitive teams and a new recreational program starting this fall, the NSFC is striving to change competitive athletic culture by not playing games on Sundays—and it’s benefiting families all over the east valley of Arizona who come from a variety of religions and backgrounds.

“A lot of families have been blessed—not just members of the Church,” Breinholt said. “To see that happen really strengthens my testimony, because it’s something that’s important, something that’s beneficial. We’ve been blessed beyond measure with the way that the club has gone and the relationships and the support that we’ve gotten.”

When the club first started, it was about a religious belief and the Sabbath day, Breinholt said. But now it’s more about providing the best opportunities for player development while respecting family time and values. 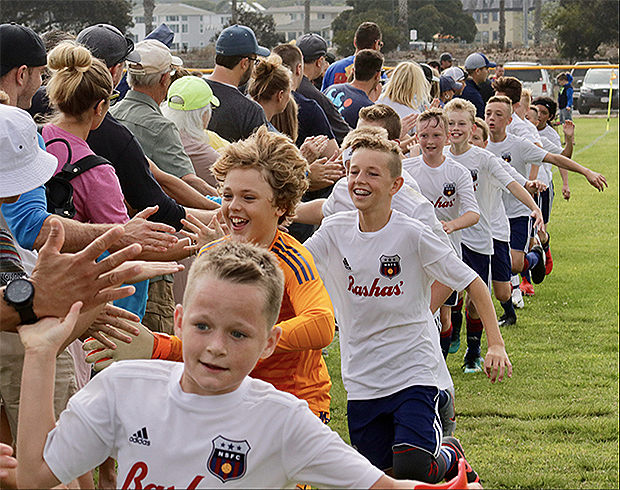 “Fighting for the Family”

For 10 years Greg Gonzalez and his wife helped run a local soccer club in Arizona called Total Fútbol Academy—Barcelona AZ. A Catholic and father of eight children, Gonzalez said running the club is what he felt they were called to do. It was their “ministry” of sharing values and being father figures for kids who needed the positive influence.

Last year, Gonzalez was approached by the NSFC with an opportunity to merge. Joining the NSFC seemed like a great fit for the direction his family and club wanted to go—a continuation of their ministry on a larger scale, he said. And the no-Sunday play meant more time with family.

“This idea and the thought behind it, finding a way for our kids to compete at the highest level and train at that level and be able to honor our Sundays to be with our family . . . was very appealing to us,” Gonzalez said.

Gonzalez is now going on his second season with the NSFC and is a director of coaching. He is optimistic about the growth and development of the club and the impact the NSFC will continue to have in soccer culture.

“It’s exciting for me to see the leadership that we have here and the support, the backing of different cultures, different religions, and yet the same cause,” he said.

About four years ago, Todd Walden was looking for a soccer club in the Mesa area for his sons to join. Walden’s concern—which is a common concern for many Latter-day Saint families in other sports too—was that competitive soccer often means tournaments and championship games are played on Sundays.

Coincidentally, Walden found advertisements for a new soccer club called the “No Sunday Fútbol Club.” Walden knew he needed to get involved.

“It’s not just ‘no Sunday,’ and that’s the reason I wanted to get behind it. . . . Essentially, I wanted to prove that you don’t have to play on Sundays to be good and to be competitive,” Walden said.

Walden, who now coaches two NSFC teams, said he loves being able to watch his sons play a sport they love and still live the standards they believe in. He also appreciates the participation from those not of the Latter-day Saint faith. About 10 of the 17 players on his 2007 Boys Blue team are not members of the Church, and more than half the NSFC coaches aren’t members either, he said.

“Latter-day Saints love it because they can attend church meetings and don’t have to choose on the Sabbath,” he said. “Other people join just because they like the idea of having a free day during the week. There’s other Christian families that . . . believe the same thing too, and they’d like to go to church on Sunday. It’s a ‘fighting for the family’ kind of thing.”

Not only does the NSFC honor Sundays; coaches also try to schedule practice around youth activities on weekday evenings and usually don’t practice on Mondays. 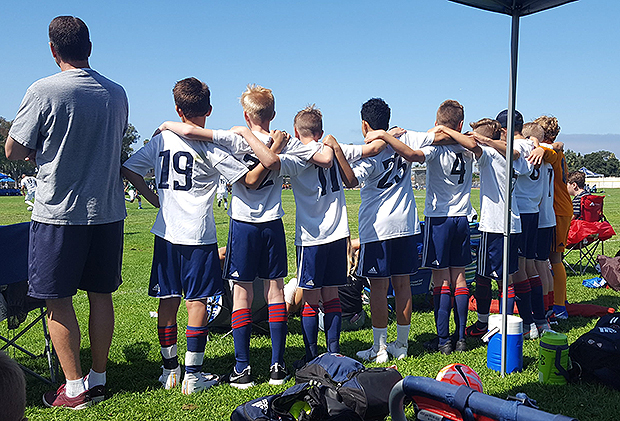 The 2007 Boys Blue soccer team stands with their arms around each other during a tournament in La Jolla in San Diego, California, in September 2019. Photo by Todd Walden.

Bonding on and off the Field

Breinholt said of the more than 60 club-sponsored tournaments in the state of Arizona, over half currently allow the NSFC teams to play and not have a Sunday game. This number has been steadily increasing. The NSFC is also the first club in Arizona to put on a tournament during the week. Games are held Tuesday through Saturday.

“We tell people ‘anytime, anyplace, except Sunday,’” Breinholt said. “NSFC stands for No Sunday Fútbol Club, and it’ll never change. It’s who we are.”

As a result of working with the state over the last year, the final games for 2019 President’s Cup, the state’s year-end tournament, were moved from Sunday to the following Saturday.

“We had 10 teams compete in President’s Cup and ultimately had four teams win the whole thing—which was almost tied for the most for any club in the state,” Breinholt said. “It was a big, big accomplishment for us.”

Though the wins are great, Breinholt said, the biggest focus for the NSFC is helping each and every player reach their potential. And he’s quick to attribute the success of the club to dedicated coaches, families, and players.

Earlier in September, Walden’s 2007 Boys Blue team went to San Diego, California, for the La Jolla Labor Day Classic. The tournament recognized the NSFC’s “no Sunday” play and worked around their schedule.

Tate Walden, 12, plays on his dad’s team and participated in the tournament. The highlight for him happened on Sunday when he and five of the other players went to a nearby Latter-day Saint ward in San Diego. It was fast and testimony meeting, and each of them bore their testimony. “That was pretty cool,” he said.

“It was a great experience for the young men to be together,” Walden said of the fast and testimony meeting in California. “They’ve been able to bond over this.”

When asked why he thinks it’s important to keep the Sabbath day holy and not play soccer on Sunday, Tate said, “So we can partake of the sacrament. It’s one of my favorite things, to pass the sacrament every Sunday.”

Tate said playing soccer has taught him sportsmanship, teamwork, and that “we can do hard things.” His team won the state President’s Cup this past season. Another part he likes about playing soccer with the NSFC is that they kneel and pray before every game.

“Most of our teams, they kneel down and pray,” Breinholt said. “It’s not something that we told them we want them to do. It’s just something that our kids have done. They kneel down in a circle with arms around each other. And one of the players each time takes a turn and just has the prayer for safety and for good sportsmanship.” 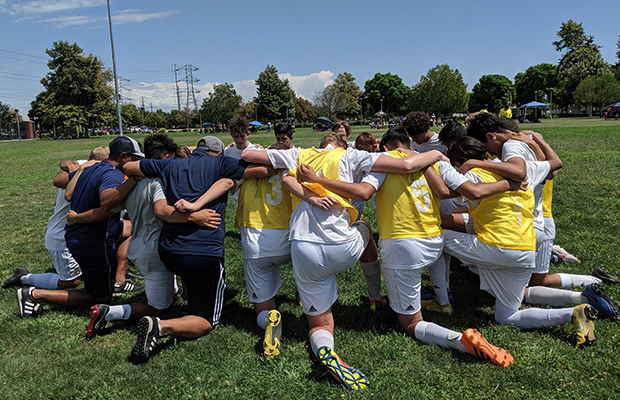 The 2003 Boys Blue team prays before the championship game of the Labor Day Classic tournament in Chino Hills, California, on September 2, 2019. Photo by Travis Breinholt.

“The Future Is Bright”

In June 2019, when teams from the NSFC traveled to the Utah Surf Invitational, Breinholt said he spoke with coaches and parents who were shocked at the success of the NSFC and no Sunday play. He often receives calls from volleyball, basketball, and even baseball organizations who are interested in creating a similar athletic culture.

“I’ve told every one of them, ‘Look, there’s no secret. It’s just, you have to stick by what you believe and stick for that, no matter what the consequences are.’ And ultimately, if you believe in what you’re doing, it’s going to work out in the best way for your kids and your organization,” he said.

And it hasn’t been easy, he added. The organization has faced roadblocks and criticism, and they’ve had learning experiences along the way. But everything has worked out for what’s best for the club and the kids.

Gonzalez said the NSFC chooses their battles wisely with the state and regional play.

“With some great leadership, we’re starting to nail down some of those obstacles and find ways to compromise to allow us to compete and get to the higher levels of play,” Gonzalez said. “So we’ll see. The future is bright for us. Little by little, we’ll get there.”

The goal isn’t to force everyone to not play on Sunday, Breinholt said. Instead, the NSFC wants those who feel strongly about no Sunday play to be able to have the same opportunities to compete at the highest level. And the organization is respectful of other clubs that don’t feel the same way.

“We don’t want . . . playing on Sunday to be a stumbling block or essentially just flat-out a roadblock, which was what it has been,” Breinholt said.

Walden, who serves in the bishopric in his ward, said he is interested to learn more about the new Children and Youth program and how the players might be able to apply their experiences with the NSFC. “Maybe this could potentially fit right in with what the new program might encourage them to do—finding things that they can do and goals they can reach but also living up to the standards they have,” he said. 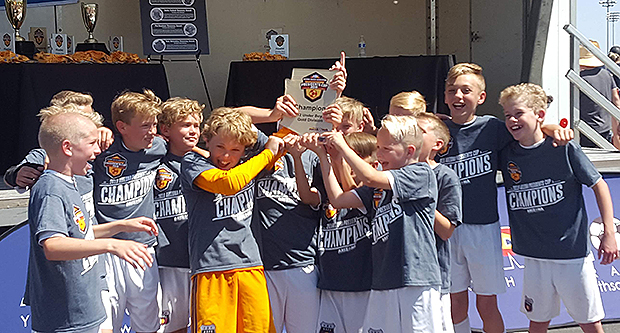 The 2007 Boys Blue soccer team holds up the trophy after winning the Arizona President’s Cup Tournament in April 2019 in Phoenix. Photo by Todd Walden. 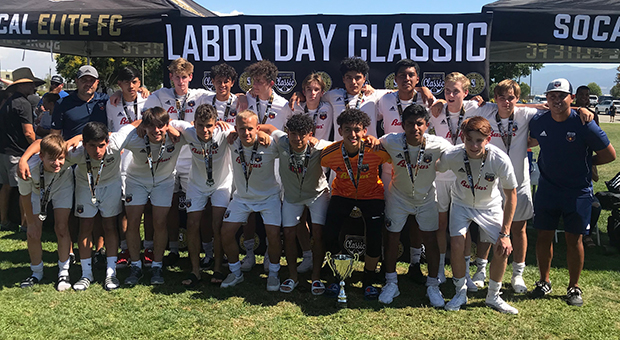 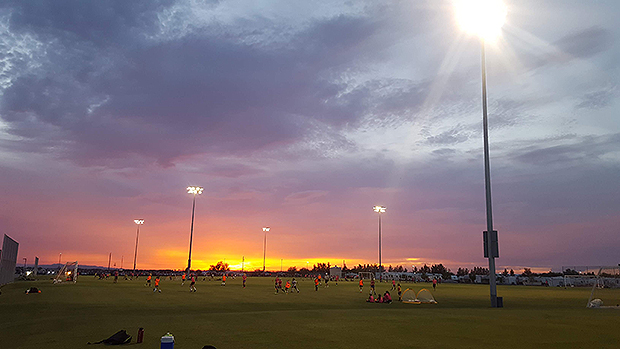 The sun sets on the NSFC fields in Mesa, Arizona. Photo by Todd Walden.