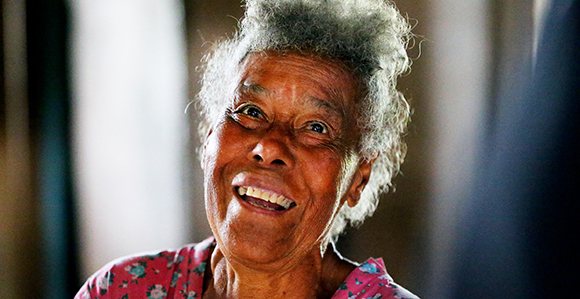 “Before coming, I thought I was going to give support and love to Puerto Rico. We thought it was us who would give a great gift. But to the contrary, in every home, in every meeting, and with every handshake, we’re the ones who have been blessed.” —Bishop Dean M. Davies of the Presiding Bishopric

In the rain forest hills of north-central Puerto Rico, 75-year-old Audora Agosto shuffles into what she calls her kitchen, a small, open-air area covered by a sheet of corrugated tin spanning from an exposed wall to an outcropping of rocks and dirt. She cooks above a fire nestled atop whatever burnable wood she can find.

There’s no power, no water—and practically no home, just a couple of still-standing interior walls of the wood-and-block structure decimated in last September’s one-two punch of Hurricanes Irma and Maria that pummeled the U.S. territory island.

Audora has moved in with extended family in a couple of dwellings a stone’s throw down the hill. Houselights there are jerry-rigged to a car battery just inside a doorway. Water is hand-drawn and packed in from one of a number of PVC pipes jutting out from hillsides in the area; far from pure, the water sources become even more contaminated by locals washing clothes or bathing around the tubes.

Meanwhile, in the Sector Camino Nuevo coastline near Yabucoa, several damaged homes are perched precariously on a small cliff overlooking golden sands caressed by rolling Caribbean waves. Viviana Morales and friends visit the ruins of her late father’s home, he having died a month before the hurricanes.

She had come to check on the vacant home the evening Maria hit, only to be nearly swept away with others by the waist-deep floodwaters and sea surge. Returning later in daylight, she found the back half of the home missing, along with much of the rocky high ground on which the home had stood.

With a population of 3.4 million and an LDS membership count of more than 23,000 on an island about the size of the state of Connecticut, every person in Puerto Rico shares hurricane stories from last fall and experiences about recovery in the five months since.

Those experiences are like threads, crisscrossing and interwoven in a fabric of relief and recovery regardless of one’s race or religion, just as the Church, its members, and LDS Charities help member and nonmember alike. These threads bind together and strengthen Puerto Ricans—paraphrasing a hymn—to touch each other for good. 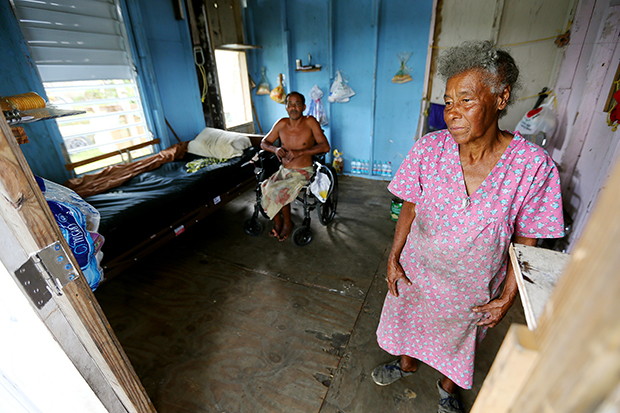 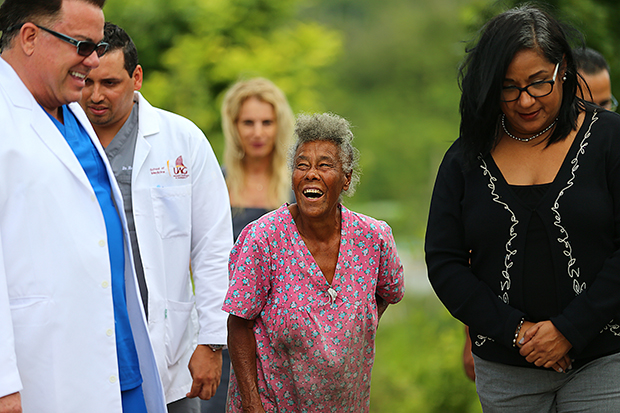 On September 6, Hurricane Irma and its 185-mph winds passed north of Puerto Rico en route to pummel Florida. Despite the near-miss, the category 5 storm left 1 million on the island without power and damages estimated at $1 billion. Fourteen days later came the direct-hit knockout and the island’s worst hurricane in eight decades. The category 4 Maria with 155-mph winds cut a destructive, diagonal path like a 50-mile-wide tornado. The total death toll topped 1,000 by some estimates.

Nearly a half-year later, the island again looks lush. But Puerto Rico’s looks can be deceiving.

Schools reopened in late December after two-plus months, with buildings damaged and severe limitations on drinking water, hot meals, and bus transportation resulting in half-day schedules. With the school year now only extended by an extra week in June, many are concerned about the impact of lost learning for the island’s children. And the 2018 hurricane season is just four months away.

Puerto Rico’s most pressing recovery needs hinge on infrastructure and large-scale matters directed by the government. Yet the Church, its members, and LDS Charities are finding ways to make a difference, one person, one household—one thread—at a time.

Audora and her family, who are not members of the LDS Church, are visited by doctors from a Vega Baja clinic, who have driven 20 kilometers up winding roads in a van provided in partnership by LDS Charities and Real Medicine Foundation. Medical personnel give extra attention to Audora’s adult grandson, José Manuel Adorno, a wheelchair-bound paraplegic who accesses his shack on ramps crafted from post-hurricane scrap lumber. 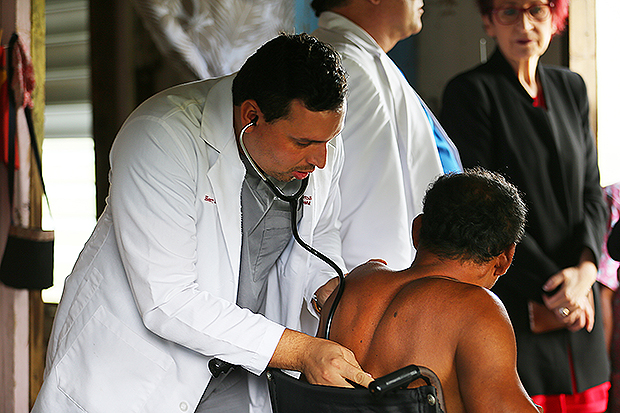 Along the Camino Nuevo coastline, LDS Bishop Miguel Rodriguez of the Humacoa Ward is joined by his wife, Rosa, and two full-time sister missionaries, Sister Mary Ruff and Sister Erin Bianucci, who were among the first 30 Mormon missionaries to return to the Puerto Rico San Juan Mission after a post-Maria evacuation and temporary reassignment stateside. Together the four visit Viviana and other neighbors in the damaged homes, inquiring about well-being and needs while distributing cleaning kits, food, and other assistance items as well as an occasional Book of Mormon.

With fallen interstate supports isolating his neighborhood, President Roman Juan Torres of the Toa Baja Puerto Rico Stake was unable to leave home or check on stake leaders and members for three weeks after Maria. Instead, he and his family turned their attention to neighbors they could help—and he cited a series of “miracles” realized in the effort.

He remembered having 1,700 gallons of emergency water stored in drums on his property that he could share with others. His family realized a gas tank used to fill a generator the day before Maria was inexplicably full the next day in order to service another’s generator. And they found and helped a man who had lost a leg who was trying to survive with no food and drinking only water that he could gather from his roof.

“It helped us realize that despite all the difficulties that we were having, the hand of the Lord was among us,” he said. 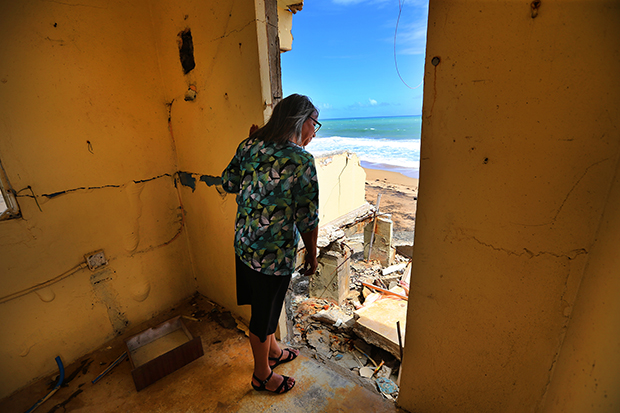 Rosa Rodriquez looks out of what used to be a home on the coast near Yabucoa as hurricane recovery efforts continue. Photo by Scott G Winterton, Deseret News.

After caravanning evacuated missionaries to San Juan’s airport to fly to Miami for mission reassignment or release, mission vehicles were repurposed by local welfare leaders to shuttle relief materials shipped by the Church when delivery trucks couldn’t be arranged. Even gas from some mission vehicles was siphoned to sustain thirsty generators.

During a recent three-day February assignment to Puerto Rico, Bishop Dean M. Davies, First Counselor in the Presiding Bishopric, saluted the efforts of Puerto Rican Saints in their relief efforts.

“You can’t get on a bus and load up members from a neighboring stake and do Helping Hands. It’s not possible. They’re on an island; they’re isolated,” he said. “There’s been a lot of work that they’ve done on their own to care and reach out for each other.” 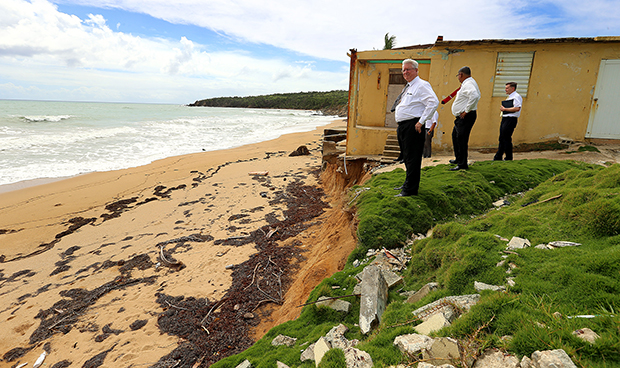 In addition to the one-by-one service provided by members, the Church amplifies its assistance by having LDS Charities partner in relief and recovery with nongovernmental organizations. LDS Charities has been working with six relief partners in Puerto Rico since the hurricanes and is looking to join a seventh soon in a water project on the island.

To date, the Church has provided more than $4 million in in-kind and cash donations to these NGOs in the Caribbean Area after Hurricanes Irma and Maria, much of it to Puerto Rico because of its greater population. Some 100,000 households on the island have been assisted, more than four times the local Church membership.

Bishop Davies and Ty Johnson, LDS Charities director of emergency response, checked in with some of the Church’s relief partners—Real Medicine Foundation, Save the Children, and Banco de Alimentos de Puerto Rico (Food Bank of Puerto Rico)—to see how donations are being used and what opportunities for ongoing assistance remain. While there, LDS Charities presented a $100,000 donation to the food bank. 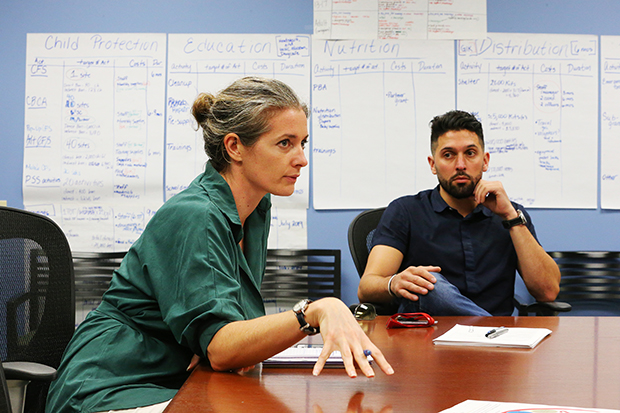 Casey Harrity, team leader for Hurricane Maria response at Save the Children US, and deputy team leader and operations manager Nathan Mathew explain what their organization is doing to help as hurricane recovery efforts in Puerto Rico continue. Photo by Scott G Winterton, Deseret News.

But more than helping oversee the large-scale nature of the Presiding Bishopric’s temporal assistance, Bishop Davies also ministered to the Latter-day Saints and those in need.

“It’s more than they’re just in our prayers and our thoughts but that we actually came out to be with them, to share burdens,” he said.

He described the visits as taking “the Light of Christ and the caring of Christ in a personal way—and I think that’s what the Savior would do. He would lift one by one. That’s why I’m here. … The ministry of a bishop is to reach out in the name of the Savior, to lift the hearts and the hands of those who may be in difficult situations.”

Bishop Davies was accompanied by his wife, Sister Darla Davies; they lived in San Juan with two daughters from 1998 to 2001 as they presided over the San Juan Mission, and it was her first return since. Joining them were Elder Jose L. Alonso, a General Authority Seventy and Second Counselor in the Caribbean Area Presidency, as well as other local and area priesthood and welfare leaders and their wives.

All together, they visited members in San Juan, Bayamon, Toa Baja, Yabucoa, and Arecibo, with many of the homes still showing extensive damage, to offer encouragement while listening to expressions of faith, protections, and gratitude. 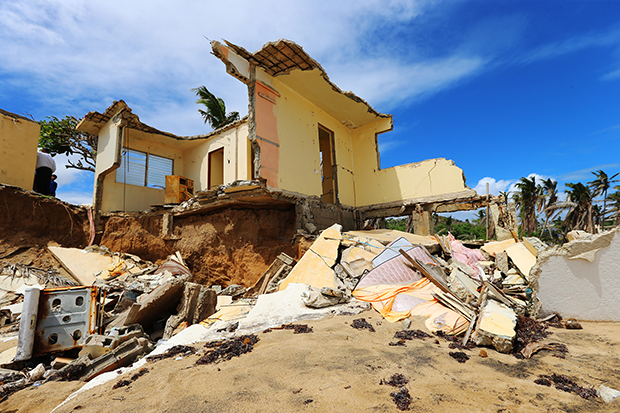 A destroyed home sits high above what is now a small beach in Sector Camino Nuevo near Yabucoa as hurricane recovery efforts in Puerto Rico continue on Saturday, February 17, 2018. Photo by Scott G Winterton, Deseret News.

In one stop, Bishop Davies reached out to a recent widow—the daughter of a man he had worked closely with as a mission president and single mother who was almost blown off her home while trying to make mid-hurricane repairs to the roof. In another, he assisted in a series of priesthood blessings for the family of a ward bishop who had suffered severe burns after the hurricanes. And for one afternoon, the wives broke away as a separate group to make their own ministering visits.

Local members and leaders recounted promptings before, during, and after the hurricanes that directed them to safety and to secure valuable family records. “Clearly the Lord helped protect and preserve many of these Saints—and that’s a sacred experience,” Bishop Davies said.

After three days of witnessing Saints not just simply surviving but reaching out to serve others, Bishop Davies said his assignment to Puerto Rico was not what he anticipated.

“Before coming, I thought I was going to give support and love to Puerto Rico. We thought it was us who would give a great gift,” he said. “But to the contrary, in every home, in every meeting, and with every handshake, we’re the ones who have been blessed.”

As a ministering visit in a Yabucoa neighborhood concludes, Elder Alonso pauses to reflect on how the Puerto Rican Saints have fared in the past five months—weathering Irma and Maria’s aftermath while reaching out to help sustain their neighbors.

He points to a small Puerto Rican flag—featuring five alternating red and white stripes, with a single white star positioned inside a blue triangle—blowing in the breeze from atop a neighboring house. 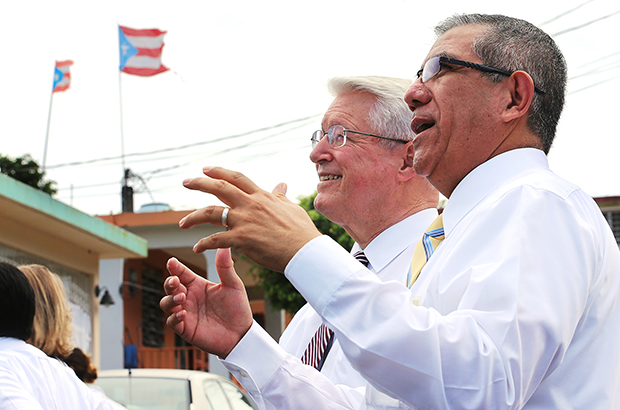 Elder Alonso says that while the flag he has singled out is weather-worn, faded, and frayed, it still stands for something and causes people to act certain ways and to feel certain emotions. The threads of the flag hang together.

“And look at it in the wind,“ he says. ”It takes some wind to make a flag look its best.” 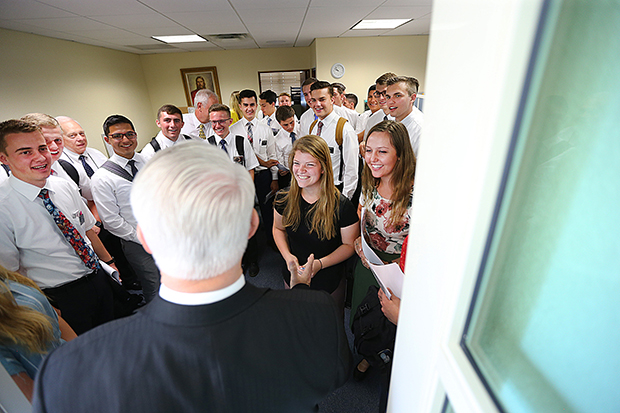 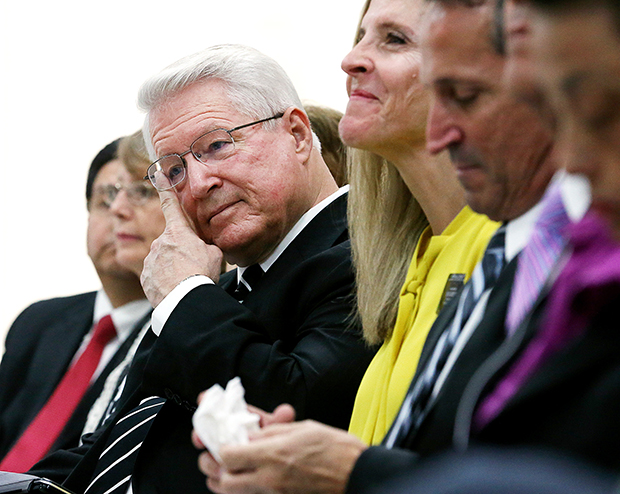 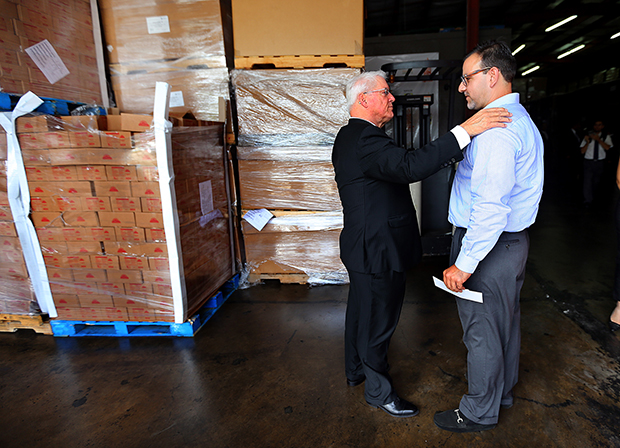 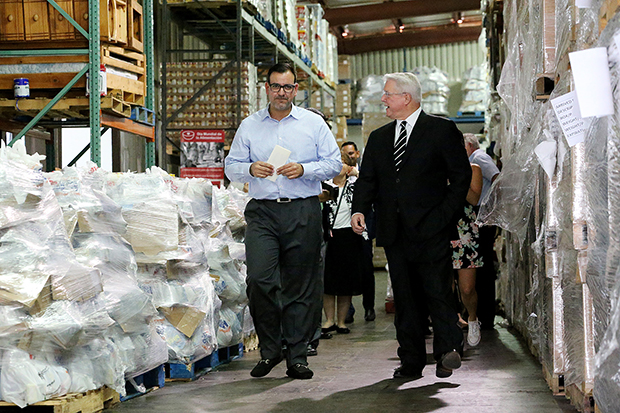 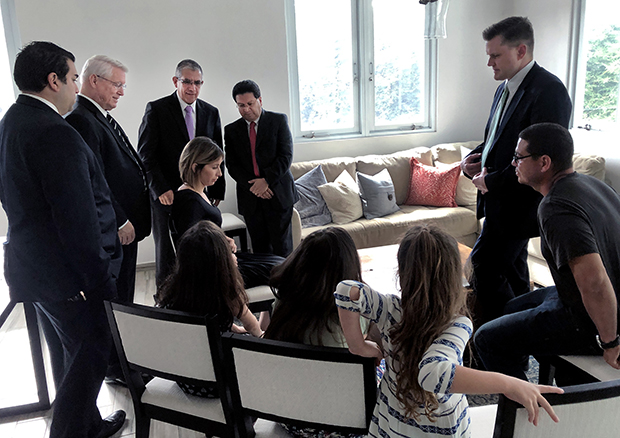 Bishop Dean M. Davies and Elder Jose L. Alonso and others prepare to administer to Sister Ivanisse Busher with her family around as they meet with residents and local aid workers in Puerto Rico. Photo by Scott G Winterton, Deseret News. 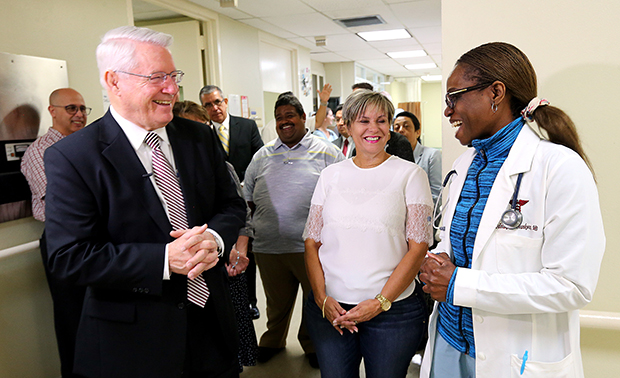 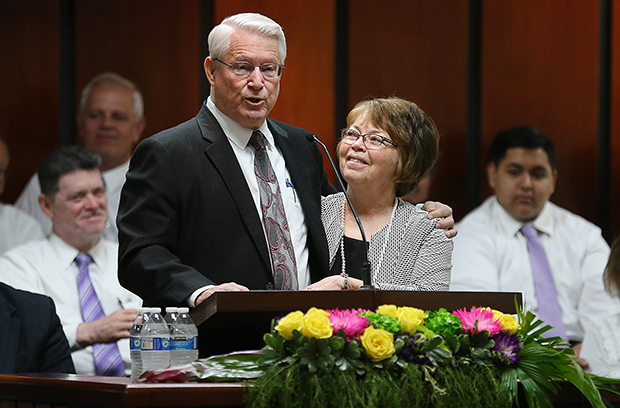 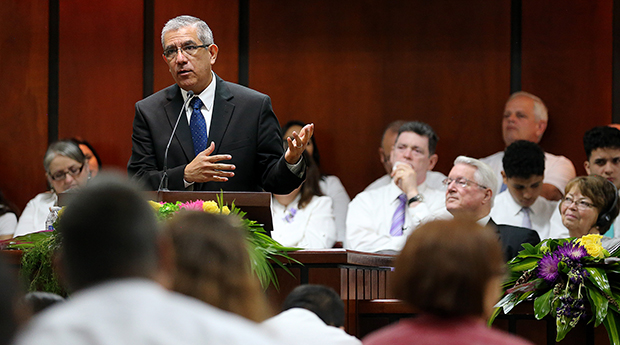