Anna Hughes, second from right, visits with friends at a Knoxville-area mosque. Hughes and other young women from her ward gathered scarves in a makeshift “hijab drive” for their Muslim friends at the mosque.

“I wanted to let these young women know they are never alone and that I respect their values and who they are.” —Anna Hughes, service project organizer

Anna Hughes knows the sting of religious discrimination and bigotry.

The 16-year-old Knoxville, Tennessee, resident lives in an area where she and her fellow Latter-day Saints are religious minorities. Occasionally, she’s been stereotyped and misunderstood because of her gospel beliefs.

So Anna felt an immediate kinship with a group of other Knoxville-area young women who, at first glance, might appear on opposite ends of the religious spectrum.

Last year, Anna and several other young women from the Grove Park Ward, Knoxville Tennessee Cumberland Stake, were visiting the Annoor Mosque to learn more about other religious congregations in their community.

After touring the mosque, the Latter-day Saint girls were invited to ask questions of their Muslim counterparts. No surprise, they wanted to know about their hijabs—the traditional veils or scarves worn by Muslim women.

Their hosts were eager to answer, explaining that they wore hijabs whenever they interacted with people who were not of their immediate family.

The hijab, they added, is a symbol of modesty and chastity anchored to their Islamic beliefs and tenets.

“But the hijab has also made them a target because they stand out,” said Anna. “We spoke to 12- and 13-year-old girls who had been told horrible things simply because they choose to wear their hijabs.”

The high school junior recognized and admired the Knoxville Muslim girls’ integrity and commitment to their beliefs. “I wanted to do something to show them that I appreciated them even when others might mock them,” she said.

Anna decided to enlist the Relief Society sisters and young women from her ward in a “hijab drive” to gather scarves that would be harmonious with Islamic standards of modesty.

The Grove Park Ward responded enthusiastically. “I had multiple women give me multiple scarves to donate,” she said.

On February 3, in observance of World Interfaith Harmony Week, Anna and a fellow Laurel, Emma Strickland, delivered the collected scarves to the Pearls of Knoxville, the local Muslim young women’s group, during one of their Sunday gatherings at the mosque.

Each scarf was pressed, folded, and wrapped with a bow and a favorite quote. They were a welcome gift. One young Muslim woman had forgotten her hijab and immediately used one of the new scarves.

The project was simple. It didn’t cost tens of thousands of dollars. It didn’t require months of planning. But friendships between two religious groups were solidified at a moment in time often defined by division and distrust.

“I wanted to let these young women know they are never alone and that I respect their values and who they are,” said Anna.

Amira Hamed, the leader of the Pearls of Knoxville, said the recent gift “was really beautiful. It’s touching a lot of the Muslim community’s hearts.”

Now the Muslim girls are planning to share some sort of gift in the near future with their Latter-day Saint friends.

Harrison Hughes is serving a mission in Brazil. 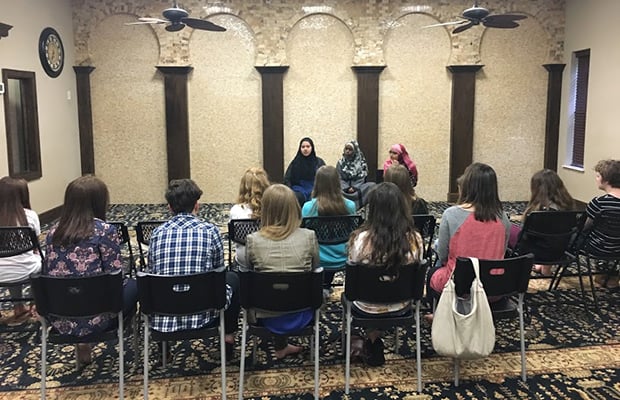 Young women from the Grove Park Ward ask questions of their young Muslim hosts during a visit to a Knoxville, Tennessee, mosque in April 2018. Photo courtesy of Jennifer Hughes.