Mormons, Muslims, and Methodists Serve Together as One Community 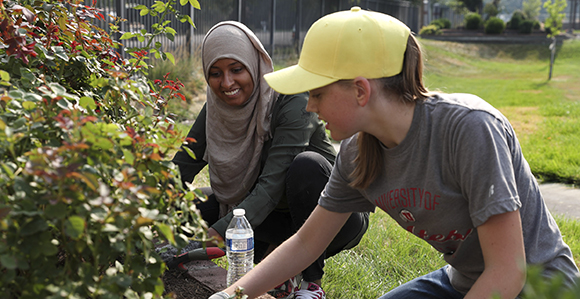 Halima Noor, a volunteer for the Islamic Society of Greater Salt Lake, plants flowers with Belle Kocherhans, 16, on the grounds of the society’s Mosque. Members of the West Jordan Utah Park Stake teamed up with community members for an all-day service project in West Valley City on August 4, 2018.

“God understands that we have more similarities between us than differences.” –Muhamed Shoayb Mehtar, Imam at the Khadeeja Islamic Center

Sitting under the colorful domed ceiling in the center of the Khadeeja Islamic Center were some 200 youth and their leaders wearing bright yellow hats.

For many of the youth, it was their first time in a Muslim mosque and they sat with raptured attention, facing the mosque’s imam, Muhamed Shoayb Mehtar, as he spoke about the particular similarities between the Islamic and Latter-day Saint faiths.

“God understands that we have more similarities between us than differences,” Imam Mehtar said.

On Saturday, August 4, the group crowding inside the room consisted mostly of members of the West Jordan Utah Park Stake and members of the Islamic Center congregation. They volunteered their Saturday to perform acts of service throughout the West Valley neighborhood where the mosque is located and, together, they represented a united effort to improve interfaith dialogue and build lasting relations among the diverse communities in the Salt Lake Valley.

The words “As-Salaam-Alaikum”—Arabic for “peace be unto you”—were exchanged repeatedly as leaders from both churches spoke to the crowd about the importance of overcoming fears and misunderstandings about religions and cultures that are unfamiliar.

Imam Mehtar explained that the greatest societies in history were not those built in pursuit of education and wealth, but rather those “that helped create an environment of safety, security, and goodness and well-being towards others.” He continued, “That is what has made you successful here today.”

The service projects on Saturday ranged from landscaping the mosque’s grounds to helping clean and update the interior and exterior building of the nearby Tongan United Methodist Church, and on to building a wheelchair accessible entrance ramp for a local teen who was recently paralyzed. The leaders of the West Jordan Utah Park Stake said they hoped the efforts would teach the youth of the stake that serving others can bring peace into their lives. The project, which was implemented as part of the stake’s youth conference, was built on the Church’s 2018 youth theme “Peace in Christ.”

Service for a day, purpose for the future

West Jordan Park stake President Jeffrey Rowland explained that service can help bring peace into individual’s lives. He said his hope was for the youth to have the opportunity to work and serve others locally as well as serve in areas where the needs might be greater than in their own stake community.

Although the day of service was initially conceptualized as a large-scale community service project, its actual rendering became a testament to the power of brotherhood, kindness, and Christlike love as it brought together the efforts of three separate faith communities joined in a mutual effort to beautify and bring peace to the local community.

In addition to the three churches involved on Saturday, businesses such as the local Home Depot and Millcreek Gardens donated supplies to help with the various projects the stake carried out throughout the neighborhood.

President Rowland said that after seeing various secular and faith populations uniting in unexpected ways to serve this community, “it was neat to consider that we ended up going beyond just local ward members and were able to do something helpful for those not of our faith as well.”

Pastor David Ofahengaue of the Tongan United Methodist Church said it was a surprise connection with a city council member that helped the West Jordan stake become aware of his church’s needs for renovation and cleaning. He added that he feels a deep connection with the Latter-day Saint population based on the longstanding presence of the Church in the Pacific Islands.

“Mormons and Pacific Islanders have similar lifestyles because they are both so family oriented,” Pastor Ofahengaue said. He noted that the cultural similarities between the Utah and Pacific Islander populations have allowed him to feel welcome and at home since moving to Utah five years ago.

Describing how Tongan families refer to one another, Pastor Ofahengaue said that there is no such thing as cousins. Everyone who is a relative is ‘Tokoua,’ which means brother or sister.

“So we call each other the same as you do,” Pastor Ofahengaue said, indicating another similarity between Pacific Islanders and Latter-day Saints.

Admitting there is a lot more work needed by his church than can be accomplished in a single day or by a single volunteering stake, Pastor Ofahengaue said the West Jordan Park Stake’s efforts are reflective of the positive relationship the churches have with one another. He said their efforts exemplify the type of bridge building that communities need in order to rally around one another and be lifted up together.

Similarly, Imam Mehtar expressed his gratitude for the service provided to the Muslim mosque and the brotherhood and friendship fostered by the continual efforts of the Church to reach out and serve the Muslim communities.

“I think the Utahns and LDS populations have been very supportive and idea sharing over generations,” Imam Mehtar said. “And that if we use this given model that we are seeing here in Utah on a global level, we could create phenomenal changes.”

He described his gratitude for the Utah community which he feels has been very welcoming and has made an effort to learn about who Muslims are and what Islam is all about.

Service throughout the neighborhood

Throughout the day, heads donning yellow hats could be seen bobbing up and down the streets in the West Valley neighborhood encompassing the Jordan View Ward boundaries. In addition to the large-scale projects at the church and mosque, small service projects were carried out at various homes of community members who had requested assistance through the local ward.

Bishop Mark Sears of the Jordan View Ward, along with his ward council, spent several weeks working with the West Jordan Park Stake leaders to generate a list of community members who could benefit from the stake’s day of service.

As President Rowland explained it, the way they set up the service projects made it about more than the service itself.

“If we were going to go down the service path for youth conference, we wanted as much as possible for there to be a personal connection,” he said. “We wanted our youth to actually meet these people, to communicate, and to pause from their labors to hear some stories about their lives because we wanted it to touch their hearts. It’s one thing to trim a weed or paint a post, but it’s another to have a conversation with a person.”

A personal approach to service

Standing in his kitchen as volunteers in yellow hats bustled around him and his furniture, Oscar Galicia expressed his gratitude for the work the West Jordan stake was providing for his family. He explained that as a single father trying to balance going back to school for an engineering degree and taking care of his children, house and yard work have necessarily taken a seat on the backburner.

He said seeing people all over his home, painting, cleaning, trimming bushes and more, has helped strengthen his sense of belonging in his community.

“There’s new faces all around, and it’s beautiful,” Galicia said of the volunteers all around him. “They are coming to my house and they don’t know me, but by looking at their eyes I know that we have known each other for a long time.”

Although Galicia was born and raised in Mexico, he said that Salt Lake City feels like his home now, and that the gospel is a huge part of that for him. “I feel so blessed to live here where the LDS community is so much bigger than other places,” Galicia said.

Cindy Hanks, another community member who felt particularly blessed by the service of the West Jordan stake, described the members in yellow hats as an answer to her prayers.

“I’m just so blessed to have them here,” Hanks said. “It’s been really hard to see my grandson like that, but our prayers are just answered every day.”

Hanks’ grandson, Jonathan, who lives with her, was recently in an accident which left him paralyzed. Without resources to build the necessary accommodations for the changes required by her grandson’s condition when he returns home from physical rehabilitation in the next month or so, Hanks expressed her gratitude for the time and resources the stake provided in building a wheelchair accessible ramp for her home. The stake has additionally helped her and her family with filing the necessary paperwork and plans to renovate the bathroom and other parts of the home that need adjustment for her grandson’s condition.

Jonathan’s friend and the local scoutmaster, Kyle Tishner, who was onsite helping to build the wheelchair ramp in preparation for Jonathan’s homecoming, described how he felt lucky to be able to help someone so close to him. “It’s cool to help someone out, it just makes you feel good. But it’s one thing to help someone out that you don’t know, but it’s another when it’s practically your brother,” Tishner said.

Although the stake planned to get as much done as they could on Saturday, Josh Parry, the stake Young Men’s president, said they already have groups planning to return in the spring to continue the service and the relationships they have developed.

“I think that is really a piece of ministering,” Parry said. “You know it’s not just this one-time thing, but people made a connection and are excited to come back and continue serving.”

Describing their gratitude for the service and the relationships built throughout the day, the leaders of both the mosque and the Tongan Methodist church said they hoped to continue to partner with The Church of Jesus Christ of Latter-day Saints as much as possible.

It’s only when partnering together for positive change that religion can serve a true humanitarian purpose, said Abdul Afridi, trustee for the Islamic Society of Greater Salt Lake. It needs to be a combined effort, he explained.

“Our goal is not only the Chesterfield area,” Afridi said. “Our goal is to the next and next neighborhood, then the next state, then all over the world.” 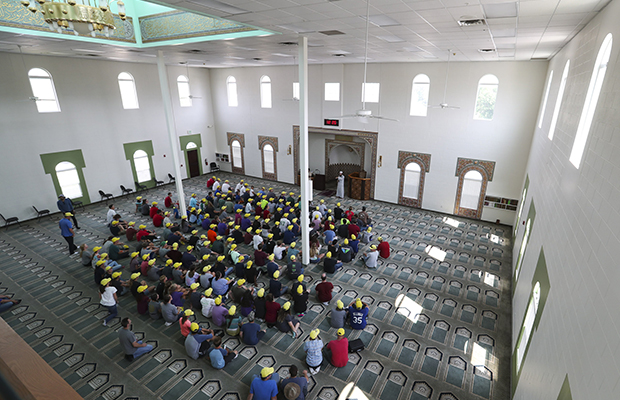 Imaam Muhammed Shoayb talks with members of the West Jordan Utah Park Stake in the prayer hall of the Islamic Society of Greater Salt Lake Mosque following a lunch break during an all-day service project in the Chesterfield area. Photo by Steve Griffin, Deseret News.

Members of the West Jordan Utah Park Stake and members of the Islamic Society of Greater Salt Lake work together outside the Mosque. Photo by Steve Griffin, Deseret News. 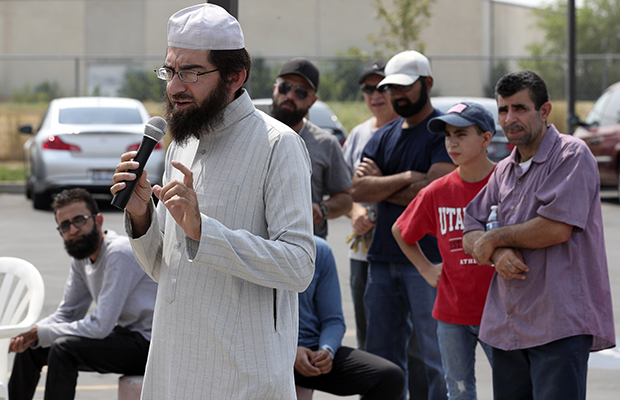 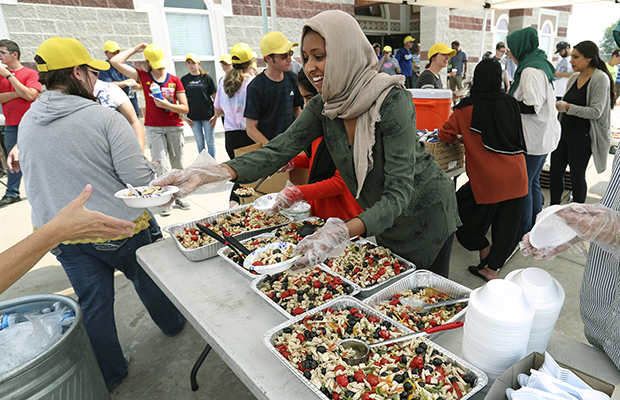 Halima Noor, a volunteer for the Islamic Society of Greater Salt Lake, serves lunch to members of the West Jordan Utah Park Stake outside the Mosque. Photo by Steve Griffin, Deseret News. 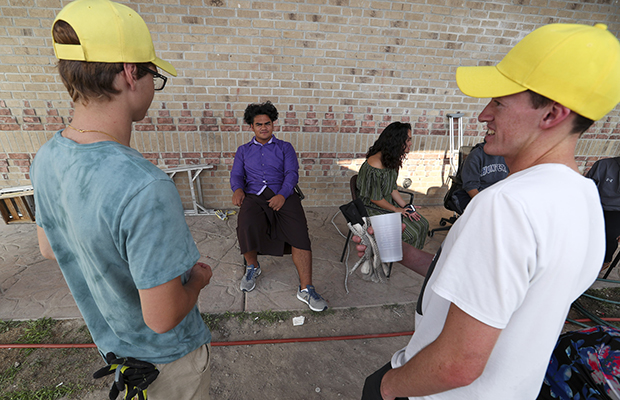 Aiden Potter, left, and Logan Anderson talk with Nelu Muavao, center, as members of the West Jordan Utah Park Stake work during an all-day service project in the Chesterfield area. Muavao is a member of the Santa Ana United Methodist Church in California and was visiting the Tongan United Methodist church where the volunteers were working. Photo by Steve Griffin, Deseret News. 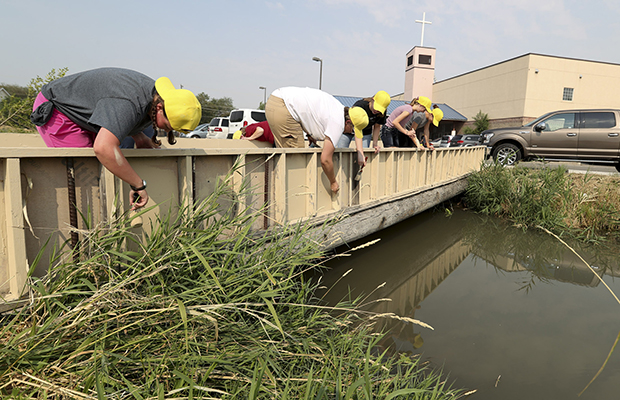 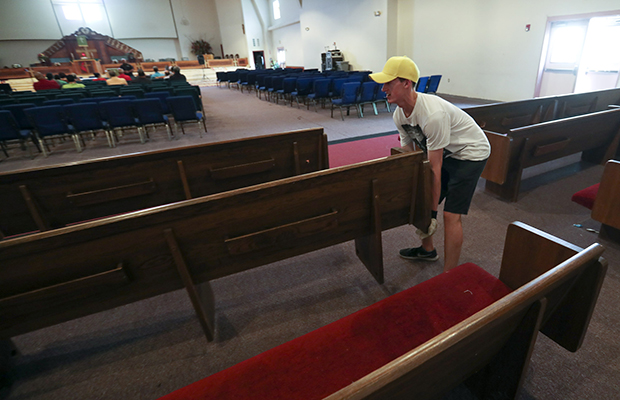 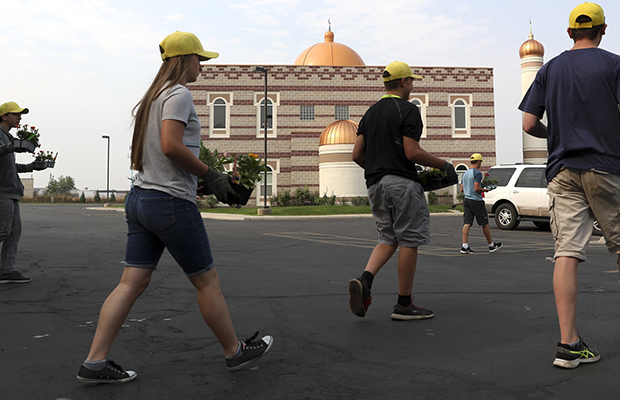 Members of the West Jordan Utah Park Stake carry flowers on the grounds of the Islamic Society of Greater Salt Lake Mosque during an all-day service project in the Chesterfield area. More than 200 volunteers worked at private homes and several churches nearby the LDS meetinghouse near 2100 S. and Redwood Road in West Valley City on Saturday, August 4, 2018. Photo by Steve Griffin, Deseret News.