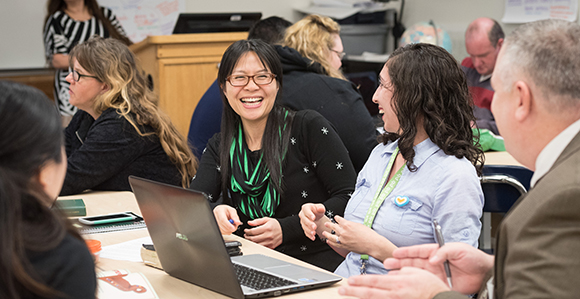 BYU–Pathway students meet together on a Thursday night.

“Education for members of the Church is inextricably connected to our faith. … This is part of who we are as a people.” —Clark G. Gilbert, BYU–Pathway Worldwide president

Just a few blocks west of Church headquarters, nestled between LDS Business College and the BYU Salt Lake Center, is the new headquarters for BYU–Pathway Worldwide.

A peek into the offices, located on the fifth floor of one of the buildings in the Triad complex, may give the impression that it is a small setup of less than 100 employees, just getting started.

But a look at the numbers tells a different story.

In 2018, BYU–Pathway Worldwide will serve more than 40,000 students with only 100 employees, said BYU–Pathway Worldwide President Clark G. Gilbert. “That doesn’t make any sense until you realize it [includes] about 2,500 missionaries, 1,600 instructors at BYU–Idaho, 300 [self-reliance services] managers around the world, and 500 institutes.”

The BYU–Pathway Worldwide organization, announced in February of 2017, serves more than 40,000 students living in countries around the world—that’s more than the student body on the campus of any one of the Church’s other schools.

Although the setup in downtown Salt Lake City may seem modest, what’s happening inside those walls—as well as in homes and institute buildings around the world—is far from a simple task.

As laid out in the mission statement printed on a wall in the lobby of the new headquarters, BYU–Pathway Worldwide is helping “to develop disciples of Jesus Christ who are leaders in their homes, the Church, and their communities.”

“Looking to have another chance”

Although the creation of BYU–Pathway Worldwide was originally announced on February 7, 2017, a part of the Pathway program has been around since 2009.

Beginning as a small pilot program designed to provide college educational opportunities to those who otherwise would not have them, the Pathway program, established at Brigham Young University–Idaho, has grown into a large student body in just under a decade.

“Education for members of the Church is inextricably connected to our faith,” said President Gilbert. “This is part of who we are as a people.”

On the surface, the creation of BYU–Pathway Worldwide may seem like a legal formality that separates the entity from BYU–Idaho, but the change has had large implications for Church members.

Continual growth within the few years Pathway has been available shows the increasing interest—and need—for higher education among Church members throughout the world.

Unlike many higher institutions of learning where high costs, intense selection processes, and lists of prerequisites are required, BYU–Pathway Worldwide provides a different experience.

“You’ve got all of these schools who have been focused on the traditional student market,” said President Gilbert. “BYU–Pathway Worldwide was built for those students who didn’t think they could start college, started college and dropped out, or missed their window and are looking to have another chance. We’ll just keep growing, especially internationally, but even domestically. People forget that 60 percent of the U.S. Church [membership] doesn’t have a bachelor’s degree.”

In many areas of the Church, Pathway students make up the equivalent enrollment of a community college in the area.

“For the most part, students say, ‘BYU–Pathway gave me the chance I didn’t think I was going to have,’” President Gilbert said.

It has been nearly a year since Clark G. Gilbert’s inauguration on November 16, 2017, when he became the first president of BYU–Pathway Worldwide (see related article).

Building upon what has been established over the last decade has provided opportunity for growth, development, and reflection. One of the main focuses of the last year, President Gilbert said, has been prioritizing what courses the organization offers.

“We don’t do everything, but what we do, we do well, and we do it for everyone,” President Gilbert said. “What we do has to work everywhere the Church is.”

The gateway curriculum—PathwayConnect—is based on face-to-face gatherings, online learning, and religious teachings and is a low-cost option for education with few requirements to enroll. PathwayConnect is three courses of curriculum accompanied by meetings every Thursday evening with local groups and facilitators.

After students have completed PathwayConnect, they are able to continue their education with online courses offered through BYU–Idaho.

But rather than offering a degree in every subject, administrators and educators at BYU–Pathway Worldwide have evaluated the programs closely and have been deliberate in what degrees are offered.

To accomplish this, a certificate-first approach has been created.

“These certificates will allow you to build a more customized degree experience,” according to materials from BYU–Pathway Worldwide. In other words, instead of just earning a generic business degree, BYU–Pathway students can now earn their degrees while also specializing in a series of marketable certificates.

A “certificate-first” approach allows students to choose from several course options to earn certificates that will qualify a student for an associate’s degree and, if continued, a bachelor’s degree.

Rather than just focusing on the end result of a bachelor’s degree like traditional universities and colleges, BYU–Pathway ensures students are able to earn certificates along the way that help them focus on specific skills leading to better employment, often before they have even completed a degree. In the same amount of time and for the same cost, a student completes several certificates, an associate’s degree, and a bachelor’s degree.

Beginning in April 2019, students will have the option to choose from 28 certificates in the categories of business, technology, marriage and family studies, family history research, and professional studies.

“Once they get a certificate, two things happen,” said President Gilbert. “One is they get a sense of accomplishment, and the other one is 70 percent of our students who get a certificate immediately get a better job. They’ve been hearing education pays, but now they know it does.”

A combination of required certificates then qualifies a student for an associate’s degree in one of five categories: applied management, applied technology, marriage and family studies, family history research, or professional studies.

As students move on, they are able to earn more certificates that then make up their bachelor’s degree in one of four categories—applied management, applied technology, marriage and family studies, and professional studies.

“What we’re finding is, because we are certificate first but still bachelor’s focused, the modular curriculum means once you get a certificate the persistence rate jumps from 65 percent to 86 percent,” President Gilbert said.

“Someone cheering them on”

In addition to creating a modular, certificate-first approach curriculum, another big change announced in the last year was the addition of a mentor for every student enrolled in Pathway.

“We’ve done a lot of research of online universities and it looks like there is pretty compelling data to say when you are an online student and you don’t have a campus and you don’t live in residential dorms, having someone you can connect with who understands you, who is empathetic to the challenges you’re going through … can have a real positive impact on your experience,” said President Gilbert.

For Steven K. Thomas, who oversees mentoring for BYU–Pathway Worldwide, adding mentorship to education is something he has studied extensively and, most important, he knows personally. 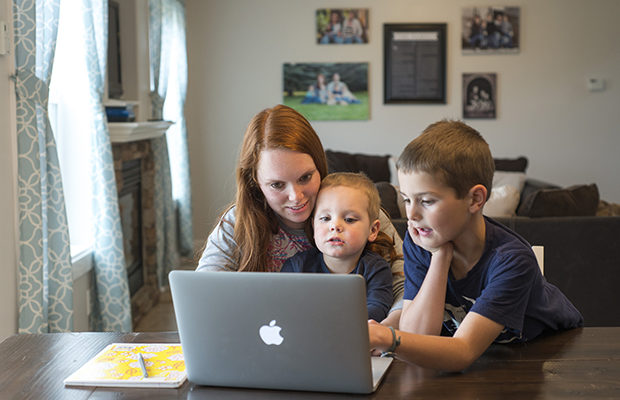 Looking at his time as a high school teacher for three years in an area of at-risk youth as well as in his own experience as a struggling college student, he knows the impact a mentor can have on a student.

“We want our students to know they aren’t alone and that they have someone cheering them on who wants them to succeed,” said Thomas. “Our number-one goal is to keep them in the program.”

Recognizing that every student won’t need the same type of mentoring, Thomas said they have been trying to figure out the “right treatment” for students individually. They have also tried to be effective in when contact is made, making sure mentors are checking in at crucial times of the semester or program.

“We look at the needs of each student and try to account for different parts of their life that might get in the way of them being successful,” Thomas said. “For some, a mentor who sends a message through email once or twice during the semester may be what they need. For others, a phone call once a week or a text every other week might be what they need. We are trying to cater to the student in knowing how the person receives mentoring in a way they are comfortable with and feel supported.” 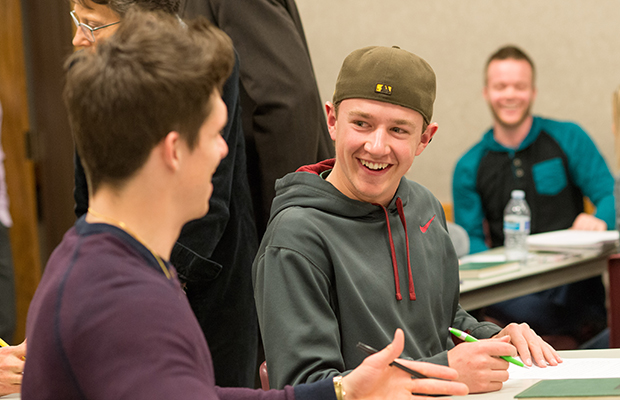 Without a physical campus for the more than 40,000 Pathway students living in various countries around the world to gather, President Gilbert has found other ways to unite his student body.

Although only a brief message, less than 10 minutes long, the first devotional has been viewed close to 40,000 times.

“I always felt when I was president of BYU–Idaho and as a student at BYU, one of the powerful things about having [devotionals where] the Brethren speak to the students is that they are speaking right to you,” President Gilbert said. “Now we don’t gather in an auditorium to listen, … but we get to listen to a leader who is talking directly to the students. Not only do [the messages] address the specific needs of students, but it is powerful spiritually to have this worldwide group all feel connected as they watch [someone] speak directly to them.” 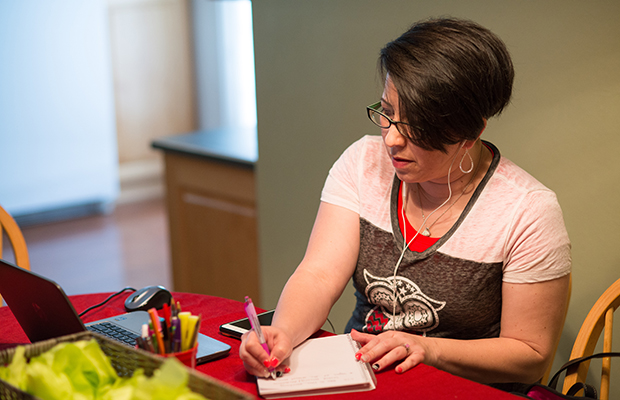 “Pathway is for the kingdom”

In his role as vice president of field operations for BYU–Pathway Worldwide, Brian K. Ashton, who is also a member of the Sunday School General Presidency, works with Area Presidencies of the Church throughout the world.

“My primary role is to work with the Area Presidencies to help accomplish the goals of the area,” Brother Ashton said. “Each area is a little different, and we are able to tailor the program in a way to help more people get an education. We’ve seen how Pathway has helped spiritually and temporally.”

Whether it is working on becoming self-reliant, helping returned missionaries stay active in the Church, or educating members who may not have the means or requirements for local universities, Brother Ashton said Pathway has been a positive solution for many of the Area Presidencies’ identified needs.

Whatever the initial reason for bringing Pathway to an area, Church leaders and students have said their involvement allows members to “get an education and come closer to the Lord.”

“Students’ testimonies have become stronger, they are able to rely upon the Lord, and they are learning by study and by faith,” Brother Ashton said. “They also gain a confidence, and a large number of them continue on to receive additional education that turns into getting a better job. 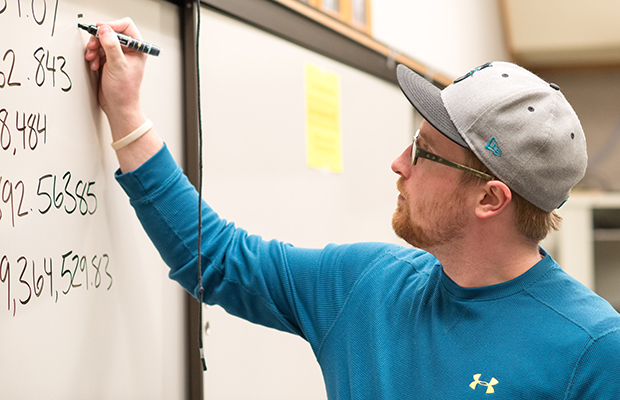 A man applies what he has learned in a BYU–Pathway gathering. Photo courtesy of Michael Lewis, BYU–Idaho.

“I see spiritual boosts, confidence boosts, learned leadership skills, individuals making more money, and [students] on the path to get a degree. I see them becoming leaders in their homes and leaders in the Church and in the community.”

Although his job and his Church calling were issued separate from each other, Brother Ashton expressed how rewarding it has been to see how they interact as he works with so many departments of the Church.

“We interface with Self-Reliance Services, the Missionary Department, seminaries, and institutes,” Brother Ashton said. “We are working together to really make a big difference.”

Pathway is more than the three courses that lead to an online program to receive an associate’s or bachelor’s degree—Pathway is one way for members to elevate their circumstances and come closer to Christ.

“President [Russell M.] Nelson taught us early on that Pathway is for the kingdom,” said President Gilbert. “We are using the resources of the Church to bless the Church in a much more affordable way that could never have been done without the Church itself.”