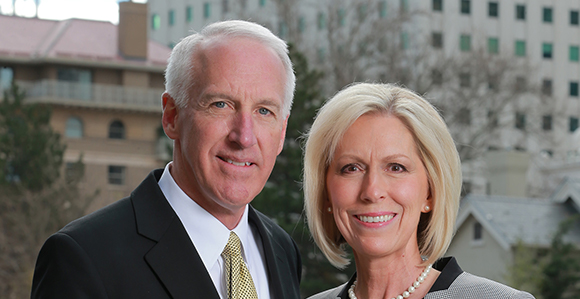 Earned an associate of science degree in family living from Brigham Young University.

“Our family motto has always been ‘Trust in the Lord with all thine heart; and lean not unto thine own understanding. In all thy ways acknowledge him, and he shall direct thy paths’ (Proverbs 3:5–6),” said Sister Joy D. Jones. She was called to serve as Primary General President during the 186th Annual General Conference in April. This motto will continue to be an inspiration in her new calling.

The fifth of seven children, Joy Diane Harmon was born to Aldo Harmon and Eleanor Adelia Ellsworth Harmon in The Dalles, Oregon, in 1954. She was blessed to have the example of faithful parents who loved the Lord.

“As a little girl, even as a teenager, I felt like my dad was my hero and he could do anything,” she said. “My mom was a remarkable woman. My parents were humble, hardworking members of the Church. They were completely devoted to their family and the gospel of Jesus Christ.”

“I have a very strong testimony of our priesthood leaders and how the Lord works through them to teach, direct, and guide our lives,” Sister Jones said. This testimony came when she was around nine years old during a district conference in Oregon, at which President Robert L. Backman, the president of the Northwestern States Mission, spoke. “I felt something very powerful when he was talking,” she recalled. “I felt something really different than I had felt before. … I am so grateful for that because I received a witness from the Holy Ghost that the things he was saying were true.”

“Go to BYU. Be married in the temple.”

Ever since she was young, Sister Jones has loved learning and wanted to be a wife and mother. “I had a little paper that hung on my closet door, probably from about age 12 on. It said, ‘Go to BYU. Be married in the temple.’ I always had that little paper up there, and it reminded me I wanted to continue learning and prepare for the temple,” she said.

Sister Jones recalls taking the big step to leave Oregon to attend BYU. “I remember my parents filling up a trailer with all of my belongings and pulling it from Oregon to take me to BYU. That was an exciting day.”

Sister Jones earned an associate of science degree in family living at BYU. “When I was studying family living, I was learning about diet and nutrition, … clothing and textiles, raising children, child education, … [and] family economics. I was learning so many things I hoped would help me be more well rounded as a mother. I really wanted to prepare.”

At a BYU family home evening group, she met Robert Bruce Jones, who just happened to be from Portland, “and I lived just down the Columbia River from him in Oregon,” Sister Jones said. They were married in the Manti Utah Temple on August 14, 1974. “I loved him for always putting the Lord first in his life, and he still does,” she said. Brother Jones attended Western States Chiropractic School before they decided to move to Santa Rosa, California. “We knew that was where we were supposed to be at that time,” Sister Jones said. They spent 14 wonderful years creating eternal memories and friendships there.

They moved their family to Utah in 1994. As they were house-hunting in Draper, Brother Jones repeatedly mentioned that he felt like they had “come home. Draper feels like home to me.” They soon found a home and moved shortly thereafter. Brother Jones was surprised to later learn from his father that his ancestors had helped settle Draper. He really was coming home.

“We’ve been happily planted in Draper ever since,” Sister Jones said. One of the blessings she has enjoyed by living in Draper is having the advantage of a temple nearby. “Attending the Jordan River Utah Temple, and later the Draper Utah Temple, provided a sacred space for me. … I have a testimony of the power of the temple and the peace that it has brought me in my life,” she said. “I am so grateful for the covenants that I’ve made and the ordinances I’ve received in the temple and the opportunity to be in the Lord’s house. I always feel the Lord’s Spirit when I’m there.”

Sister Jones said that she is grateful for guidance and direction the gospel provided in their home while raising their children. “I’m so grateful for prayer, scripture study, and family home evening,” she said. “Looking back, it wasn’t always easy, but now we see how it strengthened, blessed, and unified our family. You do those things in faith out of love for Heavenly Father.”

Today all five of their children are married and raising children of their own. They have each graduated from BYU, and four have served missions in various places around the world. Another daughter’s testimony was strengthened as she did study abroad in Israel. Over the next few months, Brother and Sister Jones will welcome their 18th and 19th grandchildren. They love spending time with their grandchildren. “Family time is high priority,” Sister Jones said. “Anything that I can do with my family is happy time.”

Sister Jones said, “I love to look into the eyes of children. There is so much light and trust there. I pray every day that our youth and their families will feel the Savior’s love and recognize and follow His Spirit. I know He will lead them to His holy temple and to the blessings of eternity to be found in receiving ordinances and making covenants with our Father in Heaven.”

“I feel like Heavenly Father has done a loving job of leaving a breadcrumb trail throughout my life for me,” Sister Jones said. “There have always been little breadcrumbs that have led me to the next step. Even when I prayed and didn’t feel like I was getting the answer that I wanted, He always had something better in store for me.”