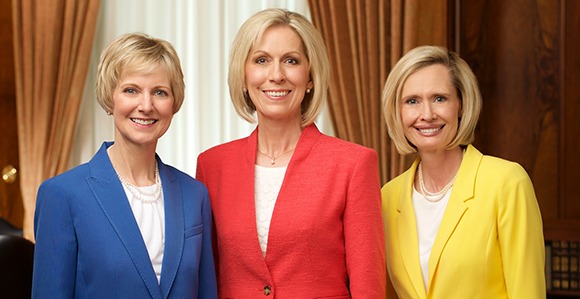 The First Presidency announced a new Primary general presidency during the Saturday afternoon session of the 186th Annual General Conference on April 2.

Sister Jones was beginning her sixth year of service on the Church’s Primary general board at the time of this call. She has also served in several assignments in her local congregation, including work as Relief Society president and time in the Young Women and Primary organizations. Sister Jones was born and raised in Oregon and married Robert B. Jones while attending Brigham Young University, where she received a degree in home and family sciences. She and Robert have five children and 13 grandchildren.

Sister Bingham was also in her sixth year of service on the Primary general board at the time of this call. Her previous Church assignments include service in her local ward Young Women and Primary organizations, as well as time as a seminary teacher. She is a native of Provo, Utah, and received a master's degree in education from BYU. Sister Bingham and her husband, Bruce Bingham, are parents of two daughters.

Sister Cordon served with her husband, Derek Cordon, in the Brazil Curitiba Mission from 2010 to 2013 when he was the mission president. She was a full-time missionary in the Portugal Lisbon Mission from 1982 to 1983 and is fluent in Portuguese. She has also served in the Young Women, Relief Society, and Primary organizations of her local congregation. Sister Cordon was born in Idaho Falls, Idaho, and received a bachelor’s degree in education from BYU. She and her husband have four children.