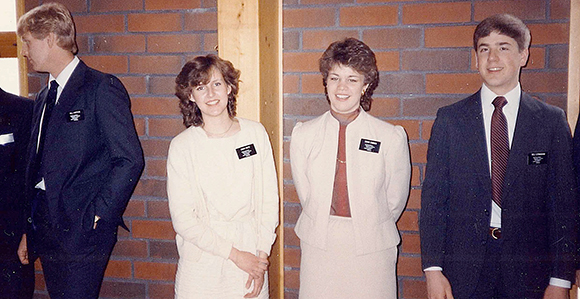 Sister Sharon Eubank of the Relief Society General Presidency served a mission in Finland in the 1980s.

“We all have times that are dark, that are cold, and where we don’t know what we’re doing. But give it enough time, and the Lord will fill in the holes and the pits with something great, something beautiful.” —Sister Sharon Eubank

Arriving in the city of Tampere, Finland, in December 1984 as a young missionary was a bit of a shock for Sister Sharon Eubank. Finland had record-breaking freezing temperatures that winter, and adjusting to the 10 a.m. sunrise and 2 p.m. sunset was difficult.

“I didn’t know anything. It was cold, it was dark, and I was trying something new for the first time,” said Sister Eubank, First Counselor in the Relief Society General Presidency and president of Latter-day Saint Charities, of her first few months in Tampere.

Speaking to the Church News in her office in the Relief Society Building on Temple Square after returning from a recent visit to Finland where she spoke at a national women’s conference organized by Relief Society members from Finland’s two stakes, Sister Eubank reflected on how much has changed since her time there as a young missionary.

One of the things she remembers most from her first few months as a young missionary is a giant construction site that was located directly across the street from the missionary apartment she shared with her trainer in Tampere.

“It was icy and dirty,” Sister Eubank said, “and every time we went to catch a bus, we had to go past that construction site to the other side. My very seasoned companion would walk sedately across the ice, and … I would run around the other side to catch up.”

In her memory, that construction site, much like the darkness and the frigid cold, was simply another inconvenience that made adjusting to life as a missionary difficult. After seeing that same site on her recent trip to Finland, however, Sister Eubank said it has more meaning.

Taking a little time for herself in Finland in September, Sister Eubank walked to visit her old apartment in Tampere to see what had become of that dirty old construction pit.

“I walked to the apartment, and I could see the number,” Sister Eubank said. “But where that pit had been was this beautiful, architecturally gorgeous library that had been built.”

The whole block was gorgeous, she said, noting that the beautiful fall leaves and changing colors added to the contrast of what she remembered from her time there as a missionary.

Reflecting on the changes, Sister Eubank said the old construction site and the library it had transformed into were somewhat reflective of her life.

“I’ve learned that if you give something enough time, it can develop into something beautiful, like this beautiful library that became a center for the city,” she said. “We all have times that are dark, that are cold, and where we don’t know what we’re doing. But give it enough time, and the Lord will fill in the holes and the pits with something great, something beautiful. And I think that’s true in my life.”

Sharing a similar analogy at the national women’s conference—hosted by the Church and held at Tampere University on September 21—Sister Eubank compared two photos.

At first glance, the two photos look nearly identical. Sister Eubank is wearing the same dress in each photo and has the same basic hairstyle. The most pronounced difference is the attitude that radiates from her in each of the photos. In the first she appears shy and reserved, perhaps unsure of herself. In the second, she exudes a confidence and a light that is warm and inviting. The first photo was taken at her missionary farewell, she said, while the second is from the day she returned home.

“What happened to me in-between those photos changed everything about my whole life,” Sister Eubank told the more than 600 women from Finland, Russia, and the Baltics in attendance. “And the space between them is what has allowed me to have the career I have now. It is where I learned how to talk to people, how to find out what they really care about, and how to respond in a human way.”

Since her mission, Sister Eubank said the thing she has wanted most in her life is to be an instrument of the Lord. I just want to be an instrument of His grace, His hope, His love, and help whoever comes across my path,” she said. And the best way she has found to do that is through service to those around her.

“Service is the way we keep two great commandments of God in practice,” she said. “How do I show that I love God? By keeping His commandments and loving my neighbor. And how do I love my neighbor? By serving them.” 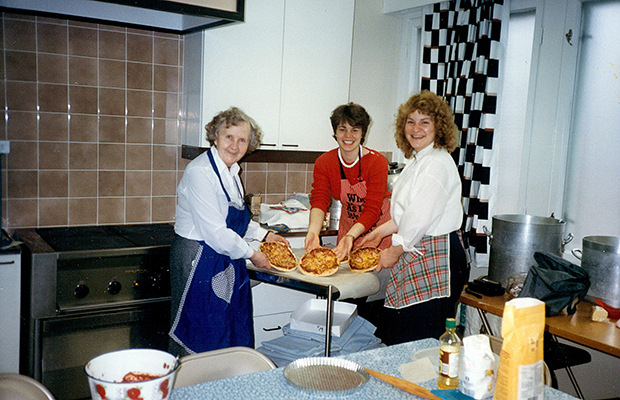 Sister Sharon Eubank of the Relief Society General Presidency served a mission in Finland in the 1980s. Photo courtesy of Sister Eubank.

People often think that service means they need to save a lot of money to do a big humanitarian project or trip, but the most meaningful service usually comes through small acts that help others one comes into contact with on a daily basis.

“When we are willing to look around for opportunities, the Lord can use us,” she said. “He points us to the people who need us and we become an instrument of His love.”

During her presentation, Sister Eubank emphasized the important role that service can play throughout a person’s life. Women can and should be serving one another in every stage of life because it is through service that we are strengthened not only as individuals, but also as communities, she explained.

Service is part of the refining process that can help turn dark, difficult times into beautiful moments of learning, she said.

For the women who attended, the conference provided a unique opportunity to gather together with women from all over and to connect with each other and be strengthened by hearing one another’s stories.

One conference attendee, Milli Silvennoinen, was reported by Church Newsroom as saying, “I just feel like it’s important that we come together, we support each other, and we ... learn from each other’s experiences. I was grateful for the unity that I felt here and how they brought all these different people together. It feels like we’re all different, but we all still belong.”

There is power in meeting together, especially as women, Sister Eubank said after the conference.

“There was a great feeling of uplift because we were together,” she said. “This is why the Church comes together in different ways, and I hope we’ll do it again.”

During her visit, Sister Eubank also joined Helsinki Stake Relief Society President Pini Kemppainen and her counselors to meet with leaders of local refugee aid organizations in Helsinki, Finland—the Finnish Refugee Council, SOS-Lapsikyla, and Martat (the Martha Association)—to initiate partnerships between the Relief Society and those organizations and allow for greater service opportunities. 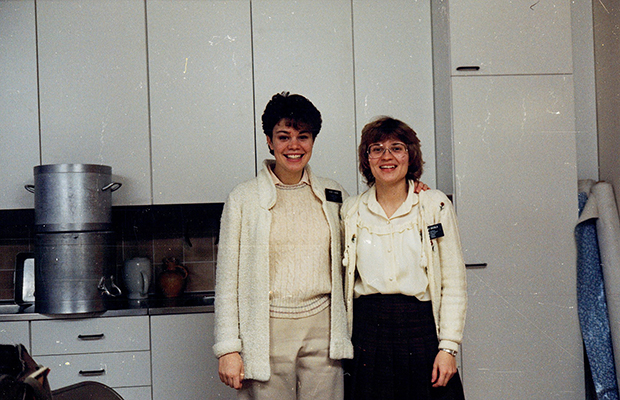 Sister Sharon Eubank of the Relief Society General Presidency served a mission in Finland in the 1980s. Photo courtesy of Sister Eubank. 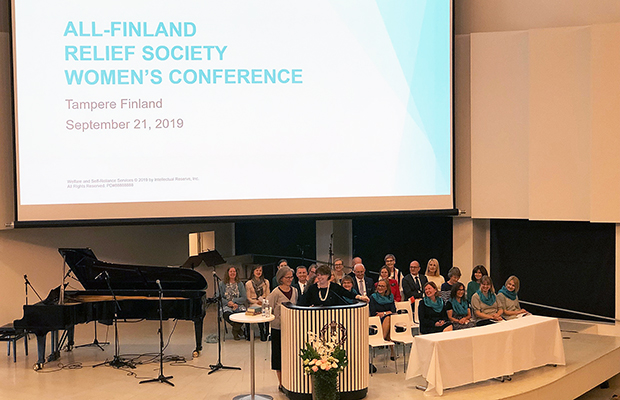 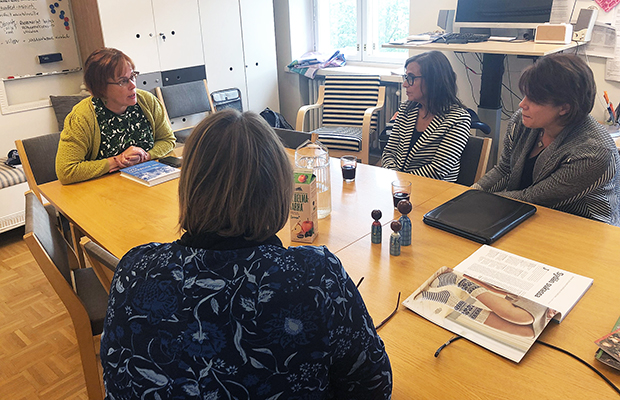 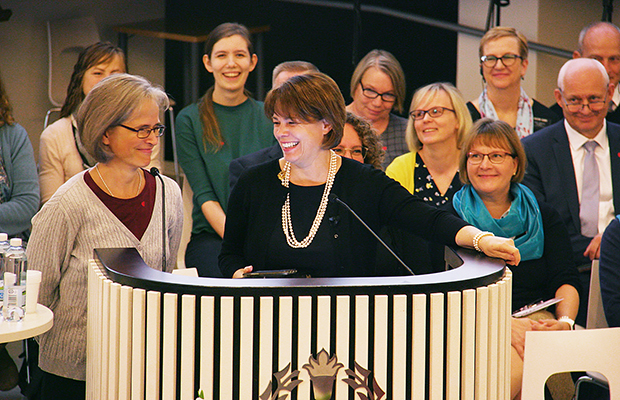 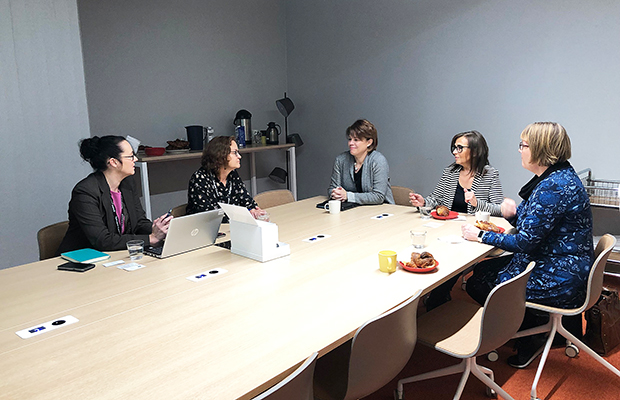 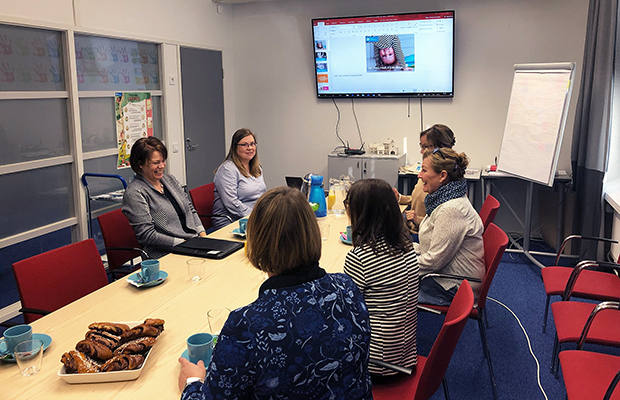 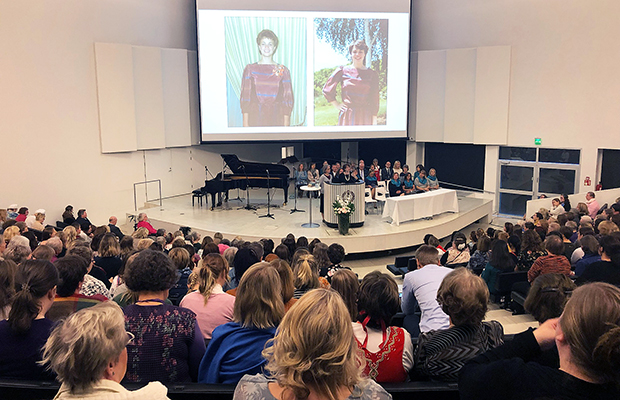 Sister Sharon Eubank shares mission photos with hundreds of attendees at a national women’s conference in Tampere, Finland, Saturday, September 21, 2019. She delivered parts of her message in Finnish. 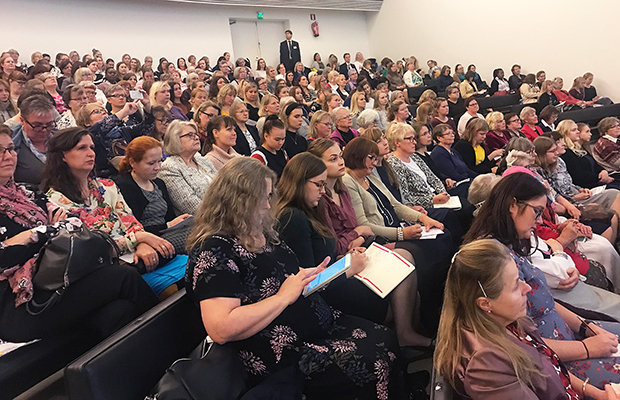 More than 600 women attended a national women’s conference at Tampere University in Tampere, Finland, Saturday, September 21, 2019. The meeting was hosted by The Church of Jesus Christ of Latter-day Saints.

More than 600 women attended the meeting at Tampere University in Tampere, which was hosted by The Church of Jesus Christ of Latter-day Saints on Saturday, September 21, 2019.