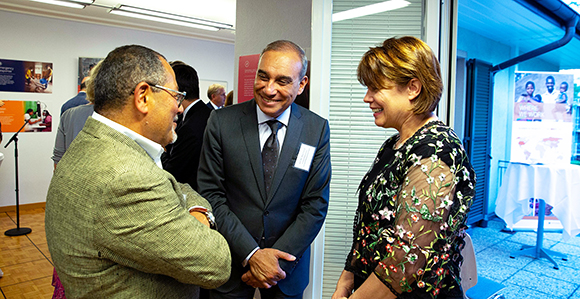 Millions of people have been helped around the world by Latter-day Saint Charities, Sister Sharon Eubank, the organization’s president and First Counselor in the Relief Society General Presidency of The Church of Jesus Christ of Latter-day Saints, said during a reception in Geneva, Switzerland, on September 16, 2019. Photo by Francesco Di Lillo.

“The work we want to do is too big to do it by ourselves. We have to collaborate among partners and let each organization really leverage their specific strengths.” —Sharon Eubank

After being named director of Latter-day Saint Charities in 2011, Sharon Eubank took a trip to New York. As the director of the organization, which had received its official consultative status by the United Nations Economic and Social Council only months earlier, she was eager to share the amazing work the organization was doing.

“I went to some of the U.N. agencies and other partners and gave them our annual report and explained who we were and the scope of what we were doing,” said Sister Eubank, who now also serves as First Counselor in the Relief Society General Presidency, recounting her initial trip as director to New York. “But one woman said to me, ‘I don’t mean to be rude, but if this were really true, I would have heard of you.’”

That one simple interaction helped Sister Eubank realize that in order to do the type of multilateral, multinational humanitarian work around the world that was needed and desired from the organization, Latter-day Saint Charities needed to do a better job of introducing people to their work. The organization also needed to be more active in participating in the forums and conferences that drive networking and partnerships between organizations with similar interests, including the U.N. and its associated partners.

This year, Latter-day Saint Charities showed how far they have come as an accredited U.N. consultative organization when they sponsored their first U.N. side event at the U.N. headquarters in Geneva, Switzerland. A side event is a conference that brings interested parties together to discuss a certain topic.

The side event was also the first conference that Bishop Gérald Caussé, Presiding Bishop of the Church, has attended in Geneva, and he noted how impressed he was by the reputation of Latter-day Saint Charities there.

“I was impressed with how trusted and recognized our people are,” he said. “There was a lot of appreciation that was expressed by other organizations on behalf of Latter-day Saint Charities and the Church.”

Bringing together partners from around the world—including diplomats and leaders from various countries as well as partner organizations like the United Nations Children’s Fund (UNICEF), Catholic Relief Services, International Rescue Committee, and the African Union—the Latter-day Saint Charities–sponsored conference focused on the theme of collaboration to advance education among displaced populations.

When it comes to refugees and displaced populations, only the most basic of needs, like food and shelter, can be covered by emergency funding from the U.N. agencies, Sister Eubank told the Church News. Which is why, as their inaugural platform, Latter-day Saint Charities chose to focus on education—an area that currently lacks resources.

“We wanted to highlight the situation many displaced families find themselves in,” Sister Eubank said. “They often can’t go home, they’re not always well accepted in the places where they are staying, and in the meantime, with every year that clicks by, their kids are not attending school. And that creates a problem not just for this generation but for the next generation. So we wanted to bring attention to this topic and seek creative remedies to address it.” 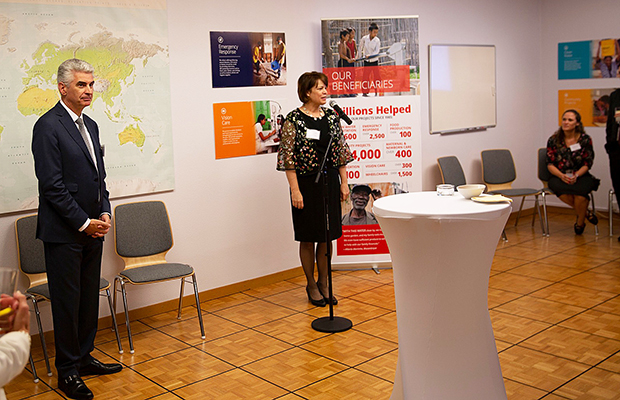 Sister Sharon Eubank, president of Latter-day Saint Charities, explains what the Church charity does for people in need around the world during a reception in Geneva, Switzerland, on September 16, 2019. Presiding Bishop Gérald Caussé is also pictured at left.

Prior to the formal side event conference, held on September 17 at the U.N.’s Palais des Nations, Latter-day Saint Charities hosted a VIP reception at their offices in Geneva on September 16. The reception offered a chance for more collaboration and partnership among attending organizations and leaders.

“We have been engaged in a lot of partnerships worldwide, and we wanted to emphasize the importance of partnership—that when people of all faiths and all origins come together and try to help others we can do things beyond what we could do ourselves,” said Bishop Caussé. “And we thought we could facilitate that idea by putting everybody around the table. We all have the same goals. We want to help others, and we thought we could be a facilitator for that.”

Bishop Caussé said he hoped the reception allowed guests to feel the spirit of the Church and learn more about its history, purpose, and charitable work.

“It was a beautiful event, and there was a great spirit there,” Bishop Caussé said. “And Sister Eubank and myself, we took that opportunity . . . to explain a little bit more about the connection between Latter-day Saint Charities and the Church.”

Geneva is one of the capitals of the world, Bishop Caussé said, explaining why they decided to host the conference there at this time of year.

Nearly every continent was represented during the conference, and that “gives a lot of strength to our message, because people understand that we are [a] global faith,” he said. “We are the Church of Jesus Christ; we are not necessarily an American church. We are a church that really, truly participates in the world’s arena.”

September is also the time of year when those involved with the Human Rights Council gather in Geneva, Sister Eubank explained, so the conference offered the perfect opportunity to bring together all the necessary partners to really move the collaborative discussion about education for displaced populations forward.

“This conference was really one of the first times that we’ve brought these different sectors together to talk about how we can cooperate better,” she said. “We’re all doing really good work in our own sectors, but we wanted to know what could be done if we could cooperate together.” 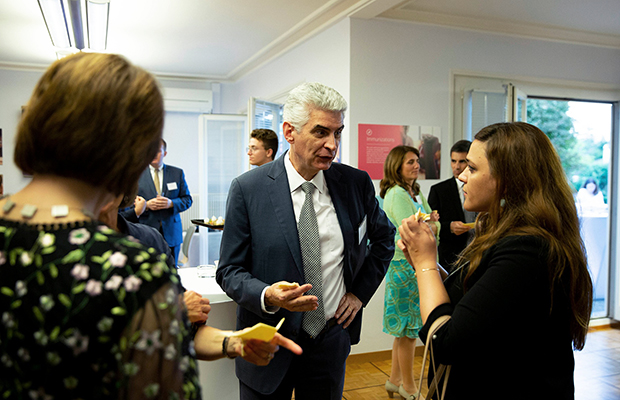 An Urgency for Education

During the formal conference meetings the following day, Bishop Caussé offered the first keynote address, focusing on the importance of partnerships among the types of organizations and leaders in attendance.

Sharing numbers from a recent UNHCR report, Bishop Caussé explained that only 61 percent of refugee children attend primary school, and even fewer, about 23 percent, attend secondary school. When compared to the global rates of 92 percent and 84 percent of children able to attend primary and secondary schools, respectively, the large gap of education among refugee populations will create a chasm of ongoing ramifications for generations to come, Bishop Caussé explained.

“These figures present a staggering challenge that will only be meaningfully addressed by our working together,” he said. “All of us are here to join forces in helping people find hope in their lives.”

For example, in the Bidi Bidi refugee camp in Uganda, Bishop Caussé said, each of the organizations involved—from the government leaders to the NGOs (nongovernment organizations) and faith-based organizations—worked together to take on different but collaborative roles to ensure access to education and educational resources for displaced children in the area.

Such partnerships can “do much in healing human souls, as they help build or rebuild people’s core identity through purpose, choice, friends, and faith,” Bishop Caussé said in the conclusion of his address. If such work is to continue, organizations “must work differently and in partnership to achieve our goal of a world where education is accessible to all individuals regardless of their status,” he added.

Following Bishop Caussé’s address, representatives from the African Union and International Rescue Committee also addressed the audience of around 75 representatives. Later, a panel discussion was held focusing on how to better partner and meet the educational needs of displaced populations.

For Sister Eubank, one of the greatest outcomes from the conference was the increased awareness for the urgency surrounding the issues of education for refugees.

“This isn’t something that we can work on for the next 30 years and hope that it works out,” she said. “If we don’t do something to rescue the generation that is caught right now, . . . we will lose the chance and it will have endless reverberations in society. So this is the window.” 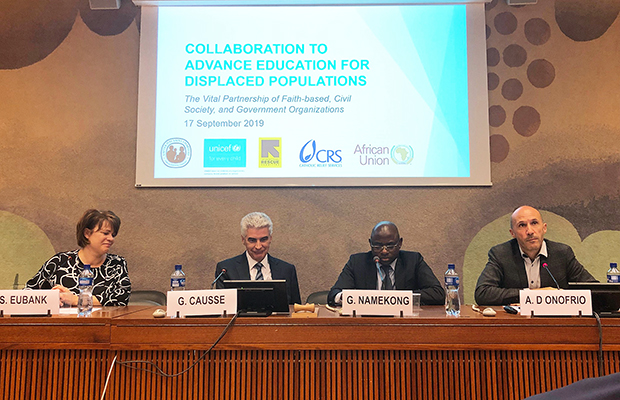 Presiding Bishop Gérald Caussé and Sister Sharon Eubank, president of Latter-day Saint Charities and First Counselor in the Relief Society General Presidency, participate in a panel discussion at a worldwide gathering in Geneva, Switzerland, on Septemeber 17, 2019.

Looking to the Future

When it comes to multilateral humanitarian work, organizations have to work with the U.N. They are simply the only organization that can effectively coordinate multilateral work, Sister Eubank explained.

“The work we want to do is too big to do it by ourselves. We have to collaborate among partners and let each organization really leverage their specific strengths,” Sister Eubank said.

Bishop Caussé added, “I think it’s only the beginning of what we want to do. We want the world to recognize the good influence that Latter-day Saints can have in helping those in need. We want to be not only known but also appreciated as people who are trusted and have great values. And so I hope and I trust that we will have other conferences of this type in many different areas in the world.” 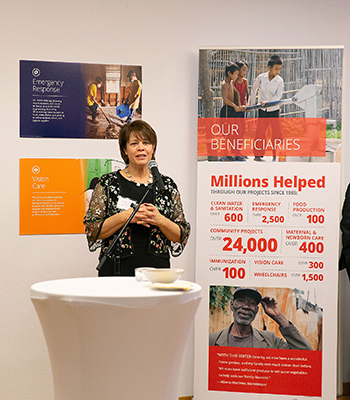 Sister Sharon Eubank, president of Latter-day Saint Charities, presents about the organization during a reception in Geneva, Switzerland, on September 16, 2019.

Millions of people have been helped around the world by Latter-day Saint Charities, says Sister Sharon Eubank, the organization’s president and First Counselor in the Relief Society General Presidency, during a reception in Geneva, Switzerland, on September 16, 2019.

A worldwide delegation of religious and charity leaders gathers in Geneva, Switzerland, on September 17, 2019. 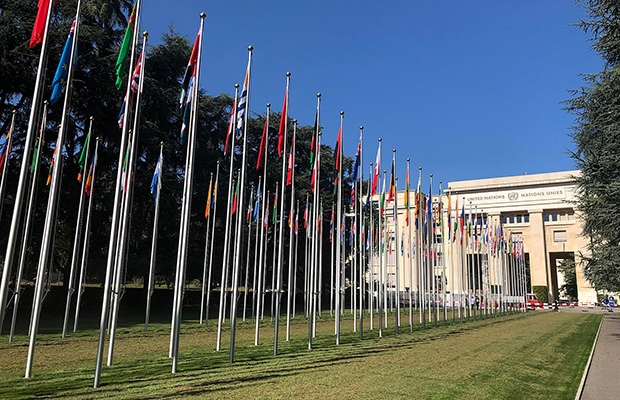 A worldwide delegation of religious and charity leaders gathers in Geneva, Switzerland, on September 17, 2019. 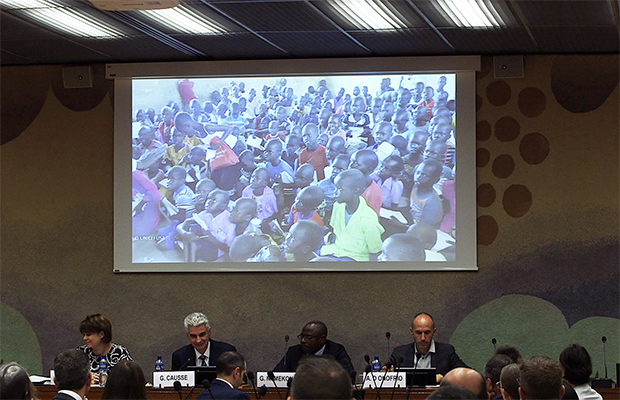 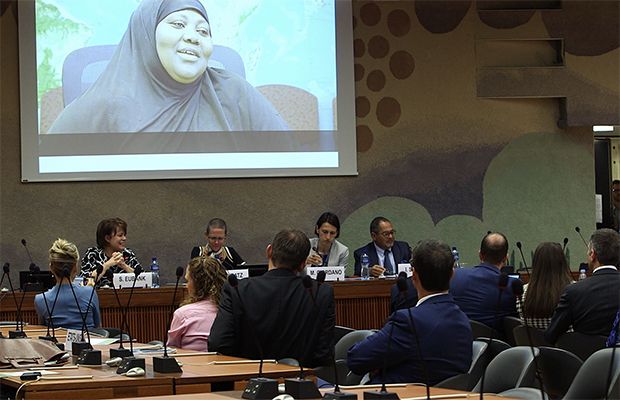 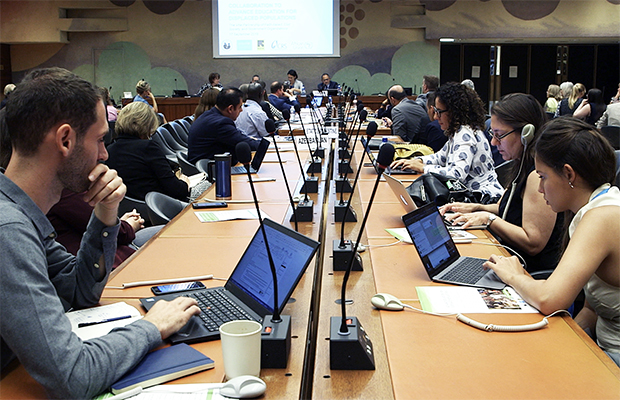 An audience listens to a panel discussion at the U.N. in Geneva, Tuesday, September 17, 2019. The event was hosted by Latter-day Saint Charities. 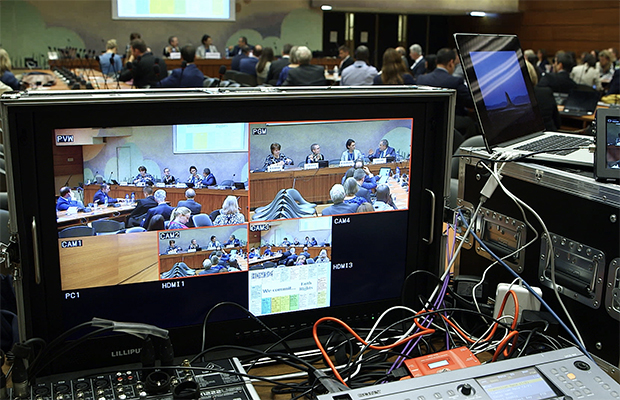 Behind the scenes at a panel discussion at the United Nations in Geneva, Tuesday, September 17, 2019.