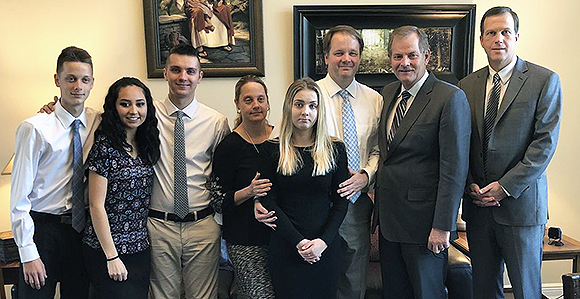 Elder Gary E. Stevenson of the Quorum of the Twelve Apostles and Elder Jörg Klebingat, a General Authority Seventy, visit the family of LDS teen Alaina Petty of the Coral Springs Florida Stake, who was one of the 17 people killed in the February 14 shooting at Marjory Stoneman Douglas High School.

“Alaina was an amazing young lady. … A sweet little angel who wanted to be your friend. … She knew right from wrong but never made you feel like she was judging you for your choices.” —Ryan Petty, father

Much has been said and written about Alaina Petty in the mournful days following last week’s school shooting at Marjory Stoneman Douglas High School.

Fourteen-year-old Alaina—who was one of the 17 people killed in the February 14 tragedy—has been honored for her “think of others first” spirit, her fun-loving personality, and her devotion to her family, friends, and faith.

But perhaps no one can define the high school freshman more completely and simply than her own mother:

“Alaina was just a very nice person,” said Kelly Petty. “She was a good person.”

In a conversation with the Church News, Kelly Petty and her husband, Ryan Petty, shared memories of their youngest child, who will forever remain an anchoring member of their family.

The couple added they have “no anger” toward the young man accused of their daughter’s slaying. They focus instead on Alaina’s legacy of service even while comforting those around them who share their grief.

“Alaina was an amazing young lady. … A sweet little angel who wanted to be your friend,” said Ryan Petty. “She was a determined girl, but she was never judgmental. She knew right from wrong but never made you feel like she was judging you for your choices.” 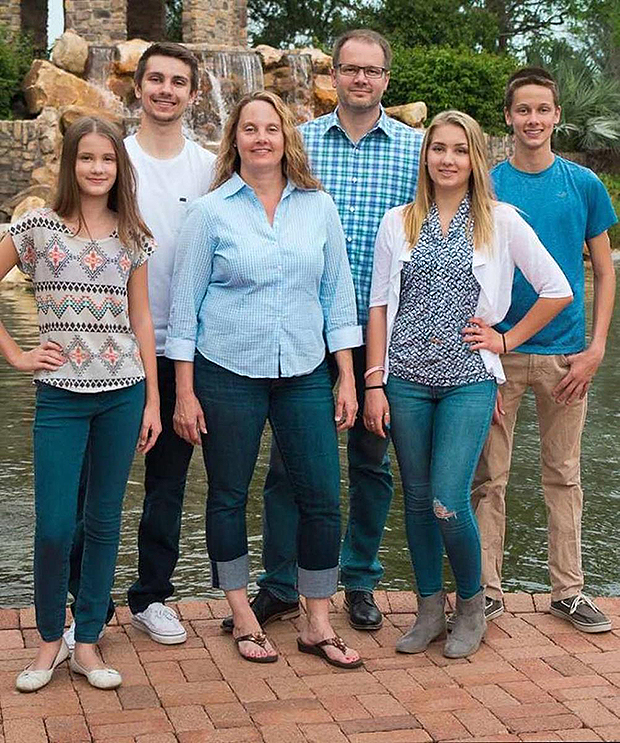 A photo of the Ryan and Kelly Petty family, including 14-year-old Alaina Petty, who was was one of the 17 people killed in the February 14 shooting at Marjory Stoneman Douglas High School. Photo courtesy of the Petty family.

The Pettys were surprised at the beginning of the school year when Alaina decided to join the high school’s JROTC program. Later they realized she was anxious to follow “her brother Patrick’s footsteps” into the program. Becoming a cadet was also a way to honor her country and contribute to her school and community.

She was posthumously awarded the JROTC Heroism Medal at her funeral service.

“Patrick had the privilege and honor of presenting his mother with the American flag [that had been draped over Alaina’s casket],” said Ryan Petty. “It was a tender moment as I watched my son slowly raise his hand to salute his mother in honor of his sister Alaina.” 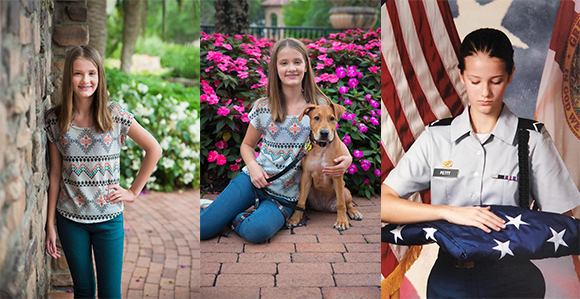 Alaina Petty, 14, a freshman at Marjory Stoneman Douglas High School and a Mia Maid from the Coral Springs Ward, was killed in the February 14 attack that claimed 17 lives. Photos courtesy of the Petty family.

Alaina, a Mia Maid in the Coral Springs Ward, was a typical teen, said her mother.

“She could be very silly with her family and friends—and she always wanted to have fun.”

But she also possessed a spiritual maturity and compassion that was beyond her years. When Hurricane Irma devastated several cities in Florida, Alaina spent many hours on weekends working with fellow youth and adults participating in Mormon Helping Hands recovery operations.

“It was Alaina’s privilege to help those people who were impacted by the hurricane so they could clean up their homes and rebuild their lives,” said Ryan Petty.

Alaina and her friends “weren’t afraid to get their hands dirty” as they went about the grubby work of mucking out homes and clearing out yards. 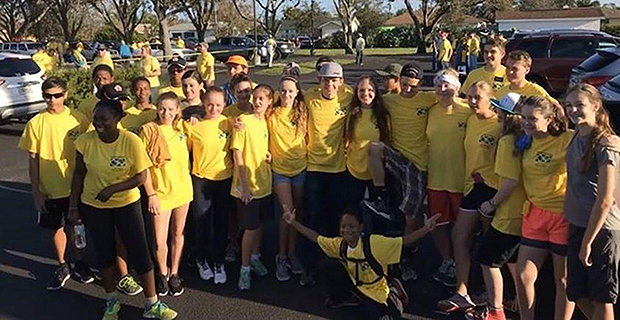 Alaina Petty participates in a Mormon Helping Hands project following Hurricane Irma. Alaina, 14, was was one of the 17 people killed in the February 14 shooting at Marjory Stoneman Douglas High School.

The Pettys said their daughter’s choice to serve was inspired by her faith. “Alaina was aware of her Savior and His sacrifice for all of us and the way He served others.”

The Fort Lauderdale Florida Temple was a second home for Alaina. She loved being in the temple with her family and friends.

A few days after her death, Elder Gary E. Stevenson of the Quorum of the Twelve Apostles and Elder Jörg Klebingat, a General Authority Seventy, visited the Petty family.

Elder Stevenson spoke to the family about the blessings found in the temple as Alaina valued her time serving there often.

“This is an amazing family,” said Elder Stevenson. “We felt the spirit of the Comforter as we entered the home and met each member of the Petty family. This same spirit was felt by all who attended the funeral and heard Alaina’s parents and siblings each offer messages of comfort, hope, and love during the service.” 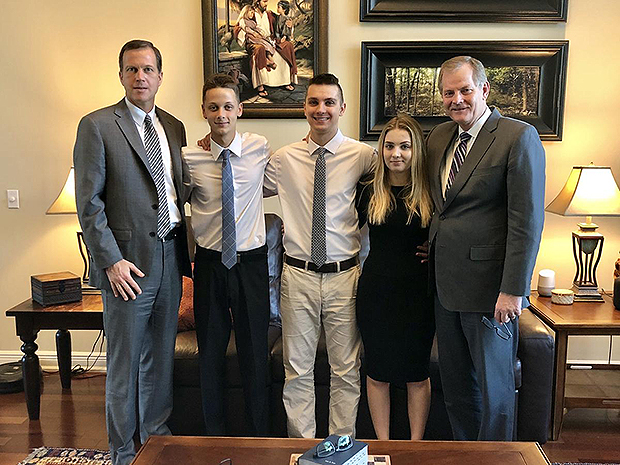 Elder Gary E. Stevenson, right, and Elder Jörg Klebingat, left, visit the family of LDS teen Alaina Petty of the Coral Springs Florida Stake, who was one of the 17 people killed in the February 14 shooting at Marjory Stoneman Douglas High School.

In addition, he shared how the Pettys have found hope and comfort from friends and fellow Church members worldwide.

“There is still a hole in our family that I don’t know will ever be filled [in this life],” said Ryan Petty. “We miss Alaina. We miss being able to wake her up in the morning and give her a hug and send her off to seminary.

“But we know we’ll be together again as a family. That gives us comfort.”

While grief-stricken over Alaina’s death, Ryan Petty said of the accused gunman, “I’m not angry at the shooter. I feel like we, as a society, failed this young man. He did not have the opportunity to live in a family that could love him the way he needed to be loved, to take care of him and understand the challenges and emotions he was feeling, and to give him positive ways to deal with them.”

Loving families, he added, are often remedies to such challenges.

“I can’t help but think that the solutions to these types of problems don’t lie in the policy realm—they lie in having strong families that [care] for their children and live according to Heavenly Father’s plan.”