“We gathered around Maddy, and it was like a spiritual oasis in the midst of all this worldly chaos and oppression.” —Elder Gary E. Stevenson of the Quorum of the Twelve Apostles

When Elder Gary E. Stevenson arrived at the hospital treating Madeleine “Maddy” Wilford, he encountered a medical facility trying to manage both prolific tragedy and horror.

Two days earlier, a lone gunman had shot and killed 17 people at nearby Marjory Stoneman Douglas High School on February 14. Surgeons and nurses at the hospital had been working to keep other shooting victims alive—including 17-year-old Maddy, a high school junior and a Laurel in the Coral Springs Ward. She had been shot four times.

“The hospital was loud and noisy and chaotic,” said Elder Stevenson of the Quorum of the Twelve Apostles. “There were two police officers in the ICU because of the heightened security. You could feel the heaviness and the weight of what had happened.”

Joining Elder Stevenson was Elder Jörg Klebingat, a General Authority Seventy. As the two men stepped out of the hospital hallway and into Maddy’s room, they felt an immediate change—as if light had instantly replaced the darkness of the day.

“We gathered around Maddy, and it was like a spiritual oasis in the midst of all this worldly chaos and oppression,” Elder Stevenson told the Church News. “We were there, in that hospital room, enjoying the fruits of the Comforter.”

Maddy’s family said they too could trace divine hands in the days following the mass shooting. 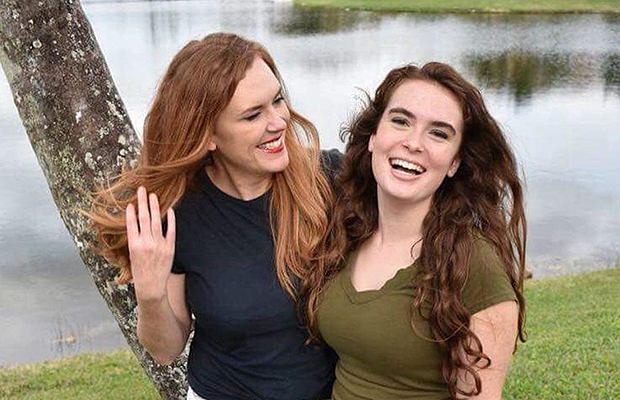 Maddy Wilford, right, and her mother, Missy Wilford, share time together. Maddy, 17, a junior at Marjory Stoneman Douglas High School, was injured during a mass shooting on February 14. Seventeen people died in the tragedy. Photo courtesy of the Wilford family.

There was much to mourn. Seventeen people—including Maddy’s fellow ward member Alaina Petty—had died in the shooting. Yet comfort was also found as they prayed for those who had lost loved ones—and for those, like Maddy, who were holding on to life.

“This is just a miracle,” she said Wednesday, February 21, as Maddy was being discharged from the hospital just one week after the shooting. “Her healing process has been amazing.”

Maddy’s father, David Wilford, said meeting with Elder Stevenson was an incredible experience. “He gave her an apostolic blessing. It was something I hadn’t seen before. He used it to bless the whole family. … There’s no question in my mind that’s why she’s doing so well.”

During his hospital visit, Elder Stevenson felt “a confluence of the Holy Ghost and faith and prayer and priesthood blessings—all of these heavenly powers coming together.”

Elder Stevenson and Elder Klebingat administered to Maddy. They read scriptures together and enjoyed quiet moments of peace and prayer.

Before leaving, Elder Stevenson asked Maddy if she had a message for the youth of the Church. In a soft whisper, Maddy offered a reply:

Elder Klebingat said it was humbling to watch the Apostle’s loving interaction with Maddy and her family. It was not a clinical visit. “You could feel the emotional and spiritual investment as Elder Stevenson spoke softly to Maddy and gently stroked her arm.”

Later, Elder Stevenson presided at a local youth devotional. He spoke to the youth about their friends Maddy and Alaina and also the comfort found in prayer and the Holy Ghost.

“Heavenly Father is aware of us,” he said. “He loves His children. What a blessing it is to have the gospel.”

Missy Wilford said her daughter has found strength in her testimony and the sacred promises found in her patriarchal blessing.

“Maddy knows she was being guarded by angels,” she said. “She knew she was going to be OK.”

Maddy, a talented athlete who is known for looking out for those in need of a friend, has experienced personal trials in her life, according to her mother.

“I think those trials have given her a lot of compassion.”

The Trumps asked Maddy where she hoped to attend college one day. Maddy’s answer: BYU.

“The president told Maddy, ‘Wherever you decide to go, I’ll write you a letter of recommendation,’” according to Missy Wilford.

The first lady also presented Maddy with a pair of commemorative gold coins.

David Wilford said the Lord has a plan for his daughter. “As her dad, I’ll support whatever that is and do what I can to help her with it.”