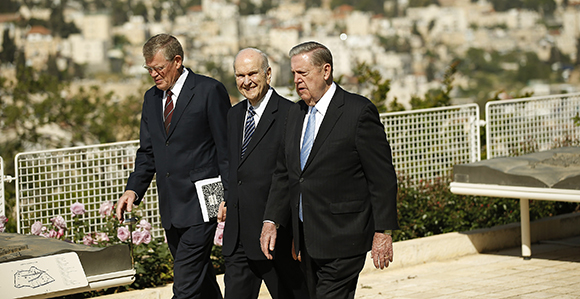 From a vantage point on Mount Scopus, President Russell M. Nelson and Elder Jeffrey R. Holland look over the Mount of Olives and the Old City in Jerusalem on April 14 and ponder this ancient place where the Savior walked and prophets stood.

Defined by mild temperatures, blue skies, a slight breeze, and the smell of newly planted flowers, the quiet, peaceful moment is only interrupted by the audible chirping of birds, occasionally heard above President Nelson’s own voice.

Here, amid this iconic and historic backdrop from the Church’s BYU Jerusalem Center, it’s hard to remember that hours earlier the United States, together with British and French allies, launched airstrikes against Syrian military targets. The strikes came in retaliation for a suspected chemical attack by the regime of President Bashar al-Assad near Damascus, only 135 miles away.

When asked about the conflict—which by the end of the day would force President Nelson and Elder Holland, of the Quorum of the Twelve Apostles, to cut short their time here—the leaders spoke with confidence.

This land, considered sacred to Jews, Christians, and Muslims, creates a paradox, explained President Nelson. There is “contention and competition” in the very place the Savior taught “love one another as I have loved you” (see John 13:34).

“Everyone has challenges in the world. That is why we are here,” said President Nelson. “This part of the world has always been contested. … But whether you live here or anywhere else in the world, there are going to be challenges. That’s why the gospel of Jesus Christ is so very important. Because it will help fortify an individual to face whatever challenges he has in life.”

These times of rising conflicts make the message of Jesus Christ to all God’s children more important than ever, he added. 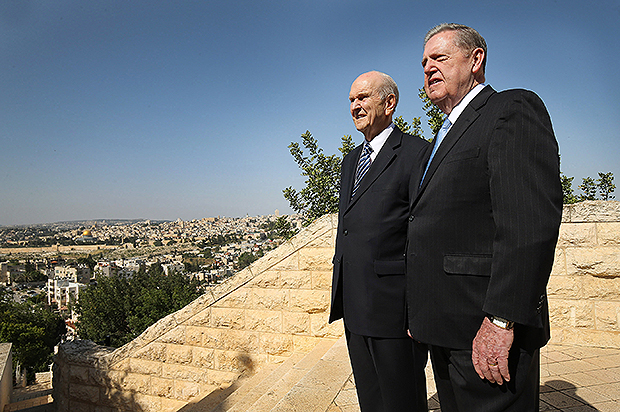 Jerusalem was the central location of President Nelson’s global ministry tour, which began April 10 and will conclude April 23. After visiting London, England, and Jerusalem, President Nelson—accompanied by his wife, Sister Wendy Nelson, and Elder Holland and his wife, Sister Patricia Holland—visited Kenya and Zimbabwe and will also visit India, Thailand, Hong Kong, and Hawaii.

Due to rapidly diminishing available airspace, the group determined to forgo visits to the Western Wall, the Garden Tomb, and the Sea of Galilee. President Nelson left Jerusalem with plans to commence the Africa portion of his tour sooner than expected. (See related story.)

Students at the Church’s BYU Jerusalem Center, who were excited to welcome a prophet to the eight-level building set on five acres on Mount Scopus—and more excited at the anticipation to sit at his feet on the shore of the Sea of Galilee—spoke little about the conflict or the change in President Nelson’s schedule. They will remain at the center and continue their studies.

Holly Castleton, 22, a BYU Jerusalem Center student from Mesa, Arizona, said she finds great significance in the fact that President Nelson came to this place that is “so familiar” to the Savior. “President Nelson is the mouthpiece of the Lord,” and this is the place “where it all started,” she said.

Cassidy Heaton, 24, a BYU Jerusalem Center student from Ogden, Utah, called it historic to have President Nelson and Elder Holland in the Holy Land.

“This is where it all happened. The most important person to ever live on the earth … lived here and died here and was resurrected here,” she said. While he did not preach from the Sea of Galilee, President Nelson continues Jesus Christ’s ministry in the Holy City, she said. 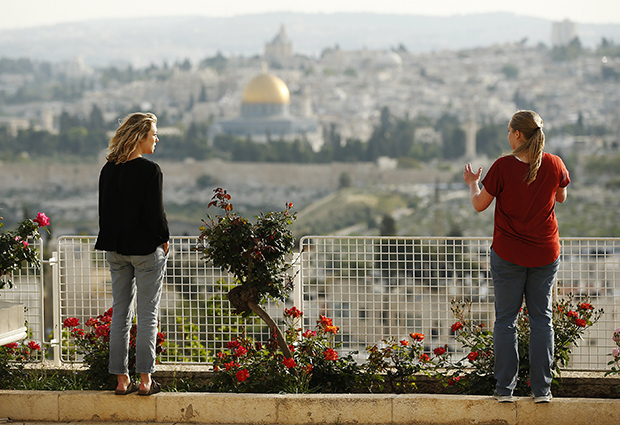 Cassidy Heaton and Chelsea Neubert, students at the BYU Jerusalem Center, look over the view of the Old City in Jerusalem. Photo by Jeffrey D. Allred, Deseret News.

Elder Holland first visited Jerusalem in 1972 and has returned so many times since that Jerusalem “now feels like home” because “the rich, powerful influence of this land is palpable.” He said the Church would never put President Nelson, those traveling with him, or students at the BYU Jerusalem Center at risk.

“We face this week what we have faced many, many times here, some difficulty in the region,” he added. “We are always very, very conservative. We are very safe.”

Jerusalem is a city brimming with hurried activity. The market in the Old City smells of fresh bread and za’atar, a fragrant seasoning made of sesame seeds, thyme, salt and sumac. Women sit on ancient cobblestone streets and sell grape leaves, sage, and parsley.

The city bustles as some answer the “Call to Prayer” and others follow the “Stations of the Cross.” Many here begin their day praying and touching the sacred Western Wall, while thousands more visit the Temple Mount, Dome of the Rock, or the Church of the Holy Sepulchre.

The walls surrounding the Old City were built almost 500 years ago, yet the markets inside those walls also bear the signs of a modern era, including air conditioning ductwork and armed guards.

Elder Holland said President Nelson “decisively and instantly” determined that his first major gesture beyond LDS Church headquarters would be a visit to Jerusalem.

“He wanted to walk where the Savior walked and stand where prophets have stood and feel what we all feel here,” said Elder Holland. 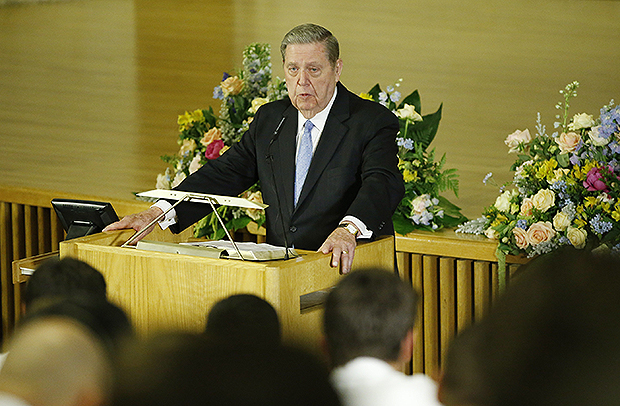 President Nelson said he had symbolic reasons for planning the global trip as he did.

“We wanted to start in Jerusalem to fortify ourselves with the message of the Lord Jesus Christ right from its very inception, here where He was born, where He lived, where He ministered, and where He was crucified,” President Nelson said. “His message is for all of God’s children.”

“Living in Israel is tough,” she said. “You are always on your toes.”

John Rey Bautista of Tel Aviv added, “It is a great privilege to be here in Israel and see the living prophet speak to us.”

Both Bautista and Zaionce attend a small branch so diverse that it is not uncommon to see testimonies translated and then translated again to reach a common language.

President Nelson told the members that words couldn’t express his gratitude to be in Jerusalem and “feel of your faith. It is a special joy for us,” he said. 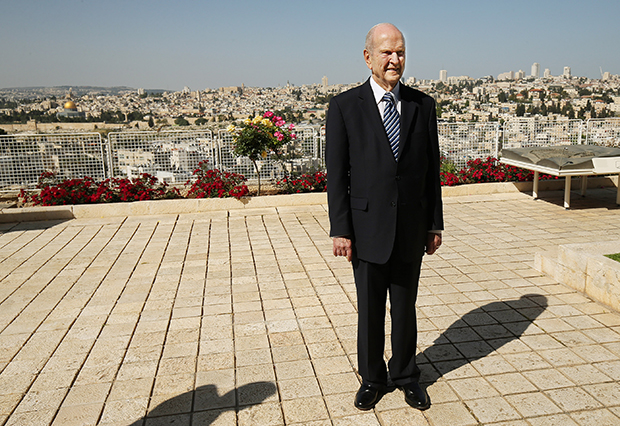 “You don’t have to come to a scene, a setting, to appreciate the Savior or the prophets or the events. You could do that in the privacy of a missionary apartment in South America or Asia, or you could do it in a Primary class in Eastern Europe,” said Elder Holland. “But to add to the privilege of being in the land that [the Savior] loved and on the soil that He walked, it really is a magnificent personal experience and I will never grow tired of that.”

President Nelson said he is looking forward to sharing his witness of the Savior as he continues his global ministry tour and outreach with a worldwide Church.

“The message is the same wherever I go,” said President Nelson. “We invite all of God’s children to come unto their Savior and receive His blessings that are available in the holy temple and have enduring joy and qualify for eternal life with their Father in Heaven.”

“The gospel of Jesus Christ is so very important because it will help fortify an individual to face whatever challenges he has in life,” said President Russell M. Nelson. Photo by Jeffrey D. Allred, Deseret News. 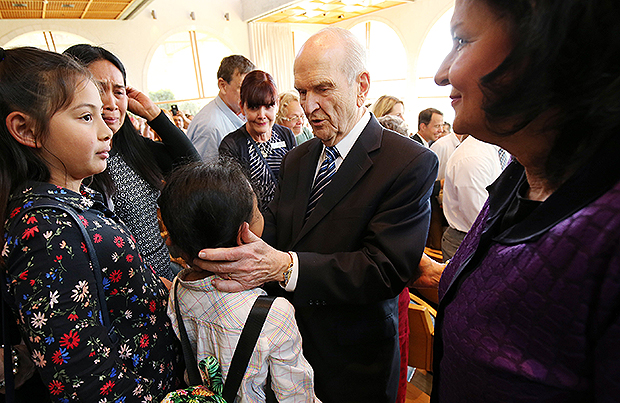 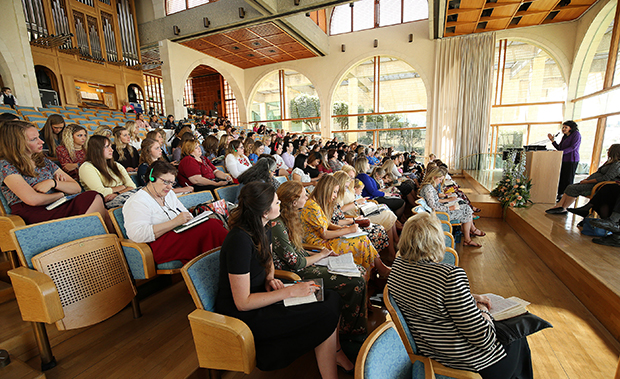 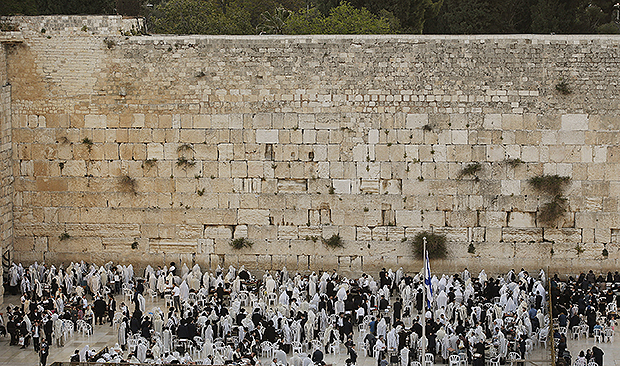 Worshippers gather at the Western Wall in the Old City in Jerusalem. Photo by Jeffrey D. Allred, Deseret News. 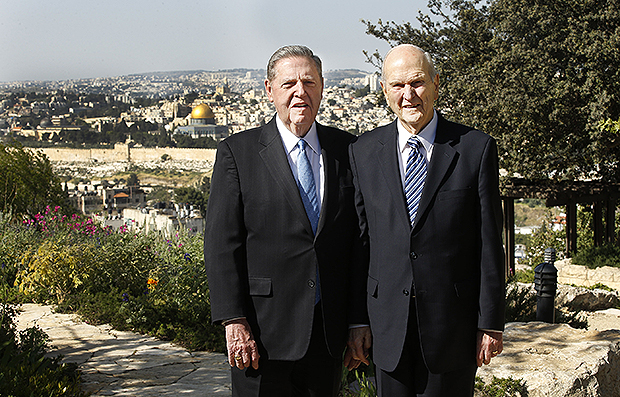 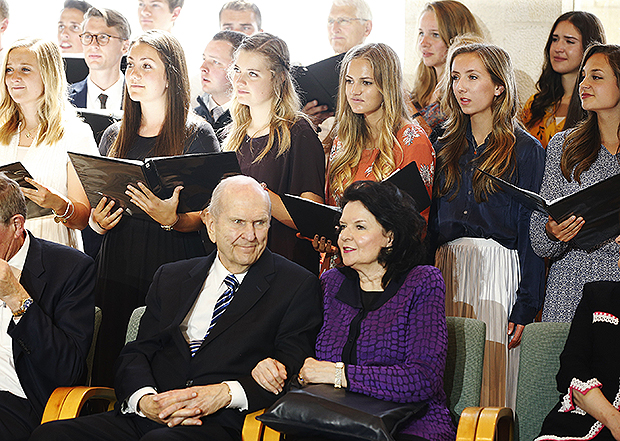 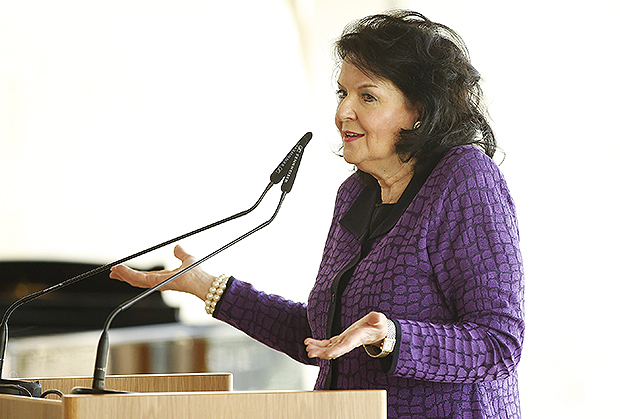