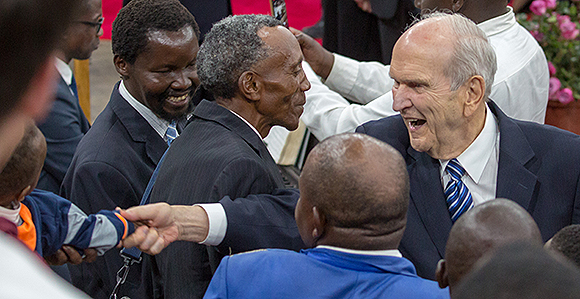 President Russell M. Nelson reaches out to shake the hand of a young Latter-day Saint in Nairobi, Kenya, during his world tour.

“Our message to the world is that Jesus is the Christ and that His way of life is the way of joy and happiness not only in this life but in the life ahead,” said President Russell M. Nelson as he arrived in Nairobi, Kenya’s capital city, Monday, April 16, 2018.

President Nelson, his wife, Wendy, and Elder Jeffrey R. Holland of the Quorum of the Twelve Apostles and his wife, Patricia, flew to Africa following a visit to Jerusalem during their global ministry tour of three continents.

Kenya, home to nearly 14,000 Latter-day Saints and a future temple, is President Nelson’s third destination on his worldwide tour to cities in Europe, Africa, Asia and Hawaii. The tour began in London, England, Thursday, April 12.

This is the new president’s first official trip outside of the United States since he was named the Church’s 17th prophet in January.

“You perhaps don't think of yourself as pioneers, but you're just as much pioneers here now as Brigham Young and his associates were following the martyrdom of the Prophet Joseph Smith in the 1800s,” said President Nelson. He spoke to Latter-day Saints and invited guests at a meeting that was broadcast to congregations throughout Kenya.

“Membership in the continent of Africa is about the same as it was for the whole Church in the year I was a boy,” he added.

Those in attendance included civic, government, business, and academic leaders, as well as media. 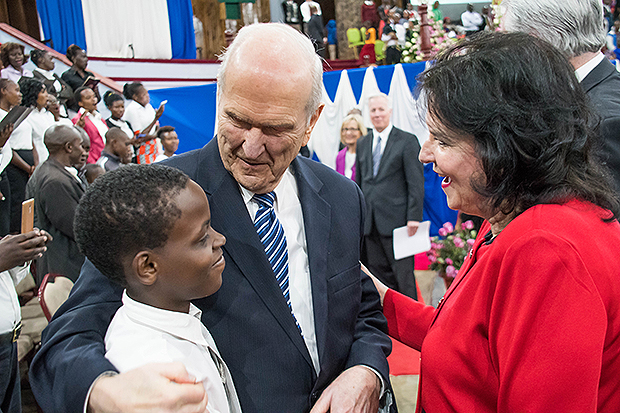 The first African Latter-day Saints in Kenya were baptized in 1979. The first two missionaries, Elder Farrell McGhie and his wife, Sister Blanch McGhie, arrived in 1980, and in 1981 two branches were created in Nairobi and Kiboko. The Church received official recognition in 1991, and that same year missionary headquarters were established in Nairobi. The first Latter-day Saint stake was created in 2001, and former Church President Thomas S. Monson (1927–2018) announced that a Church temple will be built in Nairobi.

“I think you've prayed a temple here,” said Elder Holland. “The announcement has been made and the work is yet to be done, but I'm sure it was your faith and your devotion that the Lord would smile on you.”

Elder Holland encouraged the congregation to gather their family history in anticipation of the new temple. “It will be a while before it's up, but plan to attend when you can; plan to make that a highlight of your life as often as circumstances and finances and transportation will allow. Nothing will bless you more.”

“Today is a great day to have the prophet be with us,” said Solomon Luvai of Nairobi, who has been a member of the Church since 1994. “You know, most of the time we just see him in pictures and on tapes, but this time it's still a great day to see him face to face.”

“It's never occurred to me in my wildest dream that I would be able to be even near the prophet, considering that I'm in Kenya,” explained Mercy Makau, who joined the Church a dozen years ago. She was excited to have President Nelson visit her home and meet her children.

“You're so kind to invite us into your home,” said President Nelson as he arrived at the Makau household with his wife and the Hollands. “We brought a photograph of the new First Presidency for your home.”

The global ministry tour runs April 10–23, 2018. The senior Church leaders are visiting eight cities in 11 days in Europe, Africa and Asia. The next stop on the tour is Harare, Zimbabwe, where President Nelson will participate in a devotional meeting that will be broadcast to all members in that African country. Other destinations include Bengaluru, India; Bangkok, Thailand; Hong Kong, China; and Honolulu, Hawaii, United States.

Church membership is growing in Africa, where there are about 540,000 Latter-day Saints.

The first African converts in Kenya were baptized in 1979. There are now more than 13,000 members in Kenya.

The Church has 159 temples worldwide with 30 others announced or under construction.

“I know with a temple being established in Kenya, we will have peace in Kenya. That would be my prayer,” shared Makau.

There are three operating temples in Africa (Aba, Nigeria; Accra, Ghana; and Johannesburg, South Africa), two under construction (Kinshasa, Democratic Republic of the Congo, and Durban, South Africa) and two more announced in addition to Nairobi (Abidjan, Ivory Coast, and Harare, Zimbabwe), for a total of eight temples in Africa. 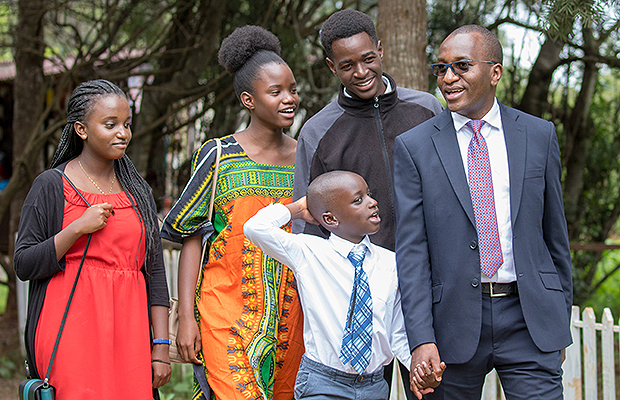 Mormons from in and around Nairobi, Kenya, attended a special meeting with President Russell M. Nelson on April 16, 2018. Wendy Watson Nelson, wife of President Nelson, attended and spoke at the meeting, as did Elder Jeffrey R. Holland of the Quorum of the Twelve Apostles and his wife, Patricia. 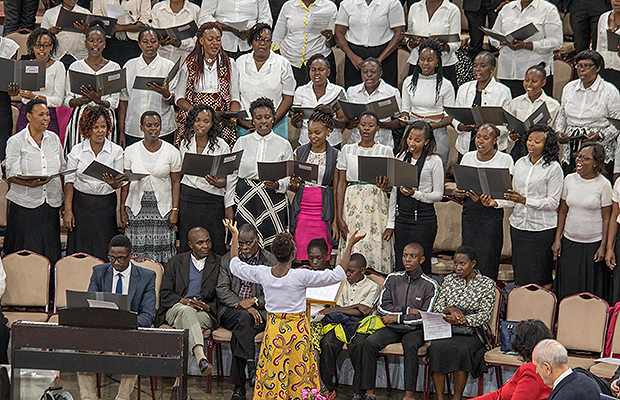 A choir of members of the Church in Nairobi, Kenya, provided sacred music for the visit and meeting of President Russell M. Nelson and Elder Jeffrey R. Holland April 16, 2018. Their wives, Wendy Watson Nelson and Patricia Holland, also attended and spoke.