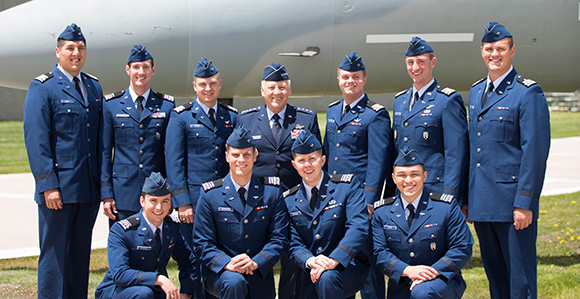 “The Lord expects you to be part of the world, just don’t be of the world.” — Elder Bruce A. Carlson, emeritus General Authority Seventy

The Latter-day Saint graduating class of 2019 at the United States Air Force Academy in Colorado Springs, Colorado, stood a little taller and were “at attention” as Elder Bruce A. Carlson, a retired four-star general and an emeritus General Authority Seventy, made his way around campus and addressed seniors, family, and friends at the fourth annual baccalaureate service on May 26.

A total of 16 graduates are Church members, including one female and three converts to the Church. After graduation on May 30, cadets will take a mandatory 60-day leave period and then continue their military careers with their first assignment to various bases across the United States, including California, Oklahoma, and Hawaii.

Elder Carlson fit right in with the men and women in blue due to his distinguished career in the Air Force. During a question-and-answer period with cadets on his two-day visit to the academy, they asked how many different planes the general has flown. Being a command pilot with more than 3,900 flying hours, he has flown ten different aircraft including the F-4, OV-10, A-10, F-111, and F-117. His favorite was the F-16 and he piloted the B-52 which impressed the cadets.

He said after taking a ride in the back seat of a T-33, he knew exactly what he was going to do with the rest of his life. “I wanted to be a fighter pilot. I hope you have that same feeling that I did when I got out of that jet. That changed my whole life from that moment on.”

Another question was asked on how to be a professional in the military and balance being a member of the Church. Elder Carlson said that this is what most young people ask. He said that all one needs is a testimony and a sense of humor. He said it’s important to keep one's testimony strong and sound and to love to laugh as Joseph Smith did.

“The Lord expects you to be part of the world, just don’t be of the world. Those challenges come any place you are,” he said.

After additional questions regarding marriage and family he concluded by saying, “There’s no more honorable, good and more positive upright thing you can do in your life than serve your country.”

The May 25 tour on campus began at the Aeronautics Laboratory where Richie Evans, C1C, introduced Elder Carlson to his capstone projects. A capstone project is two semesters’ worth of research that is conducted on an ongoing problem that needs a resolution. Evan’s projects were given the acronyms ETSCAT and IPSS. They addressed problems of finding a cheaper missile carrying system and a solution to providing supplies to isolated military personnel.

“There are a lot of things in this engineering program that are pretty remarkable,” said Elder Carlson.

After climbing into a glider and an introduction by Latter-day Saint cadet Julia Pack on how the controls work, Elder Carlson said, “This I would love to do.”

Elder Carlson began his address at the Baccalaureate Service by expressing his excitement to be with the cadets and letting them know that the education they have received is second to none.

“I hope you know how fortunate you’ve been to take part of this marvelous institution because it is a model unlike any in the world,” he said.

Elder Carlson reflected on his own graduation and how it was back in the day of being filmed in black and white and how today the cadets will not be walking into a sensible world. But how it is a world of cynics and a world of abuse amongst friends, neighbors, and spouses, and how Americans are as angry as they have ever been.

He spoke of the ancient apostle Paul writing to Timothy on how, “In the latter days some shall depart from the faith.”

Elder Carlson shared a list of advice for the cadets as they leave school and start to walk the covenant path.

His said to first, do the right thing and avoid that which is wrong by a mile. Second, have a positive attitude, and don’t spend a lot of time telling others about one's problems.

Other advice included committing to what one has signed up to do and don’t complain, but instead just work to fix it and at least one's little part of it.

He encouraged community service by quoting Dr. Martin Luther King in saying, “Everyone can be great because everyone can serve.”

He reminded the cadets to always be courteous and to take care of themselves emotionally, spiritually, physically, and mentally.

Elder Carlson said to keep it simple as Albert Einstein had done with one simple equation, the theory of relativity.

He said that happiness may be found by playing a round of golf for an hour or going on a cruise for a week, but a lifetime of happiness is found by, “putting your faith in the Lord and Savior Jesus Christ.”

He closed with a solemn testimony of Jesus Christ and acknowledged the pains that He suffered, and encouraged the seniors to participate in regular, purposeful prayer, scripture study, and temple attendance.

“My young friends, it is now all in your hands,” Elder Carlson said.

Richie Evans, C1C and a convert to the Church, said he was impressed by Elder Carlson’s words because, “he was able to maintain his faith while excelling in a military capacity. You don’t have to choose one over the other and that’s very important to me.”

Evans also enjoyed the service because “Elder Carlson said to always be in control of yourself and that is often times the mark of a very good Air Force officer.”

Evans was baptized three years ago after circumstances on a plane ride home from Buffalo, New York. He chose to sit by a couple from Denver, Colorado, and they started talking about the Church. He went to New York to attend the wake and funeral of a friend who was killed in a car accident.

The couple he sat by happen to be a stake president and his wife from the Highlands Ranch area who had been praying to have a missionary experience.

“I knew it wasn’t a coincidence,” said Evans about sitting next to them on the ride home.

Evans will marry his fiancé in the Denver Colorado Temple on May 31 and continue his education and military career in graduate school at the University of Hawaii. 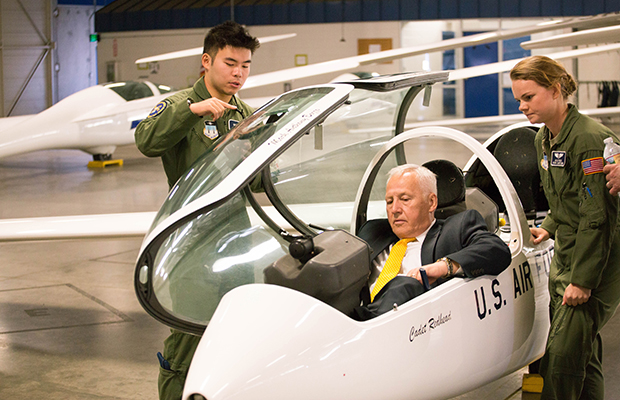