A rendering of the Moses Lake Washington Temple.

Exterior renderings showing the planned design for three temples in the western United States were released by the Church on Tuesday morning, April 7. Groundbreaking dates have not been set yet.

The Moses Lake Washington Temple will be built on a 17-acre site located on Yonezawa Blvd between Division Street and Rd K NE. The single-story temple will be approximately 20,000 square feet with a center spire.

The Moses Lake temple—announced by President Russell M. Nelson in the April 2019 general conference—will be the fourth temple in Washington state. The others are in Richland, Seattle, and Spokane.

Following the announcement, Mitchell J. Heaps, first counselor in the Moses Lake Washington Stake presidency, told the Church News that the rural farming community has hoped for the temple for a long time.

“We have a legacy of Saints in the area,” Heaps said. “They came in the 1950s to settle the area with the Grand Coulee Dam nearby. … [The temple announcement] shows that our Father in Heaven trusts us to carry the work forward here in eastern Washington.”

Utah currently has 17 operating temples. This past weekend, President Nelson announced a temple in Syracuse. Temples have also been announced in Orem, Layton, and Taylorsville, and a temple in Saratoga Springs is currently under construction.

Plans for the Tooele Valley Utah Temple call for a three-story edifice of approximately 70,000 square feet. The temple will be located northwest of the intersection of Erda Way and Highway 36 in Erda, Utah. President Nelson announced the temple during the April 2019 general conference.

Following the announcement of the temple, President Todd C. Thompson of the Tooele Utah Stake told the Church News that Latter-day Saints in the area have long prayed for a temple. Tooele has seen dramatic growth in recent decades.

“This is something we’ve been hoping for but knowing it might not happen in our lifetimes,” said President Thompson. “We were trying to just be patient and humble, and we’re grateful that the Lord is answering those prayers.” 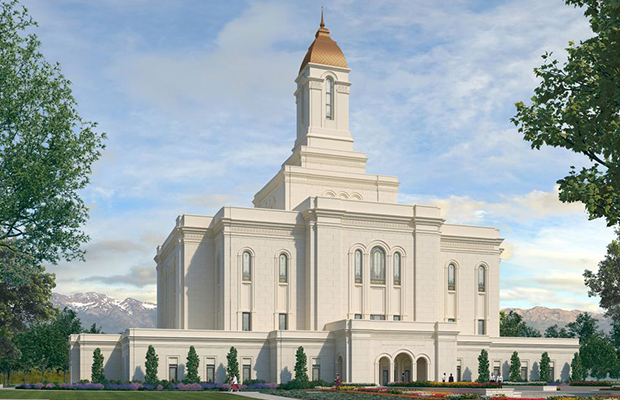 A rendering of the Tooele Valley Utah Temple.

The Washington County Utah Temple will also be three stories. The 90,000-square-foot temple will be built on a 14-acre site located northeast of 3000 East 1580 South in St. George, Utah.

The temple will be the city’s second temple. The St. George Utah Temple closed in November 2019 for extensive renovation and is expected to reopen sometime in 2022. The Washington County temple was announced by President Nelson in the October 2018 general conference.

“Many people are moving here,” said President Daniel K. Frei, Santa Clara Utah Stake president, when the Washington County temple was announced. “We do have a temple, but only so much work can be done, and a lot of temple work is being done. We are already at capacity.”

He added: “This will provide an opportunity for more Church members to serve in the temple. It is also an indication of the Lord’s confidence in the people who live in the area. We will need to staff the new temple and do the work—it creates more opportunity for us to serve.”