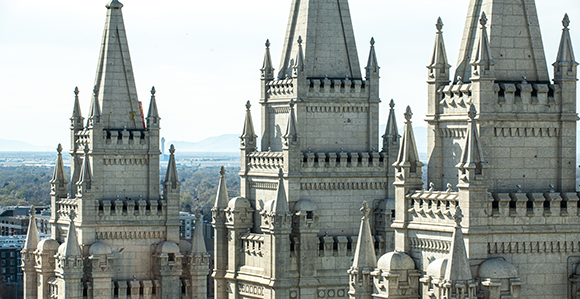 The Salt Lake Temple on April 5, 2020. The temple is currently closed for renovation.

At the conclusion of a general conference already rich with historic moments, President Russell M. Nelson delivered happy news: eight new temples would be built in nations across the globe.

New temples will be built in:

President Nelson acknowledged that “it may seem odd to announce new temples when all our temples are closed for a while.”

But more than a century ago, one of President Nelson’s predecessors, President Wilford Woodruff, “foresaw conditions such as ours” in his dedicatory prayer of the Salt Lake Temple in 1893:

“When Thy people shall not have the opportunity of entering this holy house … and they are oppressed and in trouble, surrounded by difficulties … and shall turn their faces towards this Thy holy house and ask Thee for deliverance, for help, for Thy power to be extended in their behalf, we beseech Thee, to look down from Thy holy habitation in mercy … and listen to their cries.

“Or when the children of Thy people, in years to come, shall be separated, through any cause, from this place, … and they shall cry unto Thee from the depths of their affliction and sorrow to extend relief and deliverance to them, we humbly entreat Thee to … hearken to their cries, and grant unto them the blessings for which they ask.”

President Nelson reminded his vast audience Sunday afternoon that even during times “of our distress when temples are closed,” Latter-day Saints can still draw upon the power of their temple covenants and endowment.

The Church president declared that the eight newly announced temples will bless the lives of many people on both sides of the veil of death.

“Temples are a crowning part of the Restoration of the fulness of the gospel of Jesus Christ,” he said. “In God’s goodness and generosity, He is bringing the blessings of the temple closer to His children everywhere.

“As the Restoration continues, I know that God will continue to reveal many great and important things pertaining to His kingdom here on earth. That kingdom is The Church of Jesus Christ of Latter-day Saints.”

President Nelson’s new temple announcements Sunday surely come as joyful news to temple-lovers across the globe who are, temporarily, unable to worship in such sacred edifices.

On March 25, the First Presidency announced the closure of all the Church’s temples during the ongoing coronavirus pandemic.

“After careful and prayerful consideration, and with a desire to be responsible global citizens, we have decided to suspend all temple activity Churchwide at the end of the day on March 25, 2020,” wrote the Church leaders in a letter with the same date. “This is a temporary adjustment, and we look forward to the day when the temples will reopen.”

At the time of the March 25 announcement, the Church had already closed 111 temples. The remainder of the 168 operating Latter-day Saint temples—located mostly in North America—were open for limited hours to provide living sealing, initiatory and endowment ordinances.

The First Presidency announced on May 6, 2019, that the Church had discontinued a policy requiring couples who marry civilly to wait one year before being married or sealed in the temple. The change means Latter-day Saint couples whose temple-marriage plans will now be disrupted by temple closures could marry civilly and then have a temple marriage as soon as temples reopen.

In a letter dated Friday, March 13, announcing temporary adjustments to temple work, the First Presidency and Quorum of the Twelve Apostles wrote that they “look forward with great anticipation to the time when temples can again operate at full capacity and extend the blessings of temple work to members and their ancestors.”