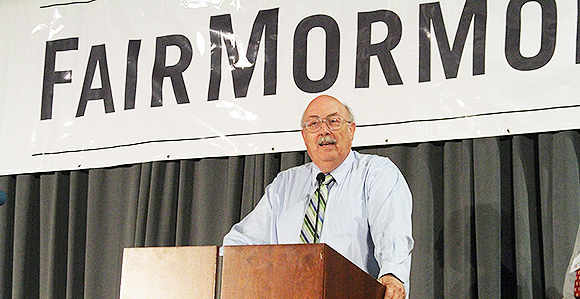 Daniel C. Peterson speaks at the FairMormon Conference on the subject of religious faith and the difference it makes on August 4, 2017. Photo by R. Scott Lloyd.

“Churches are almost the only element in society to have offered considerate, caring, long-lasting, and self-sacrificing support to the mentally ill.” —Andrew Sims, professor of psychiatry, University of Leeds

Many years ago, Daniel C. Peterson corresponded with a young returned LDS missionary who denounced the Church for allegedly lying about its history and Peterson for his alleged role in defending the lies.

“I tried to persuade him that he was wrong,” Peterson said in his August 4 address at the FairMormon Conference. “He remained hostile, and it was easy to see that he was deeply troubled.”

At length, the man’s messages stopped abruptly and, upon investigation, Peterson learned to his horror that the correspondent had killed himself with a shotgun.

“Now, I don’t know exactly what went into this young man’s decision to end his life and do it in such a horrible way,” Peterson said. “There may have been—there probably were—many factors involved. But I’m reasonably confident that his loss of faith and his bitter alienation from the Church contributed.”

A return to faith

Peterson, a professor of Arabic and Islamic studies at Brigham Young University, is a popular and prolific—though often reviled—defender of Mormonism in speeches and writings. Customarily, he is the concluding speaker at the annual two-day conference of FairMormon, an organization not affiliated with the Church but dedicated to defending it against public criticism.

Recognizing the value of professional counseling in helping people deal with emotional and psychological turmoil caused by disillusionment and loss of faith, he said there is an even more fundamental cure: “a return to faith and trust.”

Not an illness but a cure

Peterson’s presentation, titled “What Difference Does It Make?” was replete with statistics and quotations from scholars rebutting contentions that religious people are by definition sick or mentally ill and that atheism is healthier than faith.

And it’s not just the social support associated with religious worship that makes the difference; that accounted for only about 20–30 percent of the measured results, Peterson noted.

“Of course, none of this proves religious claims are true,” he acknowledged. “But it does strongly suggest that faith isn’t an illness.”

Citing a 2009 book by Andrew Sims, professor of psychiatry at the University of Leeds in England, Peterson argued that religious belief contributes substantially to overall well-being.

He quoted Sims as writing that its effect on mental and physical health is “one of the best-kept secrets in psychiatry, and medicine generally. If the findings of the huge volume of research on this topic had gone in the opposite direction and it had been found that religion damages your mental health, it would have been front-page news in every newspaper in the land!”

Peterson further quoted Sims as contending that “churches are almost the only element in society to have offered considerate, caring, long-lasting, and self-sacrificing support to the mentally ill,” resulting in a better outcome from a range of physical and mental illnesses.

Peterson remarked, “An advocate of greater secularism might concede that religious fantasies provide a helpful crutch for stupid, ignorant, and/or irrational people, whereas better educated and more honest unbelievers face reality without such comfort.”

However, a 2004 study showed that religious adults were a third less likely than secular adults to lack a high school diploma and a third more likely to have at least one college degree, Peterson said.

“Secularizing writers often like to imagine how much better the world would be without religion,” he said. “They should pray that they don’t get their wish.”

It makes a difference

Noting that Western society has grown much more secular in recent decades, Peterson warned that this is likely to have consequences. “It makes a difference.”

Though nonreligious people have long assured him that they are devoted to making life in the world better for everyone, Peterson wonders what evidence there is to demonstrate that.

He cited a 2006 book by Arthur Brooks, who found in his studies that religious people are more likely to donate money and in larger amounts to charities, to donate blood, to give to homeless shelters, to return money from a cashier’s mistake, and to express empathy for the less fortunate.

Peterson quoted an atheist who wrote to him, “If you live in this very moment, you’ll find happiness.”

Yet, Peterson said, “life ‘in this moment’ can be hellish” for many people.

Another issue, he said, is that “human potential is never fully realized in mortality. Too often, in fact, it is scarcely realized at all.”

“Perhaps a skeptic might say there’s no purpose to the cosmos. … We live briefly, we die meaninglessly, and then our little candle is extinguished—as all light and life ultimately will be extinguished in the vast heat-death of the universe.

“But it should certainly cause us to hope for a future in which wounds are healed, deep yearnings satisfied, and human potential fully realized. Fortunately, in the Resurrection of Christ and the Restoration of the gospel there’s a firm foundation for that hope.”