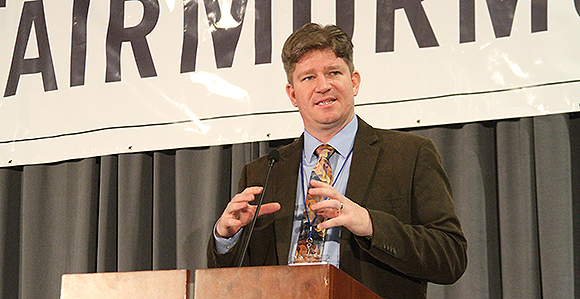 Keith A. Erekson, director of the Church History Library, speaks at the FairMormon Conference about the Book of Mormon witnesses and skills for understanding history on August 3, 2017. Photo by R. Scott Lloyd.

As the director of the Church History Library, Keith A. Erekson has charge, among other things, of manuscript records pertaining to the Three Witnesses and the Eight Witnesses to the Book of Mormon.

“But we also happen to have the world’s largest anti-Mormon collection,” Erekson quipped as he spoke Thursday, August 3, at the annual FairMormon Conference. That’s because of Doctrine and Covenants 123, he said, which counseled the early Saints to “to gather up libelous publications, magazines, encyclopedias, histories.”

“That’s a practice we’ve continued into the 21st century,” Erekson said at the conference, which convened at the Utah Valley Convention Center. “In those materials the witnesses come under quite a bit of scrutiny.”

Dealing with such criticisms falls under the province of FairMormon, which is not affiliated with the Church but, according to its mission statement, is dedicated to using scholarship, scripture, doctrine, historical literature, and logic to address criticisms leveled at the Church.

In his address, Erekson examined accounts of the witnesses, both favorable and antagonistic.

“Along the way, I hope to demonstrate and articulate some history skills that you can use to strengthen your study and your discipleship,” he said. “I also hope we can expand our view of witnesses and witnessing as we do this.”

One of the history skills Erekson shared was to examine sources. He cited an excerpt from the book No Man Knows My History by Fawn Brodie, a famous critic of Mormonism and Joseph Smith. Brodie cited an article from the newspaper The Palmyra Reflector, which indicated that Book of Mormon witness David Whitmer had spoken to the newspaper editor.

Erekson said that as Church History Library director he has convenient access to that issue of the Reflector in the library’s archives, so he looked up that article. It had a reference to an “informant” between David Whitmer and the editor.

“Many of the pieces in the Reflector were satirical,” Erekson said. “This device of having the shadowy ‘informant’ who may or may not remember everything particularly works well in satire, because you tell a story, you attribute it somewhere fuzzy, and then you’re off.”

Erekson recommended the book Investigating the Book of Mormon Witnesses by Richard Lloyd Anderson as “the single best study of the witnesses and their testimony.“ From the book, he quoted one of Anderson’s conclusions: “A main safeguard exists for testing claims that a witness modified his testimony—be sure that all statements come from the witness himself.”

Collectively, the witnesses have provided more than 200 first-person accounts of their experience and testimony, Erekson said.

Another “history skill” that Erekson recommended is to closely read multiple accounts of the Book of Mormon witnesses, analyze them, and corroborate details.

“One of the things you want to do is expect citations,” he said. “There are publishers who will publish things without citations. That’s the first the sign: If they don’t even care enough to tell you where they found their historical information, don’t worry about spending the time to figure out if they’ve made it up or if they haven’t.”

“Every time Joseph was asked how he translated the plates, this is the type of language he used,” Erekson said.

It is important to note, he said, that the phrase lacks the trappings of affidavits or other legal documents. Thus, another skill, he said, is to ask questions and make comparisons about what is or is not present in writings concerning the witnesses.

“That leads us to one of the most important skills we need when we understand anything from history: avoid present assumptions,” he said.

Another such present assumption modern-day readers “inflict upon the past” is that phrases such as “by the power of God” mean that the witnesses did not see the physical plates with their own eyes, but rather, beheld them in vision.

It is a false dichotomy, he said, to assume that it was either by physical sight or by spiritual vision; it could be both.

Citing Ether 5:2, Erekson said the witnesses were referred to as “those who shall assist to bring forth this work.” The witnesses assisted in many ways, he pointed out, including sharing the burden with Joseph Smith of testifying to the truthfulness of the Book of Mormon account.

Mary Whitmer, who was visited by the angel Moroni and shown the plates, assisted by keeping house, milking cows, and caring for guests while men in the household brought forth the Book of Mormon.

“The men were given a witness to share with the world; Mary was given a witness to strengthen her personal faith,” Erekson commented. “Clearly, Moroni, who understood a thing or two about loneliness, had a larger view of what it means to assist in this work.”

Doctrine and Covenants 5 talks about the testimony of the witnesses going forth to the world and promises their testimony will be followed by a spiritual manifestation to those who ask for it, Erekson noted.

“This manifestation is a kind of reinforcement,” he said.

Thus a final item in Erekson’s “history skills” list is to combine the best historical and spiritual evidence.

“So, if you were to pick up something now that was critical of the witnesses—whether it was the Palmyra Reflector or Fawn Brodie, or something more recent on the internet—these skills will help you,” he said.

In summation, the skills are reading closely, following the sources, asking questions, being wary of “present assumptions,” changing “either/or” to “and,” and combining the best historical and spiritual evidence. 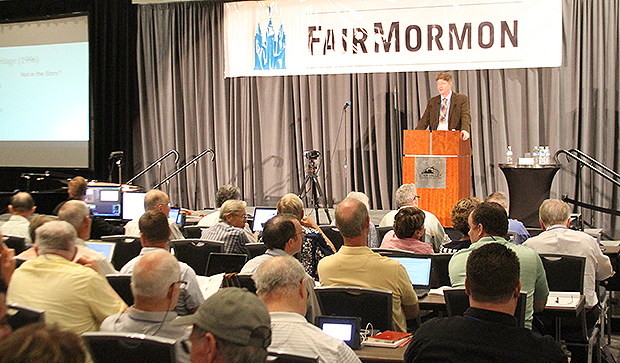 Keith A. Erekson, director of the Church History Library, speaks at the FairMormon Conference about the Book of Mormon witnesses August 3, 2017. Photo by R. Scott Lloyd.