President Nelson Teaches Importance of the Temple in Thailand 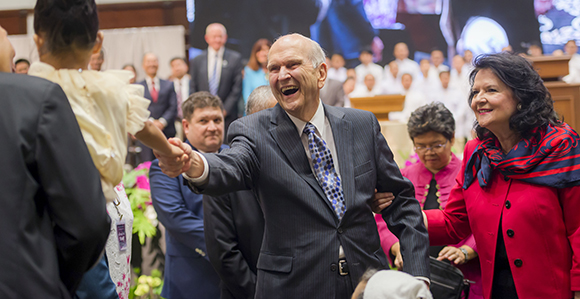 President Russell M. Nelson shakes the hand of a young girl during a gathering in Bangkok, Thailand, Friday, April 20, 2018.

“The future for the Church is bright here in Asia,” said President Russell M. Nelson as he met with members in Bangkok, Thailand, Friday, April 20, 2018, the sixth stop on his eight-city global ministry tour. The Latter-day Saint prophet was in Asia following visits to Europe and Africa.

President Nelson’s mention of the future was in part a reference to a visit he made this week to the site of a recently announced temple to be built in Bangkok. For the second day in a row, his remarks during his visit to Asia emphasized Church growth and temple blessings. “My goodness, if there’s anything that’s been impressed on my mind [it] is to see what great transformation has come in the more than 50 years that I’ve been in and out of Asia,” said President Nelson, who first visited Thailand as a medical doctor in 1966.

“My desires for the people of Thailand [are] the same as my desires for people of Taiwan or any other city [or] country. We invite all of God’s children … to come unto the Savior and enjoy the blessings and benefits of their temple and have everlasting life [and] joy,” he said.

President Nelson’s wife, Wendy, and Elder Jeffrey R. Holland of the Quorum of the Twelve Apostles and his wife, Patricia, are traveling with the prophet on the worldwide tour.

“Just think of how ancient the activities of temple are. … We have temple work documented from the time of Adam … in the Old Testament and New Testament times and in the ancient history of the Book of Mormon people,” he said.

The Church has 159 temples worldwide, with 30 others announced or under construction, including a temple in Bangkok announced by President Thomas S. Monson in April 2015.

Church leaders estimate that the meeting in Bangkok was the largest gathering of Saints in the history of the faith in Thailand.

“I wish that every missionary who has ever served in Thailand could be here tonight, especially those in the early years when there were virtually no members and little tiny branches, very few who really knew the language,” expressed Elder Holland. “And now this, with a broadcast in Laos and Myanmar—the miracle of the gospel of Jesus Christ. You are a stunning sight.”

The attendees were excited to be able to see and hear the prophet. Xien Liu of Bangkok said, “Because it’s the first time the prophet came here it’s really good to witness by ourselves that he is a prophet. We only see him on TV or on videos, but to actually see a real prophet who has been called and in person, it is really great.”

President Nelson encouraged the members in Thailand to prepare themselves and their families to attend the temple. “I bless you with love at home, success in your work, and joy in your hearts as you prepare for the temple of the Lord here in this sacred country,” he concluded.

“Ever since I was little, I have dreamt of having the temple in Thailand. And I think that is something that is very special to my family,” said Wichada Tzanis of Bangkok. Another member, Isayah Rittikupt added, “[The] Thai people will have a good life when Thailand has a temple. And I feel thank you [to] God and [the] president to come to Thailand.” 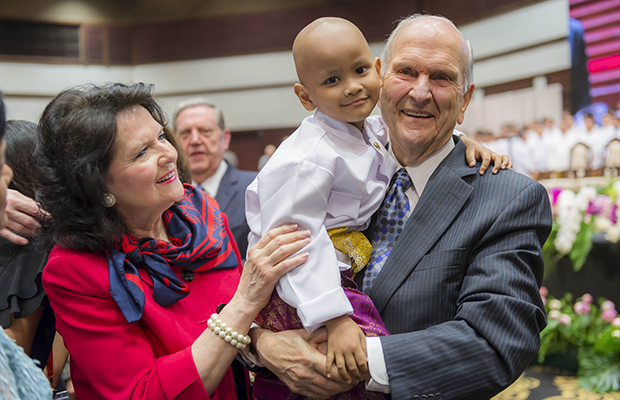 President Russell M. Nelson holds a child with his wife, Wendy, by his side in Bangkok, Thailand, Friday, April 20, 2018.

There are nearly 1.2 million Latter-day Saints in Asia.

Regular worship services were authorized in Thailand in 1961. In November 1966, President Gordon B. Hinckley dedicated the country for the preaching of the gospel. More than 22,000 Latter-day Saints in 41 congregations live in Thailand.

The tour began in the United Kingdom with a stop in London on April 12. Other cities have included Jerusalem, Israel; Nairobi, Kenya; Harare, Zimbabwe; and Bengaluru, India.

The next stop on the tour was Hong Kong, China. The tour concluded with a stop in Honolulu, Hawaii, United States. 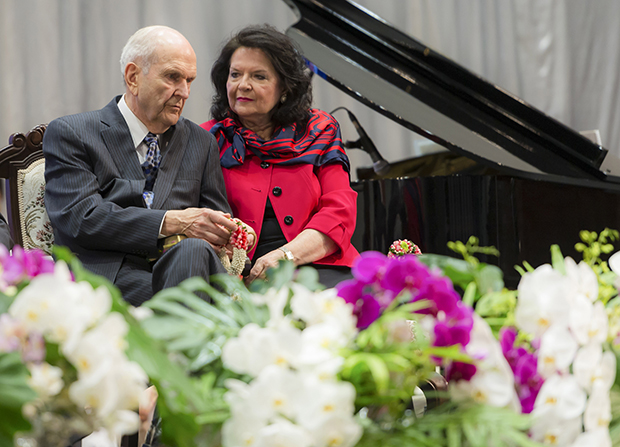 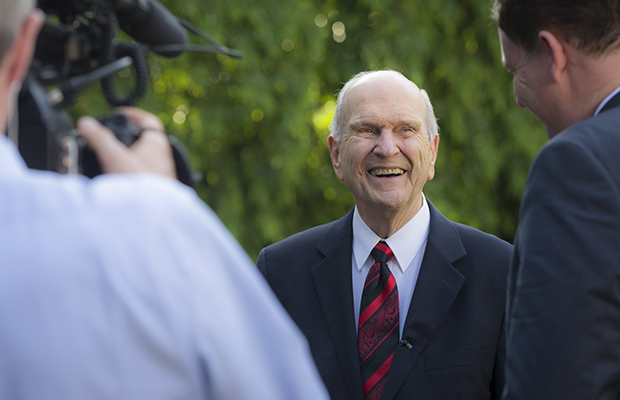 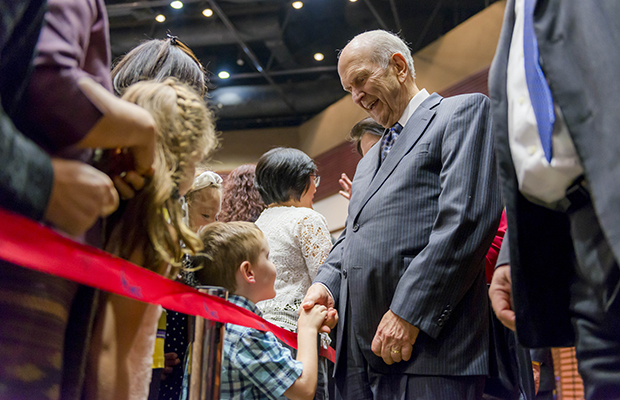