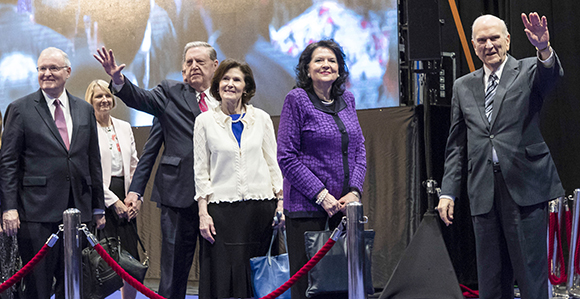 “Everything we do in the Church is to make life better for other people, to bring them joy. And how do you do that? By building strong families.” —President Russell M. Nelson

The Church of Jesus Christ of Latter-day Saints invites all people “to come unto their Savior, to be blessed by the ordinances of the temple, and have enduring joy and qualify for that greatest of all blessings—that of eternal life,” said President Russell M. Nelson. These comments were made as he concluded his visit to Asia Saturday, April 21, 2018.

The prophet spoke to some 4,000 members in Hong Kong, the seventh location on his eight-city global ministry tour. President Nelson was in Bengaluru, India, on Thursday, April 19, and Bangkok, Thailand, on Friday. The final stop on the tour is Honolulu, Hawaii, United States.

President Nelson’s wife, Wendy, and Elder Jeffrey R. Holland of the Quorum of the Twelve Apostles and his wife, Patricia, are traveling with the prophet on the worldwide tour to eight cities in 11 days on the continents of Europe, Africa, and Asia.

In his remarks to Latter-day Saints, President Nelson, a former surgeon and medical researcher, spoke of the wonder of the human body, as well as the importance of education, prayer, tithing, family, and worship in temples.

“Everything we do in the Church is to make life better for other people, to bring them joy,” President Nelson said. “And how do you do that? By building strong families. Those families are made stronger because of covenants made in the holy temples.”

Prior to President Nelson’s remarks, Elder Holland taught the gathered Saints about Joseph Smith’s 1839 Liberty Jail experience—one of the most difficult periods of Joseph’s life but one that yielded some of the Church’s choicest and most comforting passages of scripture.

“God can turn every disadvantage to your opportunity and your advantage,” Elder Holland said. “Whatever the difficulty, whatever the heartache, whatever the deprivation, if we seek our Father in Heaven, He can turn that setting and that moment into divine instruction.”

Such instruction comes more readily in the Church’s temples, Elder Holland added. Like President Nelson, he encouraged the people of Hong Kong to continue to focus on the temple—especially because they have such a sacred structure in their midst.

“When you’re not in the temple here in Hong Kong, make sure the temple is in you,” Elder Holland said, “that whatever the environment you face, you’ll have the peace of the gospel of Jesus Christ speaking to you as God Himself spoke to the Prophet Joseph in Liberty Jail.”

Many were moved by President Nelson’s Christlike, one-on-one approach to his ministry.

“I was so touched by his kindness [and] by his love,” said Lance Chan, who joined the Church in 1972 and now serves in the Church’s Hong Kong Temple. “I could just feel it when he was going and saying goodbye to us. You know, I felt that he really liked to shake everybody’s hands. I could feel his love when he was going.”

President Nelson reminded Latter-day Saints that the work of the Church in Asia is only beginning.

“In a very real sense, you here today are pioneers. You’re pioneers in Hong Kong, Macau, Chengdu, Beijing, Shanghai, the Philippines,” he said. “The work of the Lord in these places is just beginning. And you are His people, His pioneers.”

Wendy Au, who has been a Latter-day Saint her entire life, says she takes President Nelson’s pioneer teachings to heart.

“We’re just a start; we’re just a little pioneer,” she said. “We have more generations to come to convert and [help] return back to the presence of Heavenly Father.”

The Church has 159 temples worldwide with 30 others announced or under construction. The Hong Kong China Temple was dedicated in 1996. 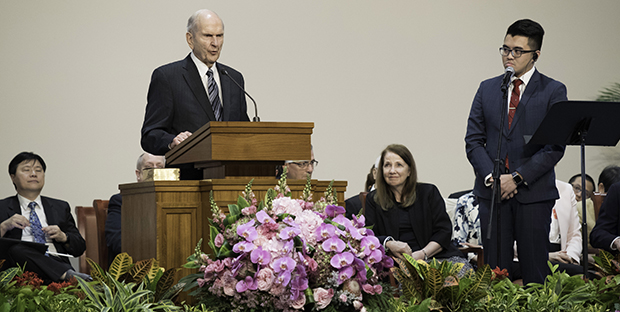 Some 4,000 Latter-day Saints in Hong Kong gathered to hear their prophet, President Russell M. Nelson, and Elder Jeffrey R. Holland April 21, 2018. The special meeting was one of eight cities the two leaders visited during their global ministry tour.

The beauty of sacred music by a choir of more than 100 Latter-day Saints in Hong Kong set the tone for instructive messages from President Russell M. Nelson and Elder Jeffrey R. Holland April 21, 2018. 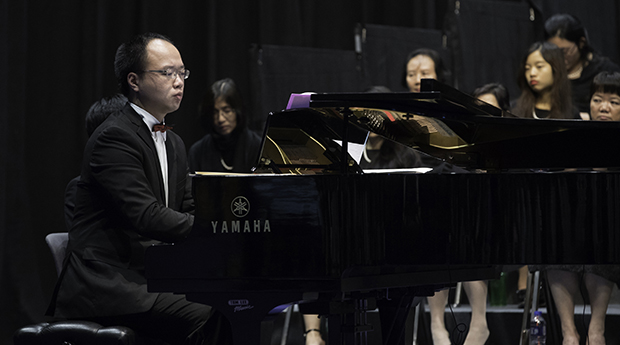 The pianist accompanied the choir during the special meeting for members in Hong Kong April 21, 2018, during which President Russell M. Nelson and Elder Jeffrey R. Holland of the Quorum of the Twelve Apostles taught and inspired the audience.