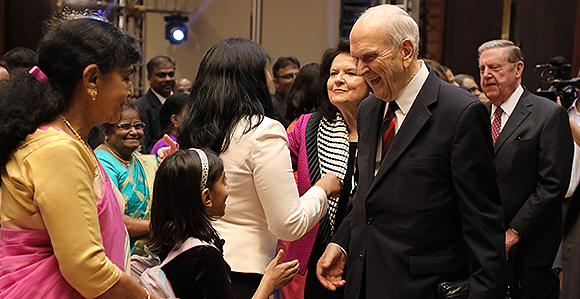 It was a special day for Latter-day Saints in India, April 19, 2018, as they were able to meet and listen to their prophet, President Russell M. Nelson. Joining him on his global ministry tour were his wife, Wendy, and Elder Jeffrey R. Holland and his wife, Patricia.

“The temple is our ultimate destination here on planet earth. All the blessings that God has in store for His faithful people come in the temple.” —President Russell M. Nelson

“The influence of the temple will be felt not only by the people here in this particular part of India, but it will bless the people of the entire nation and neighboring nations,” said President Russell M. Nelson as he reached Bengaluru, India, Thursday, April 19, 2018.

During the recent general conference, President Nelson announced that a new temple would be built in Bengaluru, the first Mormon temple to be built in India, a country with more than 1.3 billion people of many faiths, including Hinduism, Islam, and Christianity.

“It was a thrill for me to receive the real impression that I should announce that there will be a temple here in India,” he explained in an interview. “The temple is our ultimate destination here on planet earth. All the blessings that God has in store for His faithful people come in the temple.”

Bengaluru, the capital of India’s southern Karnataka state, is the fifth of eight cities on his global ministry tour. The Latter-day Saint prophet traveled to Asia following a series of meetings in Europe and Africa. 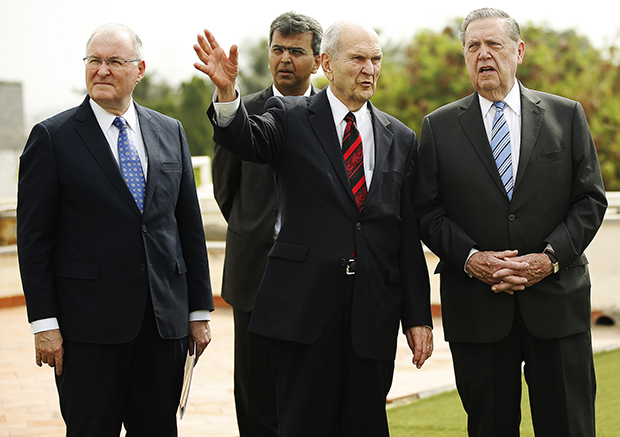 President Nelson is joined on the worldwide tour by his wife, Wendy, and Elder Jeffrey R. Holland of the Quorum of the Twelve Apostles and his wife, Patricia.

“In a way, it’s easier for us to build a temple than it is to build a people who are ready for the ordinances and covenants of the temple,” said President Nelson at a meeting for Latter-day Saints, missionaries, and visitors in Bengaluru. “It’s going to take you a little while to get ready. It will take us a little while to build it as well. … Now, I’m 93 years old. You better hurry.”

Prior to the meeting, the delegation looked at potential sites in the area for the new sacred structure.

“It’s going to be a national treasure,” added Elder Holland. “It will be revered and admired and loved by these millions of people and bless them in a wonderful, wonderful way.”

“I think our Church is growing fast in our country, and this will bring many blessings to our nation,” said Paul Vijayakumar, who served a mission in the area in 1988. “Those days here, very few people [were] able to bless the sacrament and pass the sacrament and partake [of] the sacrament. So today I’m happy that this hall was filled with a lot of members. And it was a dream for us that our prophet, President Nelson, came here.” 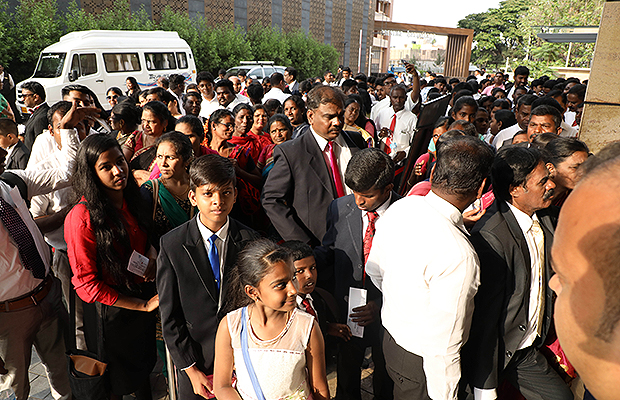 Members of the Church in India line up for an opportunity to see and listen to President Russell M. Nelson April 19, 2018.

“The temple is coming. I’m so happy,” said Mercy Lyuas, who also expressed her excitement to see President Nelson.

“I’m really excited to see the prophet myself, in my own eyes, in [the] India Bangalore Mission,” said her brother, Jerry Lyuas.

“It was wonderful to meet up with him and shake hands and say, ‘Welcome to India,’” said Pericho Prabhu of the United Christian Forum for Human Rights. “Keeping him in our special prayers, and he’s globetrotting, he’s traveling today, tomorrow, the day after.”

Prabhu continued, “It’s been a great thing being amidst all of you and meeting some of your officials here and the brothers, sisters, and bishops.”

There are nearly 1.2 million Latter-day Saints in Asia. 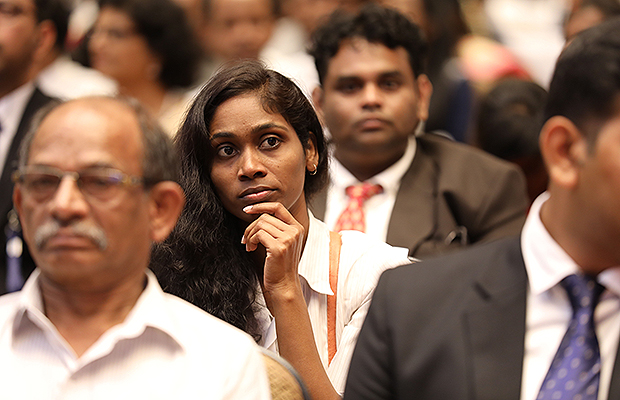 Latter-day Saints in India attending the special meeting with President Russell M. Nelson, April 19, 2018, had much to think about as he encouraged the members to be prepared to attend their own temple in a few years. He announced the first temple in India at the recent general conference.

The Church has 159 temples worldwide with 30 others announced or under construction, which includes the newly announced temple in Bengaluru.

India is home to more than 13,500 Mormons in 43 congregations. Unofficial missionary work began in India in the 1850s. The country’s first meetinghouse was dedicated in February 2002.

“They love God, and I love them,” expressed President Nelson, who first came to India in 1966 as an experienced cardiologist to attend a professional meeting in New Delhi. In 1992, he returned to India as an Apostle. 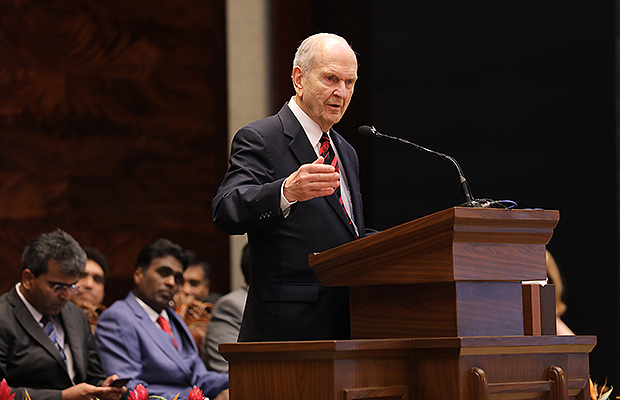 “It was a thrill for me to receive the real impression that I should announce that there will be a temple here in India,” said President Russell M. Nelson of his announcement in the recent general conference. He spoke to Latter-day Saints in Bengaluru, India, April 19, 2018, the location of the new temple.

“I met President Nelson in the year 1992, and with Elder Neal A. Maxwell,” said Joshua Thamizhmaran. “That time, there was only one branch in Bangalore. Now a stake.”

“Our approach is to take the poverty out of the people, not the people out of the poverty, as we teach them that God loves them and that if they’ll keep His commandments, they will have joy in life,” said the prophet.

Elder Holland first visited the country in 1977 as the Church’s commissioner of education. “The glory of the gospel comes, and they become motivated and industrious and seek for education, and they yearn for better employment and they want a better life for their children,” he said. 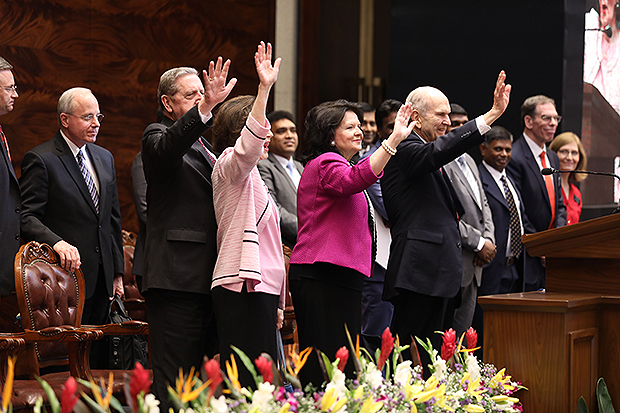 Happy with their visit to members in India April 19, 2018, the Nelsons and the Hollands wave good-bye.

The senior Mormon leaders are traveling to eight cities on three continents in 11 days. The tour began in the United Kingdom with a stop in London on April 12. Other cities have included Jerusalem, Israel, and the African destinations of Nairobi, Kenya, and Harare, Zimbabwe.

This is the first official trip for President Nelson outside of the United States since he was named the Church’s 17th prophet in January.

The global ministry tour runs April 10–23, 2018. The next stop on the tour is Bangkok, Thailand, where President Nelson will meet with members. Other destinations include Hong Kong, China, and Honolulu, Hawaii, United States. 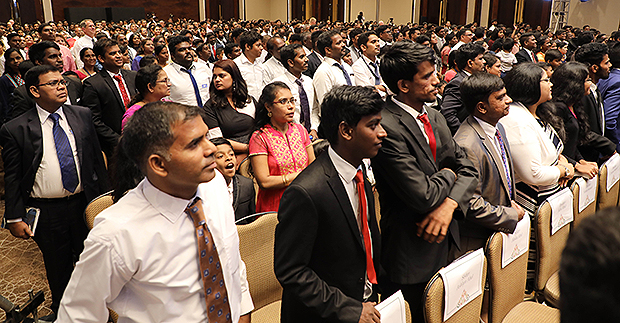 The meetinghouse in Bengaluru, India, was filled with Latter-day Saints excited to listen to their prophet April 19, 2018. President Russell M. Nelson and Elder Jeffrey R. Holland of the Quorum of the Twelve Apostles talked about how the temple President Nelson announced at the recent general conference would bless the lives of everyone in India. 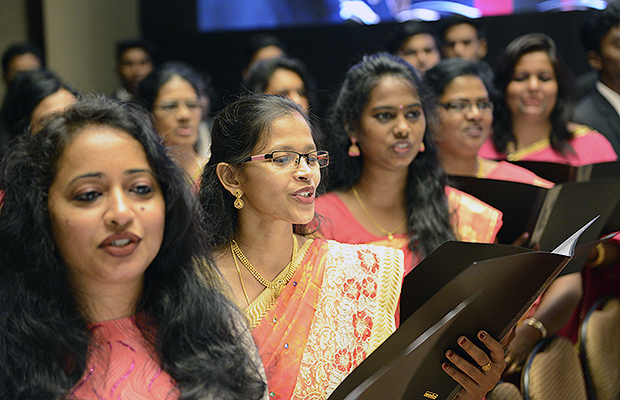 A choir of Latter-day Saints added to the sacred nature of the special meeting with President Russell M. Nelson in India April 19, 2018. 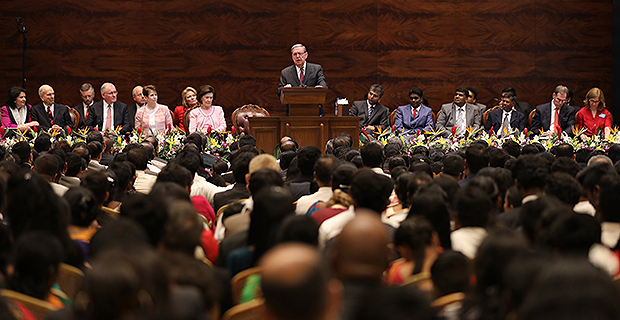 Speaking of the announced temple for Bengaluru, India, Elder Jeffrey R. Holland of the Quorum of the Twelve Apostles said, “It's going to be a national treasure.” He spoke during President Nelson’s global ministry tour April 19, 2018.