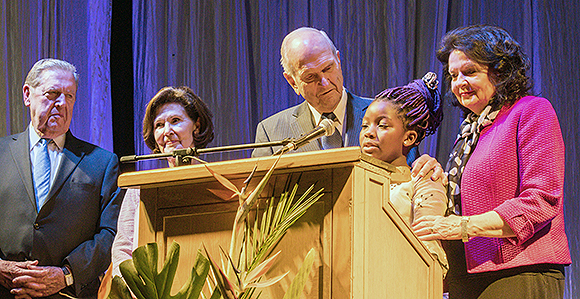 During the devotional in Harare, Zimbabwe, Tuesday, April 17, President Russell M. Nelson invited the primary children to stand and sing “I Am a Child of God.” A girl in the choir was invited to the podium to sing with the rest of the children.

“This is a sight that I shall always remember,” said President Russell M. Nelson during a visit to Harare, Zimbabwe, Tuesday, April 17, 2018.

More than 4,000 people gathered to hear President Nelson speak, including hundreds of children who sang a verse of “I Am a Child of God” at the beginning of his address.

His remarks were given at a devotional that was broadcast to congregations throughout Zimbabwe. This is his second stop in Africa and fourth destination on his global ministry tour. On Monday, President Nelson was in Kenya’s capital city of Nairobi. (See related story.)

President Nelson is joined on the worldwide tour by his wife, Wendy, and Elder Jeffrey R. Holland of the Quorum of the Twelve Apostles and his wife, Patricia.

Attendees began arriving at 8:00 a.m. before the scheduled 5:00 p.m. devotional. “That shows that everyone is ready and doesn’t want to miss this historic event,” said Gibson Guzha of Harare. 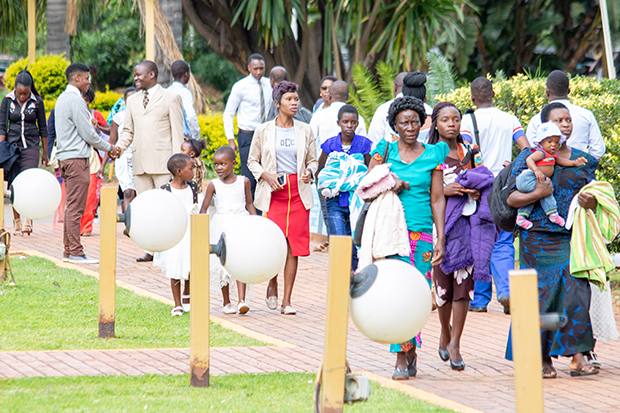 Members of the Church in Harare, Zimbabwe, gathered to listen to President Russell M. Nelson on Tuesday, April 17. President Nelson’s wife, Wendy, and Elder Jeffrey R. Holland and his wife, Patricia, spoke to the people.

Pretty Mukweya said, “I can’t even express it, I’m just super excited. I couldn’t even sleep. I couldn’t wait.”

Lovemore Tenganani added, “I’m really excited because when a prophet visits a nation, better things start happening. Most of us haven’t had the opportunity to have a prophet grace our great nation.”

The senior leaders, who stand as witnesses of the Savior, are traveling to eight cities on three continents in 11 days. The tour began last week with meetings in London and Jerusalem.

Elder Holland acknowledged the rapid growth of the Church in Zimbabwe. “What a wonderful, wonderful growing, dramatic, significant component you are of this Church, the restored Church of Jesus Christ. Your history has only begun, and really the Church’s history has only begun in terms of what it will yet be. But I’m thrilled to be with you, observing history.”

“I have had an experience to see how you worship,” said Sam Phiri, who works for the Times of Zambia newspaper in the country of Zambia, 250 miles away from Harare. “It’s quite exciting and it clears all the myth and misunderstanding which was also in my mind.”

Phiri was impressed with the prophet’s message for parents to guard their children. “Today we have seen a lot of alcohol abuse, drug abuse, and we’ve also seen a lot of substance abuse, including [offensive] language among the youthful people. … That to me was a very important and kind message because the future lies in the hands of the youth.”

“I don’t know when it will be completed.” remarked President Nelson. “You deserve a temple here in Harare because that’s where we get the highest of all the blessings that God can give to His faithful children. I want to be here to see that happen.”

Lovemore Tenganani is one of the many Latter-day Saints looking forward to the new temple. “We’re really excited and we’re really optimistic that things are going to change for the better in Zimbabwe, especially as we are about to have a temple in this nation.”

Church membership is growing in Africa, where there are about 540,000 Latter-day Saints.

Nearly 32,000 Latter-day Saints in 79 congregations reside in Zimbabwe, one of the most Christian countries on the African continent. Missionary work began in what was then Southern Rhodesia in the early 1930s.

There are three operating temples in Africa (Aba, Nigeria; Accra, Ghana; and Johannesburg, South Africa), two under construction (Kinshasa, Democratic Republic of the Congo, and Durban, South Africa) and two more announced, in addition to Harare (Abidjan, Ivory Coast, and Nairobi, Kenya), for a total of eight temples in Africa. 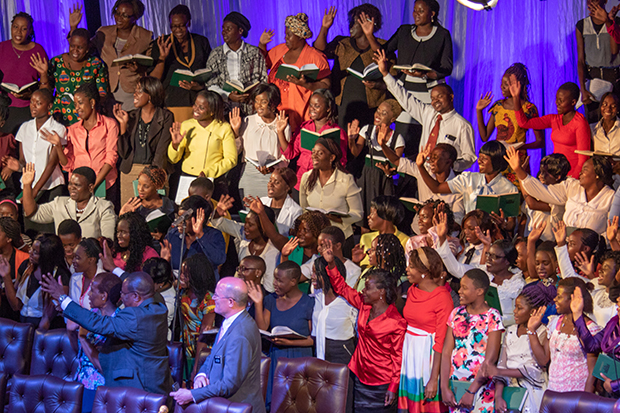 Latter-day Saints in Harare, Zimbabwe, were excited to attend the devotional, Tuesday, April 17, where President Russell M. Nelson Elder Jeffrey R. Holland encouraged parents to teach their children about Jesus Christ and to be good citizens. 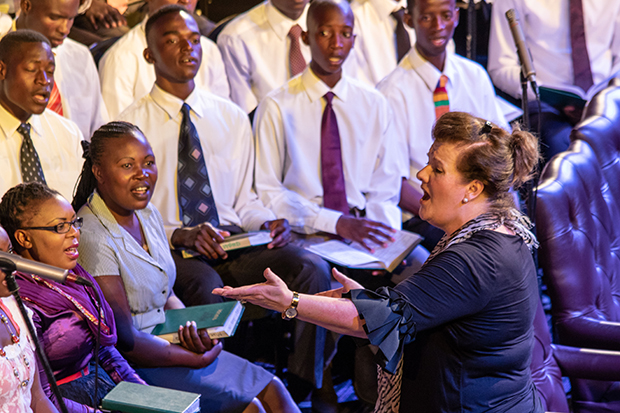 A Latter-day Saint choir provided the music as President Russell M. Nelson spoke to and greeted members in Harare, Zimbabwe, on Tuesday, April 17. 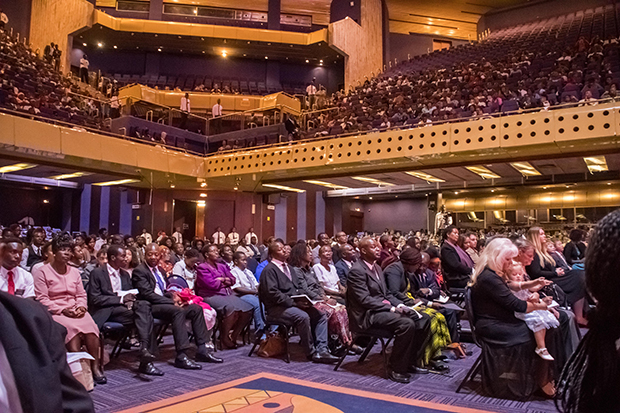 Latter-day Saints in Harare, Zimbabwe, were excited to hear the teachings of their prophet, President Russell M. Nelson. The attendees began arriving at 8:00 a.m. before the scheduled 5:00 p.m. devotional Tuesday, April 17.