One Man’s Family History and Its Significance While He Traveled with Elders Uchtdorf, Bednar in Europe

Elder David A. Bednar walks outside the St. Pancras Old Church in London on October 25, 2019. Photo by Scott Taylor.

Elder Dieter F. Uchtdorf of the Quorum of the Twelve Apostles rededicated the Frankfurt Germany Temple on October 20, returning to where he grew up, raised his family, and as Frankfurt’s stake president chaired the committee organizing the temple’s 1987 dedication events.

The following week, at RootsTech London, Elder David A. Bednar of the same quorum conducted meetings with Latter-day Saints, emphasizing family history work and temple ordinances. He spoke of visiting London’s archives to see the actual marriage record of his great-great-great-grandparents and visiting the parish church where they were married on December 25, 1851.

Shadowing Elder Uchtdorf and Elder Bednar to share those moments for the Church News, I reflected on being in my own ancestral homelands.

On the temple grounds in Friedrichsdorf, I listened as Elder Uchtdorf testified of the Savior and eternal truths in his native German—and I thought of Johann Jakob Zundel, a fraternal fourth-great-grandfather, who is considered the Church’s first German convert. I later mentioned him to Elder Uchtdorf, who excitedly shared his knowledge of this pioneer member and missionary.

Zundel was born in 1796 in Wiernsheim, some 160 kilometers (100 miles) south of Frankfurt. The Zundels had become Harmonists, a Christian theosophy and pietist society, and joined a group fleeing from persecution to the United States in 1805.

Later, in Pennsylvania, the family became disillusioned with the Harmony Society, but Johann Jakob Zundel felt prepared to embrace teachings of Latter-day Saint missionaries and was baptized in 1836 in the Ohio River. He made a journey to Kirtland and was ordained an elder, then moved his own family to join the Saints in Missouri and later in Nauvoo.

Zundel taught his native German to the Prophet Joseph Smith, who likely used it in studying Martin Luther’s translation of the Bible. He worked on the Nauvoo Temple in the early 1840s, served a mission to Pennsylvania in 1844, and was one of the last “temple guards” to remain in Nauvoo through the late 1840s.

Watching a visibly elated Elder Bednar retrace his ancestors’ steps in London, I thought of my many British Isles ancestors and focused on the Barlows, from Prestwich, near Manchester and about 340 kilometers (210 miles) northwest of London.

James and Ann Crompton Barlow are my maternal third-great-grandparents. He was one of the town’s early Church converts when baptized in 1839 and confirmed by William Clayton of “Come, Come Ye Saints” fame. Other family members soon followed.

The Barlows’ youngest child—Joseph Smith Barlow, a second-great grandfather—was born in 1848. Within 14 months, James Barlow passed away, leaving Ann Barlow a widow and Joseph and his siblings fatherless.

With the Perpetual Emigration Fund, Joseph Barlow joined his mother and two siblings sailing to the United States in 1856 and joining the Martin handcart company. After enduring the well-chronicled hardships and harsh weather, Ann Barlow dissuaded Salt Lake City doctors from amputating the eight-year-old’s frozen-below-the-knees legs. Healing well enough to walk, he died at age 27 of appendicitis, leaving a wife, three children, and a fourth on the way.

In Europe, I reflected on my opportunities and testimony as fostered by the efforts and sacrifices of the Zundels, Barlows, and many more ancestors. And I reflected on how the Church has grown in these homelands—from humble beginnings to today’s faithful congregations and the four temples operating in Germany and Great Britain.

As I contemplated my pioneering ancestors, I looked around in Friedrichsdorf and London at the gathered Saints, recognizing many were “pioneers” in their rights.

The Savior’s parable of the workers in the vineyard came to mind, where all workers—whether working all day or just the last hour—are paid the identical penny wage. I used to think of the parable as unfair—longer work should earn a greater wage.

And through ongoing family history and temple work, I and Latter-day Saints everywhere can continue to help set the table for ancestors still without covenant opportunities and deserving of their “penny wage” of identical eternal blessings, rewards, and opportunities. 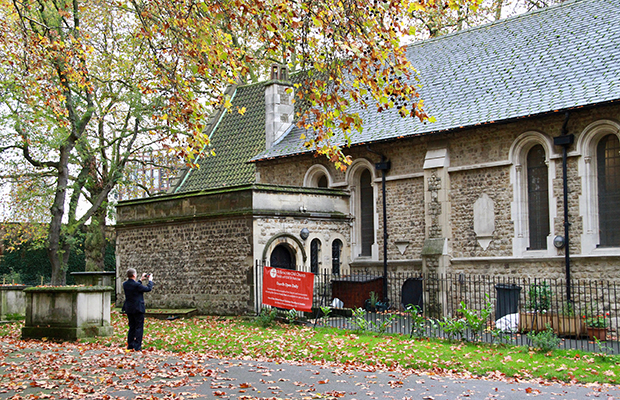 Elder David A. Bednar takes a photo of the outside of St. Pancras Old Church in London on October 25, 2019. Elder Bednar’s great-great-great-grandparents, Luke Syphus and Christiana Long, were married there on December 25, 1851. Photo by Scott Taylor.