Contributed By By Greg Duerden, ChurchofJesusChrist.org News and Events contributor

Bluff Fort in southeastern Utah was dedicated as the newest Church historic site October 12, 2013. The fort’s co-op store also serves as the visitors’ center, staffed by Church-service missionary couples. About 20,000 visitors came to the site so far this tourist season, which typically runs from March through October.

Elder Marcus B. Nash of the First Quorum of the Seventy dedicated the site as a “place of peace, reflection, learning, and remembering.”  Bishop Keith B. McMullin, emeritus General Authority and former member of the Presiding Bishopric, also spoke.

This historic site is significant for the LDS Church, San Juan County, and all of southeastern Utah because in 1879 and the early 1880s the area was the last uncharted section of the western United States. It is so remote that it was as late as 1905 before the last mountain chain in the state of Utah was discovered, the Henry Mountains.

The novel The Undaunted, by LDS author Gerald Lund, chronicles the journey of the LDS pioneers called by President John Taylor to open the San Juan Mission.  Most of these pioneers came from the Cedar City and Parowan areas. They trekked across the southern desert area to the Colorado River in covered wagons, charged with setting up an economy and a civilized life way of life.

According to Bishop McMullin, the fulfillment of the mission the pioneers were sent to accomplish was evidenced by the many descendants from near and far attending the dedication that day. “The past has simply laid the groundwork for something in the future,” he said. 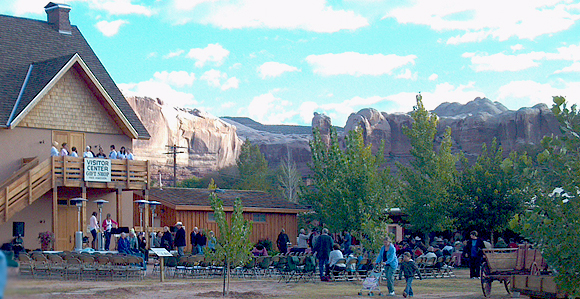 After the pioneers built cabins, the co-op store, and the rest of Bluff Fort, they established other communities, such as Mexican Hat, Blanding, and Monticello—all in today’s San Juan County, Utah—as well as areas which later became part of Colorado, Arizona, and New Mexico.

Bishop McMullin explained how Bluff Fort became one of the most prosperous communities of the State of Deseret by selling a portion of the increase of their fields, herds, and flocks to the cattle companies and Indians in that corner of what would become the State of Utah.

Other dignitaries at the dedication included Derek B. Miller, Governor Herbert’s chief of staff; Robert S. McPherson, Bluff Fort and San Juan County historian; President Michael W. Redd of the Blanding Utah Stake; and Corinne Roring, president and founder of the Hole in the Rock Foundation.

Roring has spent several years working on the restoration of Bluff Fort. Part of her efforts were focused on  getting the descendants of the pioneers to find family treasures from the period or locating period replicas to furnish their ancestor’s cabin. Each cabin is identified by the ancestors’ names, such as Nielson, Lyman, Smith, Perkins, Redd, Hobbs, Jones, Allen, Holyoak, Robb, and Dunton.