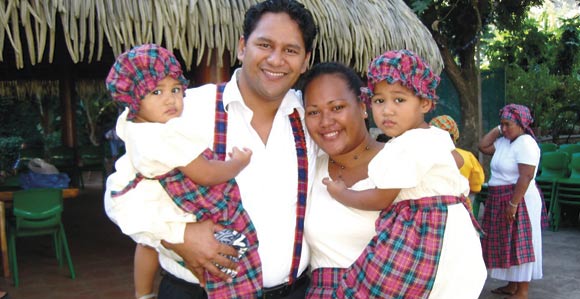 “Irrespective of time and nationality, I am connected to others who follow the Lord.”

Akie Taneda of Japan was a young girl when her family celebrated the early Latter-day Saint pioneers by having a “candle night” during which they used no electricity. “The candle’s flame was small, but it was a very warm light,” she said.

This weekend—like so many other Latter-day Saints around the world— Akie will reflect on the common spiritual heritage they all share as the Church commemorates the pioneers’ arrival in the Salt Lake Valley on July 24, 1847.

“When the season for celebrating the pioneers rolls around, I find myself humming the hymn, ‘Come, Come Ye Saints,’ and I repeatedly tell myself, ‘All is well,’” she said.

Because of her own pioneering background—as a teenager, her family members stopped attending church one by one, until she was the only one still going—Akie said she feels connected to the pioneers of the 19th century that she and her family celebrated when she was a little girl—and to all pioneers everywhere.

Young Akie enjoyed attending church, but she realized that “because I like it” was not really a sufficient reason to keep going when her family wasn’t. In searching for a deeper testimony, she prayed often, and one day, she received an answer.

“The Spirit clearly told me in my heart that Jesus Christ is our Mediator, and that God is the Father of my spirit,” she said.

After that, she tried even harder to turn her heart to the Holy Ghost and decided that no matter what, when she felt the Spirit, she would follow its promptings. She sometimes worried that her involvement at church would estrange her from her family, but her desire to be connected to her heavenly home helped her stay committed to her faith.

“My faith did not suddenly sprout up on a given day, but rather that it has been inherited in an unbroken line,” she said. “And I take comfort in the fact that irrespective of time and nationality, I am connected to others who follow the Lord.”

Faith to Make a New Beginning

Another such pioneer who has followed the Lord is Chinedu Oji Anya of Nigeria. In 1989, Chinedu was invited to attend his nephew’s baby blessing in an LDS meetinghouse. The meeting impressed Chinedu—he liked that the youth, women, and men were given an opportunity to speak. He had been searching for “a church where everybody was somebody and where Jesus Christ was Lord.” By the end of the year, Chinedu decided he had found what he was looking for in The Church of Jesus Christ of Latter-day Saints. He was baptized December 16, 1989.

But the road ahead wasn’t an easy one. As the first to leave his large family’s traditional church, Chinedu initially felt lonely in his new faith. He lost many close friends, and developing new patterns—like holding family scripture study, family prayer, and family home evening; paying tithing; and keeping the Sabbath day holy—were initially difficult, at least until his wife and children joined the Church six months after his own baptism. “I felt like a pioneer in many ways,” he said.

Learning about the early Latter-day Saints in North America helped Chinedu through his own difficulties.

“The harrowing experiences and the examples of the early Latter-day Saint pioneers really inspired me and increased my testimony that the Church is the only true and living Church upon the face of the whole earth,” he said. “That the Church survived and prospered even after the Prophet Joseph Smith Jr. was killed confirmed to me that Jesus Christ Himself is the Head of it and that it really is His Church.”

With that faith in the Savior, he began finding that the sacrifices he was making were worth the effort.

“My health improved as I stopped smoking and drinking alcohol,” he said. “We as a family are happier, and my wife and I are more in love. Above all, we felt much closer to God and our Savior, Jesus Christ.”

Today, Chinedu, his wife, and their children are working toward becoming an eternal family. As they look back at the more than 20 years they have spent in the Church—a period of time in which they have served in many leadership positions and have helped bring others into the Church—they are quick to recognize that the pioneer spirit can help all members of the Church.

“We have a lot of pioneers all over the world today, and we should really celebrate them. [They] have made several sacrifices to help the Church become what it is today,” Chinedu said.

And while he hopes that this year’s celebration of Pioneer Day will include reflecting on the history of the Church in the Owerri, Imo state of Nigeria and gathering with ward members at his home, Chinedu recognizes that being a pioneer is something everyone can do year-round.

“We can all be pioneers in our own ways and places,” he continued. “We can—regardless of how long we have been members of the Church—make sacrifices and also help our friends, relations, and associates embrace the gospel of Jesus Christ.”

An Opportunity to Reflect and Remember

That—helping others embrace the gospel—is exactly what Elder John Fenn and Sister Jean Fenn spend their time doing as they serve as the directors of the Mormon Handcart Historic Sites in Wyoming, USA. Each summer, some 25,000 youth participate in treks in the area; additional visitors—many of them of other faiths—also stop to visit the sites.

Although Elder Fenn is a direct descendant of a pioneer in the Martin handcart company, the thing that touches the couple most, Sister Fenn said, is when people who aren’t related by ancestry come through and recognize that they share in that legacy.

Coming to know the stories of the pioneers by visiting sites like the ones in Wyoming, participating in events like treks locally, or engaging in personal study “gives members of the Church a chance to reflect on what it is those people did to allow us to believe what we believe,” Elder Fenn added. “We are who we are because they were who they were.”

Nery Méndez Aguirre first became connected to Latter-day Saint pioneer heritage when his parents joined the Church in Guatemala when he was three years old. The Church was quite new in the country at that time, but it was growing.

In fact, it was growing so much that some land was purchased and construction on a new chapel began. At that time, members helped directly in the construction, donating time to open ditches, carry and place bricks, and work with cement, iron, and other materials.

“We all met together in work groups,” Nery said. “We ate together, and the brothers and sisters worked through the night since we couldn’t work on the chapel during our normal working hours.”

Upon the chapel’s completion, members were delighted with their new facility, which became the home of the Victorias Ward. It was there that Nery was baptized at eight years old.

But as the Church grew in the area and the chapel was filled to capacity, Nery and his family had to leave behind the chapel and begin meeting in a new place. Although the reasons for departure are different, the experience reminds him of the Saints who had to leave Kirtland after constructing a beautiful temple there.

Speaking of those saints, he said, “Without money and with very little resources, they gave, … and they finished the house of the Lord. Seeing such great sacrifices, He then provided them with some of the greatest spiritual experiences in the latter days.”

Similarly, Nery said that being a Latter-day Saint has come with sacrifices throughout his life. “Being members of the Church has meant not being able to participate in sports teams [on Sundays], being excluded from popular groups because we didn’t share habits like drinking and smoking, being rejected for keeping the law of chastity because it wasn't the fashion,” he said. “You could say that [like the pioneers], we traveled through the desert, because many times we were alone in our fight and search for the Spirit.”

When Nery left to serve a mission, his friends at the university called him crazy. Even his own father doubted the importance of missionary service at first because he worried about his son finishing his degree. But Nery not only completed his mission and his degree, he went on to become part of a select group of doctors who specialized outside the country. It was in Spain, where Nery went and where he now lives, that he met the woman who would become his wife and with whom he now has an eternal family.

“All these experiences have benefited me a lot as I’ve helped new converts in their path of discipleship in Christ,” Nery said. “It has helped me give them light and hope in a world where we are not persecuted physically but intellectually and morally.

“I am grateful for the example of the first pioneers of the Church who were willing to give everything, even their lives, for the wonderful work they had embraced,” he said. In celebrating Pioneer Day annually—through dance festivals, pioneer treks, songs, and poetry—he said, “we have obtained a lot of courage to confront our own adversities by learning of the great sacrifices they made. This is why we celebrate Pioneer Day. Because I know this is the work of the Lord, I have been willing to make my own sacrifices so that it will continue to grow.”