Pioneer Day Concert to Be Broadcast 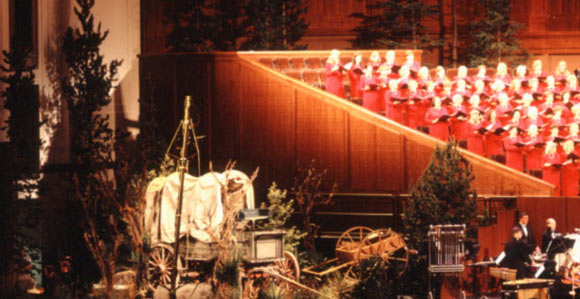 The Mormon Tabernacle Choir and Orchestra at Temple Square will be joined by Broadway stars Brian Stokes Mitchell and Linda Eder for the Church’s Pioneer Day Commemoration Concert, which will be broadcast via the Church satellite system, the Internet, and other media on July 23, 2011.

While paying tribute to those pioneers who left their homes and families to settle the West, this year’s celebration will also focus on men and women who have served in the military.

The choir and orchestra will perform its signature “Battle Hymn of the Republic” and other patriotic, inspirational, and folk favorites.

In addition to the musical tributes, a series of short video vignettes will tell the stories of commitment, loyalty, and heroism that so distinguish those who have served or are currently on duty in the armed forces.

Tickets to the event, which will take place on July 22, are gone, but video will be broadcast on broadcast.ChurchofJesusChrist.org on July 23, 2011, at 7:00 p.m. MDT, in American Sign Language, English, French, Portuguese, and Spanish. English audio will also be available at mormonchannel.org. Television and radio broadcasts will be available in some parts of the world. Check local listings or visit byubroadcasting.org or ksl.com.

Local priesthood leaders will receive a schedule of available rebroadcast times, which will also be published on broadcastinfo.ChurchofJesusChrist.org.