“During disasters like this, people need a nudge to see their way to the other side of the calamity.” —Elder Damasen Kakooza, a missionary from Kampela, Uganda

Recent heavy rains and poor drainage caused extensive flooding throughout Accra, Ghana, leading to thousands of people getting forced out of their homes to seek higher ground and protection from a weeklong storm, which began June 4. News media reported that flooding left at least 160 people dead. Accidents and injuries multiplied throughout the week, with thousands of people affected by the storm and its aftermath.

Heavy rains are not unusual this time of year in Ghana; there is a distinct rainy season that begins in late May or early June. Houses built in low-lying areas are often susceptible to flooding. Following the flooding, government officials visited the Nkrumah Circle to view the damage and pledge support for drainage improvements.

After the worst part of the storm was over, missionaries from the Ghana Accra West Mission mobilized to assist members and their neighbors by cleaning up sludge, mud, and rubbish that had accumulated in houses, compounds, and streets. Leaving proselytizing activities to focus on cleanup efforts, missionaries replaced white shirts and ties with work clothes, sandals, and gloves for a few days. The mission bought gallons of liquid soap and bleach and then sent missionaries house to house in affected neighborhoods to give out small bottles and show residents the dilution formula for bleach so they could use it as a disinfectant.

“We met many people who had no idea that they needed to disinfect their clothes and houses,“ said Elder Gabriel Liera from El Centro, California. “They were so surprised that we were giving them bottles of soap and bleach without even asking if they were members of the Church.”

Elder Victor Uzoho from Aba, Nigeria, was reluctant to go help shovel at one church because they sometimes called the LDS Church a cult and said other bad things about it. “Sister Hill, our mission president’s wife, is always saying, ‘We can do hard things,’ so I soon stopped complaining in my mind and instead saw how much good we were doing,” he said. “I think they see us differently now because we were willing to get dirty by cleaning out gutters and washing walls alongside them. By our actions, we were doing the best kind of proselytizing that we could do on that day.”

“We saw so many people who had almost everything they owned ruined,” said Elder Leland McCullough of Provo, Utah. “We went to a compound where residents were aimlessly washing their clothes in a bucket with a plain bar of hand soap and hanging them on a clothesline with streaks of mud still embedded in their clothes. When we gave them jars of liquid soap and bleach, we also gave them hope. We demonstrated how to use the bleach and showed them what a difference it made. I saw people who were utterly dazed and hopeless brighten and change just during the time that we were there.”

“During disasters like this, people need a nudge to see their way to the other side of the calamity,” said Elder Damasen Kakooza from Kampela, Uganda. “When we got to the compound of two less-active members, we had brooms and mops and worked side by side with them, so conditions improved quickly. We worked all day not only with these two sisters but also helping others in the compound—Christians and Muslims alike. It didn’t matter to us. We were happy that the two sisters came to church this past Sunday for the first time in quite a while.”

“We saw people who were very vulnerable, and we reached out to them with assurance that they could get through this mess,” said Elder Bry Wickham from Pocatello, Idaho. “We met people who didn’t know where to turn, what to do next, how to recover. We worked together. We showed them somebody cared. We didn’t ask for anything. We gave them hope. And that was what they needed most.” 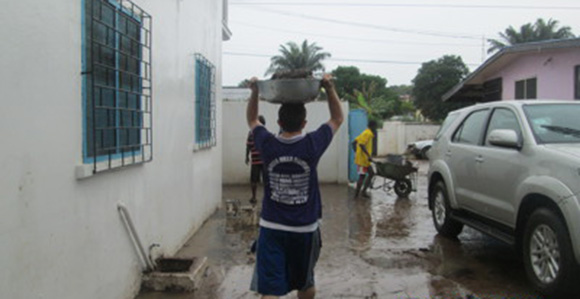 During cleanup efforts after massive flooding in Accra, Ghana, a missionary balances mud on his head after he removed it from the ground. Courtesy of Norman C. Hill. 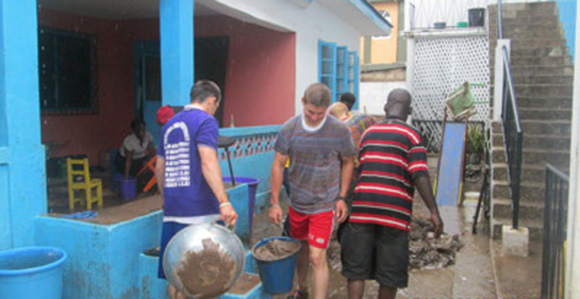 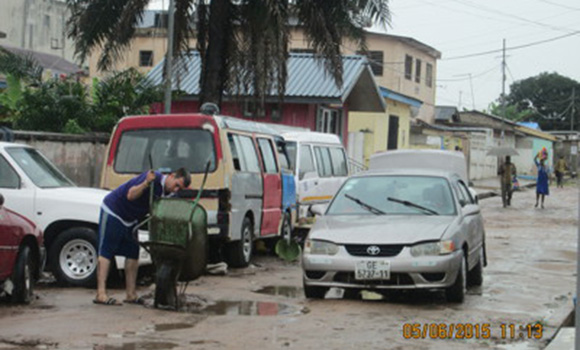 In a flooded street in Accra, Ghana, a missionary uses a wheelbarrow to remove mud. Courtesy of Norman C. Hill.