“We are working to get … information out quickly to a network of organizations, which can then immediately deploy volunteers to help our most vulnerable citizens. This will help the city, as a whole, recover faster.” —Neal Rackleff, director of the City of Houston Housing and Community Development Department

Houston’s mayor has included LDS missionaries among volunteers specifically called upon to help residents recover from recent flooding and prepare for anticipated emergencies.

The Houston Volunteer Disaster Assistance Initiative was launched on May 29 to “coordinate and support the efforts of Houston’s many volunteer groups so they can more quickly identify and assist elderly, disabled, and low-income residents who are least likely to be able to handle disaster cleanup themselves,” according to information released by the City of Houston Housing and Community Development Department.

“When disaster strikes, the city’s immediate focus is on responding to major public needs such as infrastructure and safety,” said Mayor Annise Parker. “We have not had a system in place to support the efforts of volunteer organizations which are willing and able to assist individuals but need help identifying those most vulnerable. With hurricane season days away, we have an opportunity to develop and test a system, while helping our residents recover from this week’s flooding.”

The initiative’s inaugural deployment came as HCDD employees and missionaries from the Church, which has a readily available disaster response team, canvassed Houston neighborhoods identified by calls received through the city’s 311 line. Most missionaries speak both English and Spanish, which allows them to communicate with most people they encounter. During the canvassing, they identified needs, and volunteers were then sent out to assist the elderly and disabled with cleanup efforts in the wake of recent flooding.

Though the flooding was confined to a limited number of residential areas, each flooded home required massive amounts of work for restoration. Floodwaters contain chemicals for industrial facilities, pesticides from lawns, bacteria, and mold spores, to name a few. After the waters recede, almost everything they have touched is contaminated. Massive amounts of soaked household and personal belongings are dragged out of the residences and heaped up on the curb. Waterproof gloves and masks are often worn during cleanup. After all floor covering has been removed, concrete floors are treated with bleach.

One grateful recipient recalled the experience “overwhelming.” “My neighbor called me at 1:45 a.m. to ask if I had water in my house. I ran out and saw water coming across the carpet. Ten minutes later it was up to my knees,” said a southwest Houston resident and teacher, Pam Keller. After the floodwaters receded, “I just sat and looked around for about two hours in a state of shock. Then I got to thinking about all the work there was to be done and all the loss,” she said.

She recounted that a neighbor told her of the Mormons who would come and help. “So this morning the doorbell rang and all these people were here. It’s just fabulous and Christ-sent—very supportive and loving,” she said.

HCDD director Neal Rackleff is leading the initiative. “The city has the systems in place to immediately identify the areas of greatest need. We are working to get that information out quickly to a network of organizations, which can then immediately deploy volunteers to help our most vulnerable citizens. This will help the city, as a whole, recover faster,” he said. 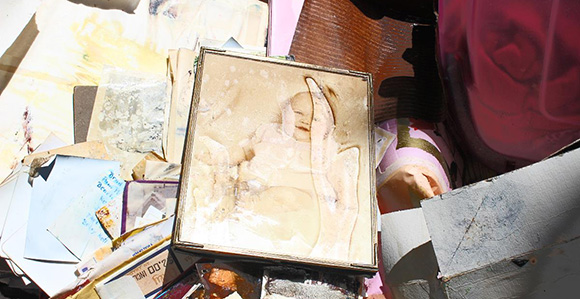 Personal mementos, including photos, letters, and other papers, are among items contaminated by floodwater. Photo by Jennifer Martino. 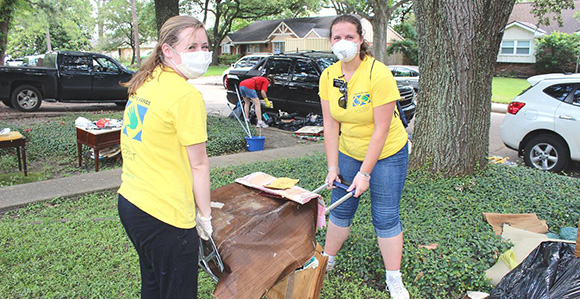 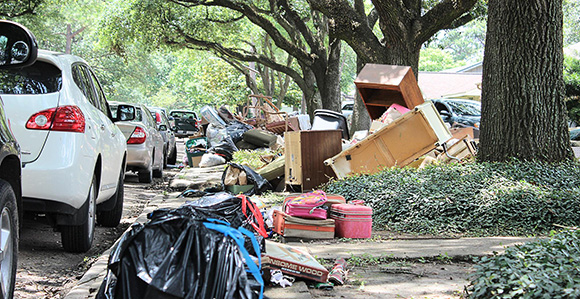 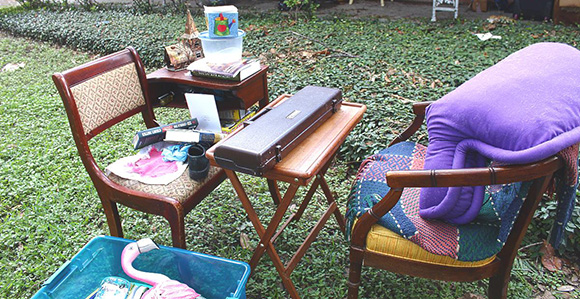 Some treasured furnishings are salvaged from a flooded home. Photo by Jennifer Martino. 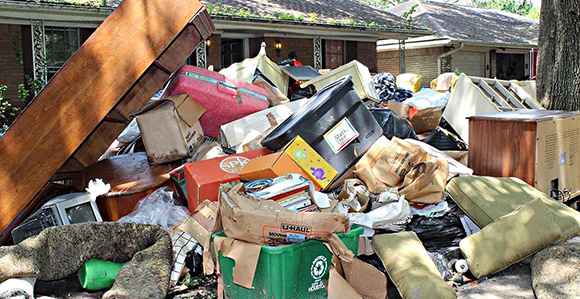 Damaged items are dumped curbside in front of a home damaged by flooding in Houston, Texas. Photo by Jennifer Martino. 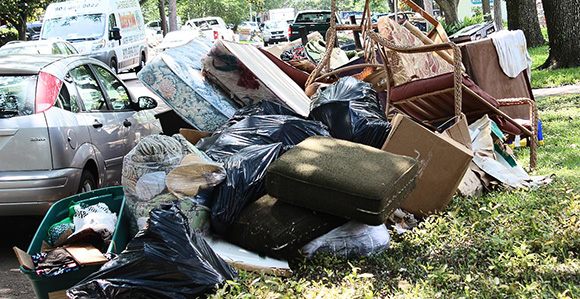 A flooded home’s contaminated contents are heaped up in piles for removal. Photo by Jennifer Martino. 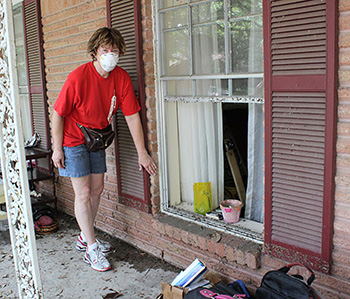 A volunteer points out the high-water mark on the home of Pam Keller. Photo by Jennifer Martino. 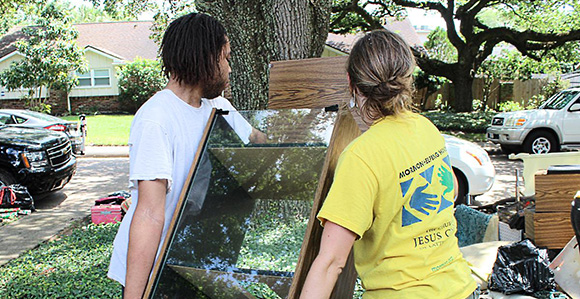 A sister missionary, at right, and community member move belongings from a home that was flooded in Houston, Texas. Photo by Jennifer Martino. 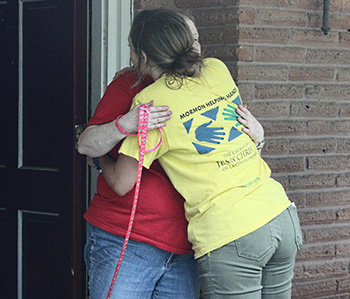 A sister missionary, wearing a Mormon Helping Hands shirt, gives a compassionate hug to Pam Keller, whose home was damaged by floodwater in Houston, Texas. Photo by Jennifer Martino. 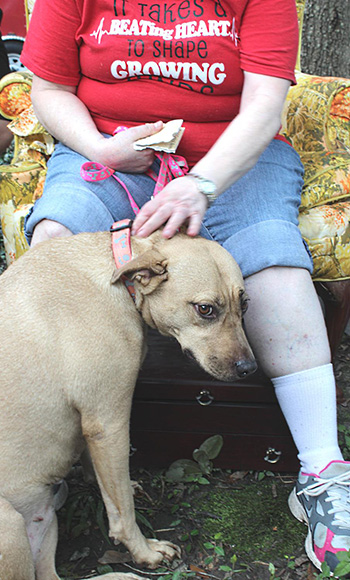 Homeowner Pam Keller and her companion struggle to adjust. Photo by Jennifer Martino. 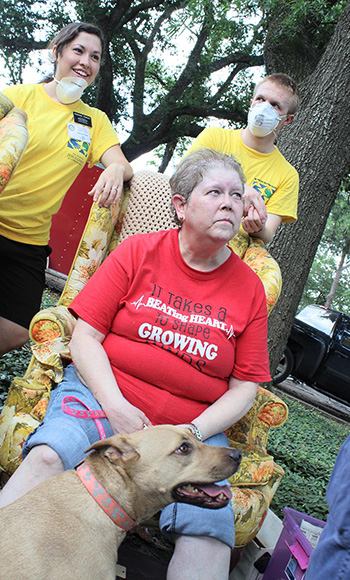 Pam Keller sits in living room chairs removed to her front lawn by missionaries who are standing behind her. Photo by Jennifer Martino. 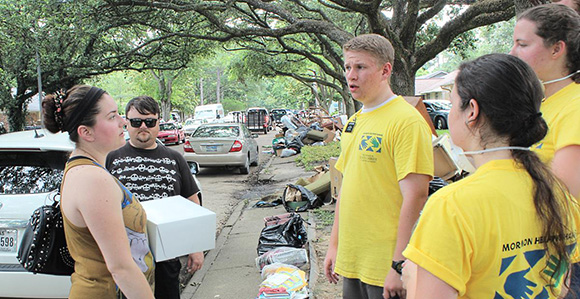 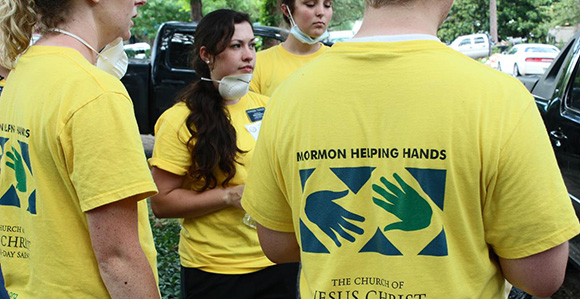 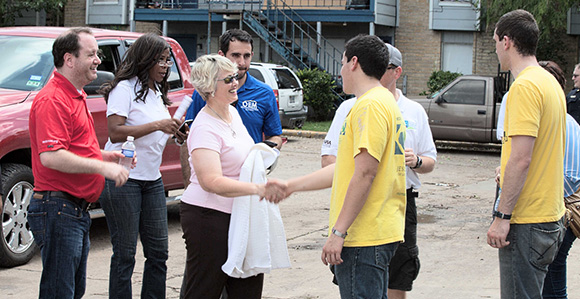