Dancers with fans form the number “20” during a performance held to commemorate the 20th anniversary of Elder Neal A. Maxwell’s dedication on April 15, 1993, of the land of Mongolia for the preaching of the gospel.

“The Lord’s hands have been moving unceasingly in this part of His vineyard.” —Elder Neal A. Maxwell (1926–2004)  of the Quorum of  Twelve

On a beautiful, snowy day — Monday, April 15, 2013, at precisely 4 p.m. — more than 300 Latter-day Saints gathered at the top of Zaisan Hill in Ulaanbaatar, Mongolia, to hear a recording of the prayer Elder Neal A. Maxwell offered as he dedicated the land 20 years earlier on that day, hour and location. The theme of the anniversary commemoration, “Remember, this is your gift” (Doctrine and Covenants 8:5), was a reminder of the gift of the gospel to the people of Mongolia “in the nethermost part of the [Lord’s] vineyard” (Jacob 5:13).

Elder Tai Kwok Yuen, former member of the Asia Area Presidency who accompanied Elder Maxwell to Mongolia in 1993, observed how “the Lord’s hands have been moving unceasingly in this part of His vineyard.” Besides Elder and Sister Tai, the first two mission presidents and their wives attended, along with several of the first senior missionary couples.

Also in attendance was Sister Lanette Brough who spoke of the 1984 trip to Mongolia of her husband, Elder Monte J. Brough, a member of the Seventy from 1989-2007, and his sons. He and his sons fell in love with the Mongolian people. Elder Brough said, “I prayed that one day they would hear the gospel.” Before leaving Mongolia, one son asked, “Do you think they will ever hear the name of Joseph Smith here?” Elder Brough replied, “I don’t think so in my lifetime.” However, he later returned to Mongolia, representing the Asia Area Presidency, and in 1992 he negotiated the sending of six English-teaching missionary couples to Mongolia. Since that time, the name of Joseph Smith has become known in Mongolia. Before Elder Brough’s passing in 2011, there were more than 9,000 members of the Church, and today it has grown to 10,600.

Just one day after the devotional, rooms and halls full of historical displays depicted the early history of the Church in Mongolia and an evening devotional featured greetings and expressions of love from mission presidents, wives and former missionaries who traveled to Mongolia for the anniversary. 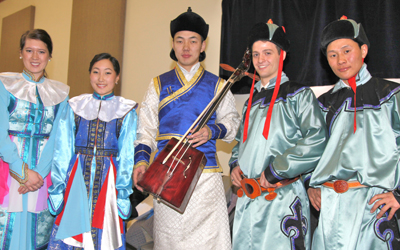 A cultural program noting the 20th anniversary of the dedication of Mongolia for preaching the gospel feature a group of performers, including a musician with a cello-like instrument called a morin khuur. Photo courtesy of the Mongolia Ulaanbaatar Mission.

When President and Sister Cook first arrived in Mongolia in 1994, the first senior couples had returned home after laying a foundation for the future of the Church in the country. Early members suffered persecution for joining a Christian church, losing employment and friends. There was difficulty finding places to meet and places to baptize. At one point, candidates needed to walk through a bar to get to a spa where baptisms could be performed.

In April of 1995, after the Cooks had been serving as senior missionaries for nearly a year, President Gordon B. Hinckley called them at about 5 a.m. to inform them that the Mongolia Ulaanbaatar Mission was to be organized. He then asked Elder Cook to serve as the first mission president and told them, “Go forward with faith. The Lord is in charge.” 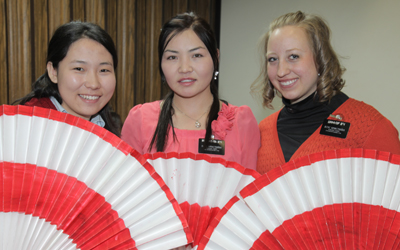 Missionaries display fans used during a cultural program held April 20 in the State Circus Building. The event commemorated the 20th anniversary of the Church in Mongolia. Photo courtesy of the Mongolia Ulaanbaatar Mission.

The Cooks shared some of their “miracles of Mongolia” that paved the way for missionary work to go forward, including the acquisition of visas that had been hard to come by. Thursday evening’s devotional presented video greetings and expressions of love from former (and newly called) mission presidents and their wives, missionaries, and Elder John H. Groberg, now an emeritus General Authority who served as president of the Asia Area Presidency from 1994 to 1998. 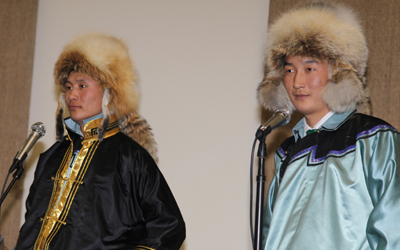 Dress in traditional Mongolian attire, a pair of singers take their places in the State Circus Building during a program held April 1. Since its dedication 20 years, Mongolian membership has grown to more than 10,000. Photo courtesy of the Mongolia Ulaanbaatar Mission.

On Friday afternoon, a family history open house featured displays that were hosted by Ulaanbaatar family history consultants. Displays encouraged members to gather, organize and preserve family records and included examples of memory books, old photographs, histories and pictures of couples sealed at the Hong Kong China Temple. On Saturday afternoon, 200 returned missionaries met at a combined mission reunion followed by breakout groups for each mission period. Uplifting missionary experiences were shared. More than 1,000 Mongolians have served as full-time missionaries which is almost one out of every 10 members of the Church in Mongolia.

Saturday evening’s cultural extravaganza at the State Circus Building featured Mongolia’s rich culture and talents of many Church members. The program included performances by local members, a contortionist, a morin khuur (a cello-type instrument) player, throat singers, traditional dancers, a combined stake and district choir, a missionary choir, operatic solos and music of the Restoration of the gospel. The overhead screen played slides and videos that enhanced the numbers being performed.

The week’s anniversary events immediately followed the Asia Area broadcast of April general conference. Most events were broadcast to the 16 Church buildings throughout Mongolia. The week’s events touched hearts, renewed bonds of love and strengthened thousands. Elder Stan Smith, one of the first senior missionaries to serve in Mongolia, said the 20th anniversary was a highlight of his life second only to that of his mission to Mongolia.