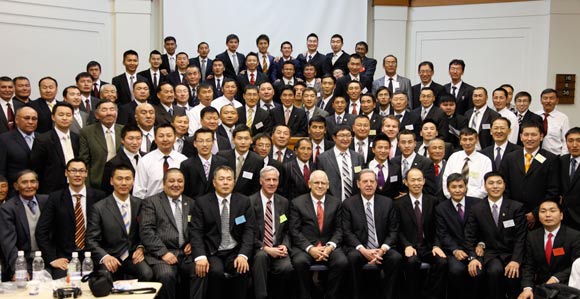 Elder Holland met with government officials, missionaries, and members during a visit to Mongolia on May 28 and 29, 2011.

After spending time in India and Hong Kong during the latter part of May 2011, Elder Jeffrey R. Holland of the Quorum of the Twelve Apostles, along with members of the Seventy, met with Mongolian government officials, missionaries, and Church members in Ulaanbaatar, Mongolia, on May 28 and 29.

While meeting with government officials, Elder Holland said, the Church was offered the opportunity to recommend religious policies, which are still being developed in the country.

“[The government] is new and young in the same way the Church is here,” he said. “We’ll grow together.”

During his visit Elder Holland was able to meet with the missionaries in Mongolia. Today the Mongolia Ulaanbaatar Mission has grown to include more than 100 full-time missionaries, many of whom are native Mongolians.

“There are a thousand things I could talk to you about,” he told the missionaries. “I’m going to go back to basics because the other things won’t matter… unless you can understand something that we call in our missionary approach the ‘doctrine of Christ.’”

For their own sake and for the Church’s sake, missionaries must understand who they are and what the Church is if they are to reach their potential and save the human family, he said.

Elder Holland said he was impressed that missionaries so young in the Church already know so much and are doing so much. “You’re the children of destiny,” he told them. “You are the children of God. You are in every way the disciples of Christ.”

In a special stake conference attended by nearly 2,000 members on Sunday, May 29, Elder Holland extended the love of the Brethren to the Mongolian Saints and emphasized the importance of the family.

Focusing on the topic of family throughout the stake conference, Elder Holland taught the plan of salvation and emphasized that all families can live together with Heavenly Father forever.

During the conference Elder Holland also commended the sisters in Mongolia for their faithfulness. Women of the Church have always borne the flag of faith, he said.

He challenged the men to step up to their priesthood responsibilities and promised that as they do, the power of the priesthood will change the country.

Many of the changes Elder Holland described have already begun. Religious freedom was first established in Mongolia 20 years ago, and the first missionaries from the Church arrived two years later, in 1993. Today Church membership in Mongolia totals more than 10,000 Saints.

Describing his experience in Mongolia as “thrilling,” Elder Holland pronounced a blessing on the land, on the government, and especially on the people, asking Heavenly Father to bless them that they might continue to see miracles as the Church in Mongolia continues to grow.