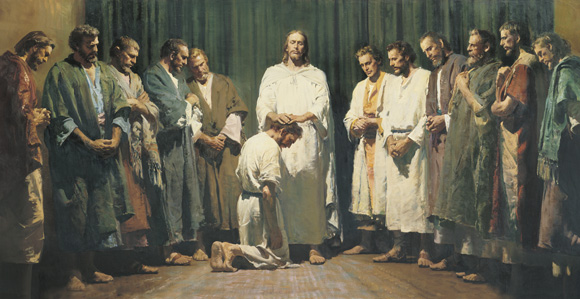 Christ Ordaining the Twelve Apostles, by Harry Anderson. The priesthood line of authority for those performing ordinances can be traced back to the Savior.

“Isn’t it exciting that whenever you lay your hands upon a person to ordain him it is the same as if the Lord himself did it?” —President Spencer W. Kimball

Speaking on the importance of every priesthood holder being able to trace his own line of authority, President George Q. Cannon, First Counselor in the First Presidency to John Taylor, said, “I believe the time will come when it will be necessary for every man to trace the line in which he has received the Priesthood that he exercises. It is therefore of great importance in our Church that records should be kept and that every man should know whence he derives his authority—from what source, through what channel he has received the Holy Priesthood and by what right he exercises that authority and administers the ordinances thereof. I believe this is of extreme importance and that where there are doubts as to a man’s legitimately exercising that authority, that doubt should be removed” (Gospel Truth: Discourses and Writings of George Q. Cannon, sel. Jerreld L. Newquist [1957], 224).

Priesthood line of authority is a sequential pattern of ordinations that can be followed back to the early beginnings of the Church. It is performed in the manner outlined by the Lord in the scriptures. Part of the Restoration of the gospel included the restoration of the priesthood on the earth by those in authority. Peter, James, and John conferred the Melchizedek Priesthood on Joseph Smith, thereby giving him the same authority given them by Jesus Christ. “And no man taketh this honour unto himself, but he that is called of God, as was Aaron” (Hebrews 5:4).

The priesthood line of authority for those performing ordinances can be traced back to the Savior.

The restoration of the Melchizedek Priesthood is portrayed by artist Kenneth Riley.

Joseph Smith Ordaining Parley P. Pratt as an Apostle is a painting by Walter Rane.

“I am wondering how many of you are able to trace your priesthood genealogy back to Jesus Christ?” said President Spencer W. Kimball to priesthood brethren at an area conference in Japan in 1975. “Isn’t it exciting that we are that near to the Lord Jesus Christ in this most important element? And isn’t it exciting that whenever you lay your hands upon a person to ordain him it is the same as if the Lord himself did it?” (Japan Area Conference 1975, 42).

If you wish to request your priesthood line of authority, include your full legal name, birth date, membership record number (available on a temple recommend or from your ward clerk), the name of the individual who ordained you to the office of elder or high priest (if known), and your return address and telephone number or email address.

Send your request to:

For email inquiries, send an email to lineofauthority@ChurchofJesusChrist.org with PLA in the subject line. In return you’ll receive a form to fill out and return (there is an automated reply to any message that contains “PLA” in the subject line).

·      Joseph Smith and Oliver Cowdery received the priesthood in 1829 from Peter, James, and John