Looking Back: What D. Arthur Haycock Learned as a Secretary to Several Prophets and Apostles 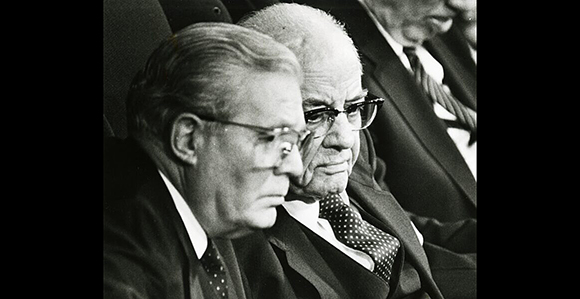 “We’ve built such close relationships as we traveled the world together. We . . . laughed, cried, and prayed together in all kinds of circumstances.” —D. Arthur Haycock

Few people have had a closer association with multiple Presidents of The Church of Jesus Christ of Latter-day Saints than D. Arthur Haycock. For an article Dell Van Orden, then Church News editor, and I wrote in 1986, Brother Haycock shared anecdotes from personal associations with seven prophets. Our two articles were published in the January 19, 1986, issue of the paper announcing Brother Haycock’s call to serve as president of the Laie Hawaii Temple, ending a 48-year career in Church employment working with prophets and apostles.

Brother Haycock’s service to the Church Presidents to whom he was personal secretary went beyond working relationships. He always made himself immediately available whenever they needed him, day or night, whether it was performing a simple task such as buying one of them a new pair of shoes or crisscrossing the globe many times with them.

“We’ve built such close relationships as we traveled the world together,” Brother Haycock reminisced during a Church News interview. “We . . . laughed, cried, and prayed together in all kinds of circumstances.”

Brother Haycock began working for the Church in 1938, during the last years of President Grant’s administration. He said he had a desire to work for the Church as early as his missionary days to Hawaii, 1935–37. When he returned home, he went to the Church offices every day at noon for several months to see about employment. His persistence paid off. He was hired.

President Grant died in 1945. Brother Haycock reminisced about becoming President George Albert Smith’s personal secretary: “I didn’t know President Smith very well. I didn’t know that he knew I even existed. I was scared to death to work that closely with the President of the Church. . . . He was truly Christlike and sensitive and had a wonderful dry sense of humor.

“He had only one good eye. Toward the end, I read everything to him, including the mail. Sometimes people would write something that was unintentionally funny. Someone had written, ‘President Smith, I’d like to know what your opinion is of cremation and cocoa.’ I couldn’t think of two things that went together less; I broke out in laughter. President George Albert was quick with his reply: ‘Write and say they’re both hot.’”

“He was Church historian for 40 years or more and knew the scriptures. . . . At the pulpit, he never made people laugh; he gave a serious gospel discourse. When I got with him, I found him to be gentle, kind, sensitive, loving, and shy. . . .

“Many people didn’t know what a great sense of humor he really had. We had been to BYU with his dear wife, Jessie, who so much enjoyed life. He and Jessie had spoken. Then, turning to the congregation, her hand cupped to her mouth, she said in a loud stage whisper, ‘I think I can get Papa to sing a duet with me.’ Everyone applauded. When he got up to sing, he was passed the microphone and said, ‘This isn’t a duet; it’s a do-it. I have to do it whether I want to or not.’ . . .

“When we were driving back to Salt Lake City, I said, ‘President, those students were really touched; they were weeping when they heard you sing.’ He said, ‘I can understand. My singing is enough to make anybody cry.’”

Brother Haycock was personal secretary to President Lee from the time of his becoming President of the Church on July 7, 1972, until his death 18 months later, on December 26, 1973.

“President Lee had been my seminary teacher and had ordained me a bishop. . . . I always felt close to him. He was very complex, and I mean that in a most complimentary way. No one ever joked with President Lee; you always waited for him to set the tone. There was never a better host nor a more gracious and gentle man. He was meek. I don’t think anybody, except the Prophet Joseph, knew more about priesthood and Church government. . . . He was a fearless champion of truth in declaring testimony. . . .

“He was very down to earth. Some might call him ‘the poor man’s president.’” He was instrumental in starting the Church Welfare Program.

Brother Haycock reflected on President Kimball: “This marvelous president had us all lengthening our stride, raising our sights, quickening our pace. . . . He had the ability to express ideas in poetic imagery, sort of like parables. He didn’t have to struggle to do this. It just seemed to flow. . . .

“He had a great love for people. We traveled far and wide, and everywhere he went, he enjoyed the people, the common people. But he was equally at home with kings, presidents, and prime ministers. He was never nonplussed, never put on airs, yet he was dignified and well received. He was a common man with an uncommon ability and faith and temperament.

Brother Haycock, who served briefly as his secretary, described President Benson as “a man of vast experience, and a man who loved home, family, and country[,] . . . dedicated to preserving those great fundamentals.”

In 1986, President Benson called Brother Haycock to serve as president of the Laie Hawaii Temple, a calling he found especially rewarding, having served in Hawaii as a young missionary and as a mission president.