Looking Back: How the Gift of Water Blessed African Lives 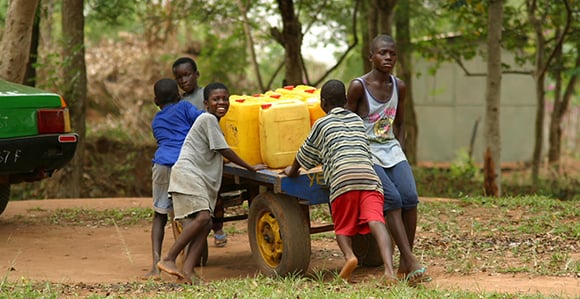 Before Ghana’s village of Katapor had access to fresh well water, boys hauled polluted water from a nearby river. In many parts of Africa, women and children walk long distances to bring water to their homes.

“Everyone was in a festive mood; the ceremony that day marked the end of villagers having to walk a half mile or so to draw from a polluted river water for drinking, cooking, and bathing.” —Gerry Avant, Church News

For many years I wrote articles about the Church welfare program. One of my primary sources was Ike Ferguson, who held several titles, including director of international welfare and humanitarian services. He spent a lot of time in Africa working on behalf of the Church to bring relief, supplies, and support to countless people suffering from famine or the effects of drought or other challenges on the continent.

I don’t remember the facts and figures of how many tons of grain or the number of wheelchairs or shipments of medicine and medical equipment that were sent by humanitarian services, which worked with government and nongovernment organizations and other faith groups.

I remember Ike telling me about many water projects, some involving laying miles of pipes for transporting spring water or digging boreholes for village wells. He described how women and children in some African villages made daily treks to rivers to bring water to their homes. The women usually carried five-gallon containers on their heads; their young children trailed behind them carrying smaller buckets or jugs of water.

During one of the interviews, I asked Ike to tell me what he thought about when he returned home from his assignments. He said that one time he walked into the kitchen and turned on the water tap and then stood there for a few moments. He looked at the flow of clean, clear water. He thought of how fortunate, how blessed, he was to have such water so readily and abundantly available.

For some reason, his description has stuck with me over the years. I often think about what the Church is doing to bring clean water to people in Africa and other places.

In 2004, I had the opportunity to witness a ceremony in which LDS Charities handed over two boreholes, or fresh water wells, to the village of Katapor. Derl and Erma Walker, who were serving as LDS Charities directors in Ghana, gave David Pickup, a photographer, and me a ride. Although Katapor was only 40 miles from Accra, Ghana, the drive took two hours, the last stretch over a narrow and bumpy dirt road.

The village had no electricity. Villagers found entertainment in the playing of drums, joining neighbors in traditional West African dances and songs, and visiting one another. All in all, it was a pleasant place, with views of gently sloping hills in the distance, a school, and very friendly residents. With no display of timidity, children ran to greet us.

Everyone was in a festive mood; the ceremony that day marked the end of villagers having to walk a half mile or so to draw from a polluted river water for drinking, cooking, and bathing.

No Latter-day Saints lived in the village, yet the program’s opening hymn was a Church standard, “The Spirit of God.” The program began and ended with prayers.

After the program’s speeches, singing, and dancing, the villagers and visitors walked a short distance to the boreholes fitted with hand pumps. As everyone crowded around a concrete square surrounding the boreholes, Ike removed a cloth that covered one of the pumps. A girl began pumping; water flowed into a plastic pail which, when full, was lifted by a young woman onto the head of another girl, who then walked with it to the Ga chiefs and tribal council members. In turn the village and district officials dipped a glass into the bucket, held it up to inspect the clear water and took a sip. One by one, each nodded, pronouncing the water “good.” Villagers then lined up to get a drink of water.

It was a day of rejoicing. I understood what Ike had felt when he talked about watching water flow from the tap in his kitchen.