Listen to the Prophet, Stay Close to the Spirit, Seventy Tells BYU–Hawaii Students 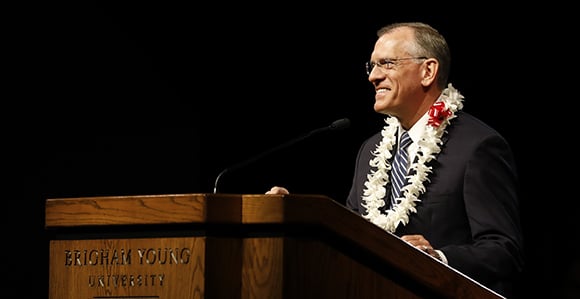 Elder Steven R. Bangerter speaks about following the prophet during a BYU–Hawaii devotional on March 19, 2019.

“I testified then and I bear you my solemn witness now that God continues His pattern of revelation and guidance through living prophets. He revealed Himself to Joseph Smith and called Joseph as the prophet through whom the restoration of His doctrine, His authority, and His direct, continuing guidance was once again established on the earth.” —Elder Steven R. Bangerter, General Authority Seventy

In the 25 years before Elder Steven R. Bangerter’s calling as a General Authority Seventy, he worked as an attorney representing churches and faith-based organizations. Over those years, he was often asked questions by faith leaders about “his” Church. Those questions helped him realize how blessed “we are to be led by apostles and prophets,” he said.

Whether these leaders asked about welfare, ecclesiastical lines of succession, or educational systems—of which BYU–Hawaii is an example—Elder Bangerter had the same answer: “Well, it’s not my church. It’s the Lord’s Church.”

“We enjoy these blessings and so many more ... because this Church is blessed by the reality of continuing revelation through a living prophet of God,” Elder Bangerter said in his BYU–Hawaii devotional address on March 19.

What the scriptures say about revelation

Throughout history, God’s pattern of speaking through His chosen representatives has remained consistent.

“However,” Elder Bangerter said, “despite that history, God’s children have remained consistently reluctant to accept God’s clear pattern of communication and hearken to His chosen prophets.”

Many insist that with scriptures containing the word of God and personal revelation, one has no need for a living prophet.

Still, Elder Bangerter said, “While the scriptures and personal revelation have always been instruments through which God has communicated with His children, they are not the exclusive means by which He has revealed His will.”

From the time of Adam, God established a clear pattern of communication. This pattern is seen through prophets such as Enoch, Abraham, Moses, Joshua, and Samuel. During Christ’s ministry, He called twelve apostles to bear witness of Him, and they continued to guide the Church through revelation after His ascension into heaven.

The words of the prophet Amos continue to be true today: “Surely the Lord God will do nothing, but he revealeth his secret unto his servants the prophets” (Amos 3:7).

“According to Amos,” Elder Bangerter said, “if God did not reveal His word among us, neither would He act among us.”

The call of the Prophet Joseph Smith was consistent with 6,000 years of history, something Elder Bangerter had an opportunity to testify of in a religious studies graduate class while he studied at Arizona State University about 30 years ago.

In a course on the Old Testament, the class received a semester-long assignment to write a lengthy research paper on a few words of scripture. Of the entire class, Elder Bangerter was, as far as he knew, the only member of the Church. And at the end of the semester, the professor called upon him to present and defend his paper, which was, as the professor put it, written from “a most interesting perspective.”

As his heart pounded in anticipation of the poignant questions that would follow, “I felt the comforting, strengthening, and inspiring influence of God’s Holy Spirit wash over me,” Elder Bangerter said. Within just a few minutes, all questions, which took the remainder of the class session, focused on “the divine origin of the call of the Prophet Joseph Smith.”

“I testified then, and I bear you my solemn witness now, that God continues His pattern of revelation and guidance through living prophets. He revealed Himself to Joseph Smith and called Joseph as the prophet through whom the restoration of His doctrine, His authority, and His direct, continuing guidance was once again established on the earth.”

Voices of today often challenge the words and teachings of the living prophets, ridicule prophetic guidance, and place demeaning titles such as “intolerant” or “uninformed” on prophets of our day.

“The claim by their own, uninspired wisdom is that ‘one day the prophet will understand, one day he will have the truth revealed to him the way it has been revealed to me,’” Elder Bangerter said. “But brothers and sisters, such rhetoric has never been consistent with God’s order.”

In discerning the Lord’s voice among all the commotion of life, one can be assured that God’s counsel will always include the guidance and direction received through living prophets.

So what is President Nelson teaching today?

“If I mention the words ‘gathering Israel’ and ‘covenant path,’ does that strike a familiar chord within you?” Elder Bangerter asked. “If so, then you are listening. Think now of the meaning and the significance of those words in your life.”

President Nelson spoke about what it really means to gather Israel during a message to 65,000 Latter-day Saints at the State Farm Stadium in Phoenix. (See related article.) 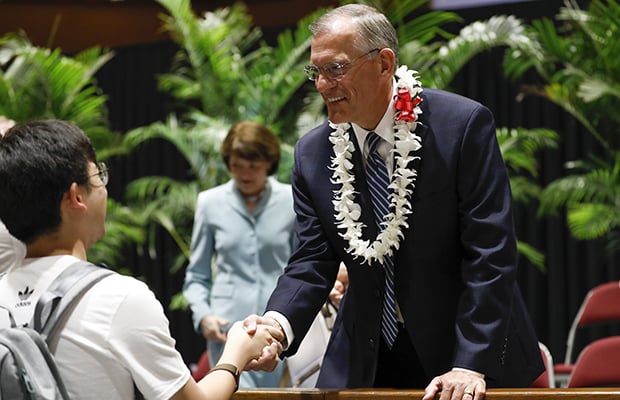 In her remarks, Sister Susann A. Bangerter, Elder Bangerter’s wife, shared how the story of Simon, Andrew, James, and John leaving their fishing nets and immediately following Jesus has been replaying in her mind.

“You may have met people who, when they were touched by the Holy Ghost, dropped their nets and asked, ‘What shall I do now?’”

Every weekend, Sister Bangerter travels with her husband to a stake conference where he presides. One of the frequent questions Elder Bangerter receives is, “What can I do to better feel the Lord’s guiding Spirit in my life?”

“His answer is simple but overlooked because it is so straightforward,” Sister Bangerter said. “‘Pray with purpose, look forward to each Sabbath day and keep it holy, go to the temple, and study the scriptures like you never have before. It will change your life.’ He adds to all of this, ‘Listen carefully to what the prophet is telling us.’”

She then quoted President Russell M. Nelson who recently said in a worldwide broadcast for youth that the “gathering [of Israel] is the most important thing taking place on earth today.”

What will those do who want to immediately drop their nets?

“Be invested in moving God’s plan of happiness forward,” Sister Bangerter said. “Be consecrated. Visualize the future scenes of your life and write down a plan. Be specific in the details, and our Heavenly Father will guide you.” 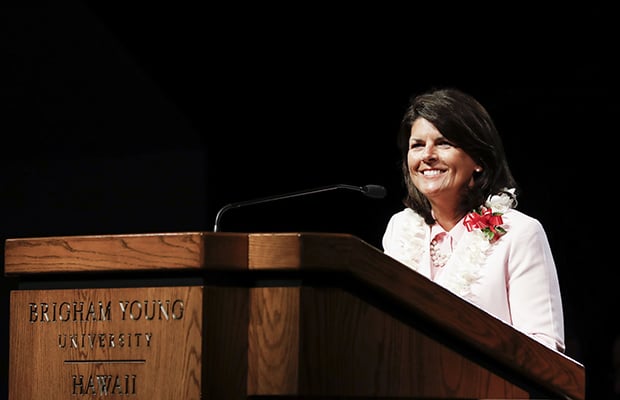 Sister Susann A. Bangerter speaks about staying close to the Spirit during a BYU–Hawaii devotional on March 19, 2019. Photo by Monique Saenz, BYU–Hawaii.