“Music makes us feel things and experience life in a different way, so we really need to make sure the music we listen to is showing Heavenly Father how we feel about Him.” —Patch Crowe, LDS musician

Whether performing on a popular television show or in a viral Youtube video, many young LDS musicians are making their mark in the music industry and winning fans around the world. Along with their powerful voices are strong testimonies of the Savior, and a desire to share their talents with others.

Youth around the world were able to get to know four of those musicians as they tuned in for a live Face to Face event on Wednesday night. Originating from BYU’s broadcast building in Provo, Utah, youth gathered in a studio—and virtually throughout the world via broadcast—to hear the testimonies and experiences of four artists—Patch Crowe, Nicole Luz, Madilyn Paige, and Lexi Walker.

“I really liked how they were the same age as us,” said Mia Bateman, a 15-year-old from Mapleton, Utah, who attended the event. “They are connected to what we all go through in life, and shared really great things to help us get through things.”

For many of the youth, a highlight to the event was hearing from artists who are around their same age. Lexi and Nicole are both 15, and Madilyn and Patch are young adults.

“They took questions from us, and they have a really great perspective,” said Christian Sorensen, a 12-year-old from Orem, Utah. “They are experiencing it as we are. It makes me want to work harder at singing.” 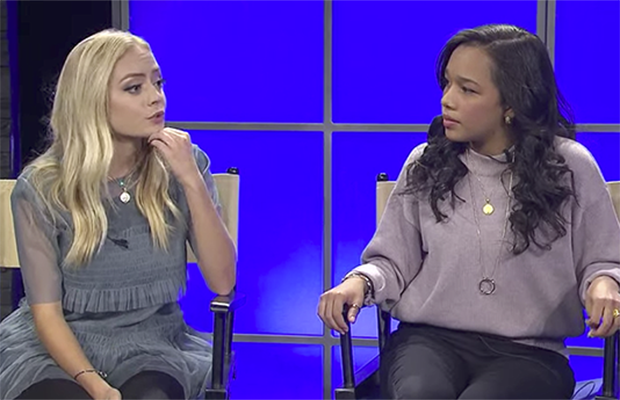 Madilyn Paige and Nicole Luz participate in a panel discussion during a Face to Face broadcast for LDS youth held on October 11.

Questions touched on a variety of topics facing youth today. Whether it was answering how they stay strong when surrounded by wickedness in the world, how to keep the Sabbath Day holy, or how they are able to be confident enough to perform, each of the artists shared their testimonies and personal experiences.

“This world, especially growing up now, it is so hard to resist the temptations and resist comparing ourselves and feeling like we are good enough,” Madilyn said. “Remember who you are, remember where you come from, and remember that you all have a purpose. It is different than everyone else. … Stay strong, you can do anything you set your mind to especially with Christ and Heavenly Father on your side.”

When asked about maintaining a good self-image in a world that continues to pressure youth to look and act a certain way, Lexi reminded youth to not get pulled into the “perfected photoshopped bits of [others] lives.”

“The only 'like' that matters, the one view that counts, is God’s,” she said.

When asked about facing trials and adversity, Nicole, who is from Brazil, encouraged youth to read the Book of Mormon and pray.

“Sometimes [life] will be hard and we will fear, but it will be harder without the Holy Ghost by our side,” she said. She reminded listeners that it “never will be easy, but we want to say I worked a lot and I learned a lot and I stayed by my Heavenly Father’s side.” 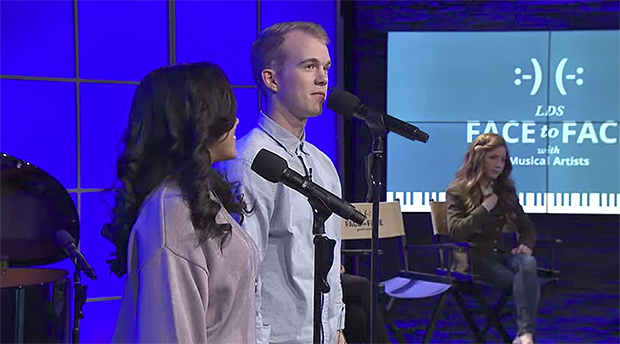 Nicole Luz and Patch Crowe perform during a Face to Face event for LDS youth held on October 11.

When asked about finding clean music, Patch, who is a returned missionary and married, answered by reminding youth of the many good options available today.

“A hymn isn’t just something that is inside the green hymn book or that we sing at church. … Music makes us feel things and experience life in a different way, so we really need to make sure the music we listen to is showing Heavenly Father how we feel about Him.”

When asked about how to overcome fear and pressures in the media, Madilyn shared her own experience of facing stage fright and how she has worked to be consistent in praying and having positive thoughts.

“I learned that the way to truly love yourself is to remember who you are,” she said. She said it is important to remember that “real worth” comes from God.

“The last thing you should be doing is comparing,” she said. “Comparison is the thief of joy, and the second we start comparing we stop progressing.”

In addition to answering questions, the artists performed several songs—individually and together. Both Lexi and Madilyn performed some of their own original songs. They concluded the event with a performance of “Come, Come Ye Saints” all together.

Lexi has performed around the world with many notable artists and has a large following online. Madilyn, 20, competed on The Voice at age 16 and has continued to perform throughout the U.S. and Canada. Nicole Luz, 15, starred in the Brazilian version of American Idol at age 9, as well as Brazil’s version of The Voice Kids at age 13. Last year she won first runner-up in the teen category in an international talent competition with 500 youth from 80 countries. Patch is a member of the band Beyond 5. He served in the Scotland/Ireland Mission.

The event, along with past Face to Face events, can be viewed online.