Hurricane Dorian Causes Minor Damage on U.S. East Coast as Missionaries Are Moved from the Bahamas 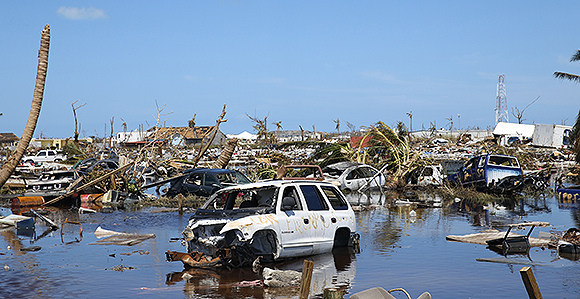 Damaged cars and fallen trees are seen after Hurricane Dorian passed through The Mudd area of Marsh Harbour on September 5, 2019, in Great Abaco Island, Bahamas. Hurricane Dorian hit the island chain as a category 5 storm battering them for two days before moving north. Photo by José Jimenez/Getty Images.

“Most of the members of the Church here on Grand Bahama Island do not have the resources to evacuate. . . . All of the members who lived in Abaco have evacuated to the U.S. and are staying with family.” —President Tony Parker, Jamaica Kingston Mission

Elder Benjamin Jewkes and Elder Brigham Richardson joined more than a thousand Bahamians on a cruise ship operated by the Bahamas Paradise Cruise Line and arrived in Palm Beach, Florida, on September 7. The cruise line offered free passage to the U.S. and returned to the islands with humanitarian aid, several news outlets have reported.

From Florida, the two missionaries flew back to mission boundaries in Kingston, Jamaica. They are now serving in new companionships in Jamaica. The elders were unable to evacuate prior to the storm because the airport on Grand Bahama Island closed.

“Although this was a very trying experience for them both, they both were very wise and mature regarding how they managed the matter from start to finish,” President Parker said in an email. He interviewed the missionaries upon their arrival to Jamaica. Pictures of the missionaries’ arrival can be viewed on the Jamaica Kingston Mission Facebook page.

President Parker has been working closely with Elder José L. Alonso, a General Authority Seventy and President of the Church’s Caribbean Area, to gather information about the missionaries and members in the affected areas in the Bahamas.

President Parker said both companionships will remain in Jamaica until he feels comfortable with allowing them to return to Nassau.

President and Sister Parker arrived on Grand Bahama Island on September 10 and are working with the branch president to minister to the members and help with critical needs. Hurricane Dorian pummeled the Bahamas on September 1-2 with category 5 intensity. It was the strongest known tropical system to impact the Bahamas, according to the National Weather Service.

“Most of the members of the Church here on Grand Bahama Island do not have the resources to evacuate. Therefore, they are staying put,” President Parker said in an email. “All of the members who lived in Abaco have evacuated to the U.S. and are staying with family.”

Richard Long, area welfare and self-reliance manager for the North America Northeast and Southeast Areas, said that compared to the damage that occurred in the Bahamas, the east coast of the U.S., “for the most part, fared very well.”

“I’m so impressed and pleased with the planning efforts that happened, how we were able to—with advance notice—do some extensive planning,” he said. “We were prepared for the worst. We were ready to stand up. We had trucks and forklifts all lined up.”

Five meetinghouses in North Carolina were affected by minor flooding, leaks, or wind damage, but all will be easily repaired in the next week or so, Long said.

There have been reports of minor wind damage all the way up the coast to Canada, he said. Some damage in the southeast occurred because of the tornadoes that spun off. The area hardest hit on the east coast was Outer Banks, North Carolina, on September 6, but no members or missionaries were on the islands.

“All priesthood leaders are reporting that they have capabilities in their own stakes to provide the resources and assistance they need,” he said.

Local leaders are actively assessing needs in their areas. They are identifying food banks that have been depleted and helping other community partners. The biggest area of need right now, Long explained, is for the displaced Bahamians who have arrived in Florida and other areas.

“Leadership is on top of it all. They are very engaged, and people want to help,” he said.