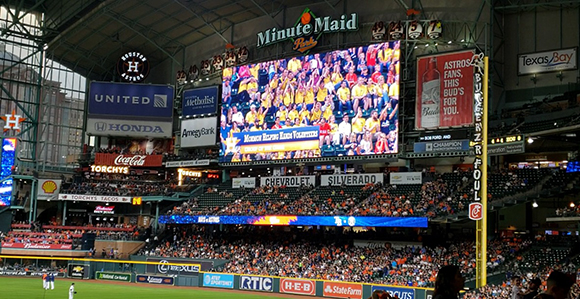 Mormon Helping Hands volunteers were recognized on the 124-foot-wide big screen at the Astros game at Minute Maid Park on June 18.

“As both members’ and neighbors’ homes were helped, I saw over and over again a look of despair on people’s faces change to hope and thankfulness.” —Greg Bond, Bay City Texas Stake President

At the end of the third inning of the baseball game between the Houston Astros and the Tampa Bay Rays at Minute Maid Park in Houston on June 18, the PA system blared: “We’d like to welcome our Group of the Game from The Church of Jesus Christ of Latter-day Saints. During Hurricane Harvey, there were as many as 16,000 Mormon Helping Hands volunteers working around Greater Houston each day and provided over one million man-hours of service. Thank you for your service!”

Nearly 5,000 Church members, most wearing the Helping Hands yellow shirts or vests, went wild as the cameras panned across the cheering crowd, flashing it on the 124-foot-wide big screen.

“This night is not about us,” said Elder Sean Douglas, Area Seventy for the Houston region. “This should be a recognition of everyone who participated in helping after Hurricane Harvey. This is a community that came together and put neighbors first. There were no boundaries. We get recognized for the yellow shirts, and that’s an honor, but our yellow shirts really reflect all the denominations and sects in the community that stood up and came out. What we are doing tonight is saying ‘thank you’ to the Astros, saying ‘thank you’ to Houston, and ‘thank you’ to God for allowing us to be part of this.”

Tomball Texas Stake President Samuel Bikman said he hopes the Houston community will associate the Church with service and helping. “I want the message to go out of just serving, going out and helping people’s lives improve in any way possible.”

He worked with Marcel Braithwaite, Matt Brand, David Piccirilli, and Ryan Smith from the Astros’ front office in organizing the event.

“The entire front office wanted to have this night,” said Piccirilli. “What y’all did after Harvey was a group effort. It’s really cool to see everyone here.”

Service is important to the Astros organization, said Smith, who is a member of the Church. He noted that many players have their own charitable foundations. “A lot of the guys got involved when they got back to town after Harvey hit. They were over at the George R Brown Convention Center helping out, providing service and comfort.”

Matt Brand, Houston Astros senior vice president over corporate partnerships, praised Latter-day Saints for their service. “What the Church did to come in and help the community was incredible … because if they hadn’t, I can tell you thousands of people would have been put back for months and months, not only financially, but with a place to live. We had four and a half feet of water in our house, and I know what that feels like. I can’t tell you the impact that 16,000 people coming in every weekend had for this city.”

Twila Carter, executive director of the Astros Foundation, said, “I am a huge fan of what the LDS Church does.” The Church was also able to help her get two truckloads of supplies to needy people after Harvey.

Bay City Texas Stake President Greg Bond threw the first pitch of the game. “The experience was not about throwing out the ball but having a chance to talk to many people about [Helping Hands]. I considered it an honor to represent all those that had helped in the community,” he said. “As both members’ and neighbors’ homes were helped, I saw over and over again a look of despair on people’s faces change to hope and thankfulness.”

And as the Astros—2017 World Series Champions on a 12-game winning streak—won 5-4 in the bottom of the 9th inning, Minute Maid Park erupted in a flood of cheering all its own. 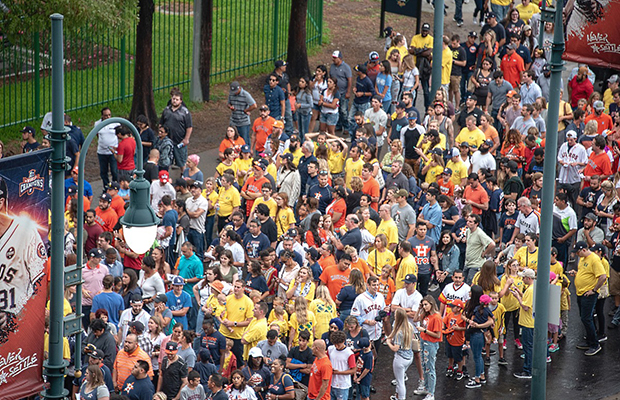 Of the 34,000 fans who attended the Monday evening game, 5,000 were Mormon Helping Hands volunteers. Photo by Robert Boyd. 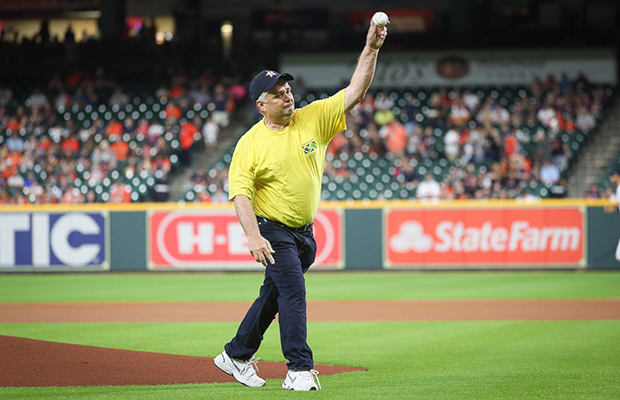 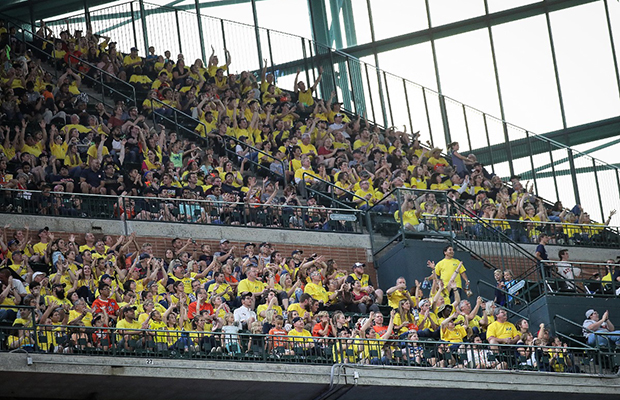 Some of the 5,000 Mormon Helping Hands volunteers in attendance. Photo by Robert Boyd. 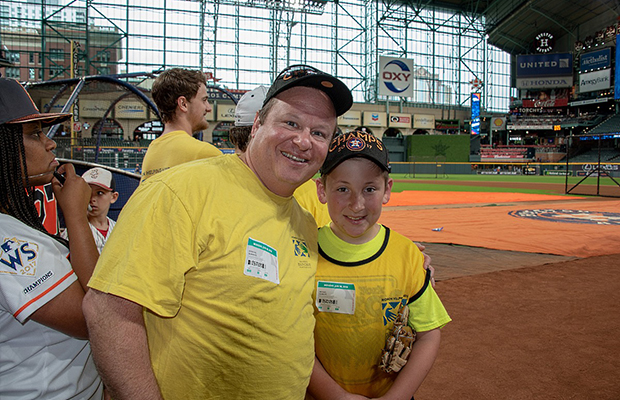