In this new video from the Church, see how LDS Charities is using aid donations to bless the lives of those affected by recent disasters worldwide.      Download video: Small Medium Large

In response to the generous help given following a series of recent unprecedented catastrophes, President Henry B. Eyring, First Counselor in the First Presidency, expressed his gratitude. “In the midst of this suffering, people throughout the world have rallied to come to the aid of their brothers and sisters,” he said in representing the First Presidency.

Following a rash of hurricanes, earthquakes, wildfires, famines, and mudslides, members and friends of the Church have responded by giving generously of their time and resources to provide relief in their communities and across the globe. Hundreds of thousands have lost their homes, their belongings, and in some cases even their loved ones through the tragic effects of natural disasters and conflict.

Hurricane Harvey, which struck the Texas coast on August 25, was the first in a series of disasters in North America that spanned several weeks. With 130-mile-per-hour winds and up to 52 inches of rain in Houston, Harvey caused more than 80 fatalities and damaged nearly 200,000 homes in the greater Houston area. 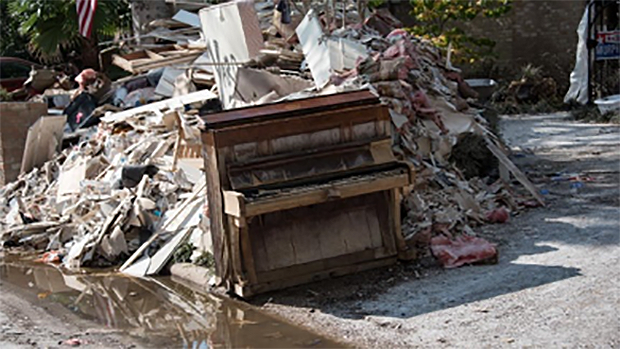 Following closely behind were Hurricanes Irma and Maria, two of the strongest storms on record to strike the region. Their combined force, with 185-mile-per-hour winds, left a path of destruction throughout multiple Caribbean islands and Florida. Over 180 lives were lost; islands such as Barbuda, Saint Martin, Saint Thomas, and Dominica suffered catastrophic devastation; and Puerto Rico’s power grid, transportation routes, and agricultural territories remain heavily damaged.

Almost simultaneous with the Caribbean hurricanes, two massive earthquakes struck southern and central Mexico, toppling dozens of buildings and homes and leaving an estimated 450 dead and 6,300 injured, while in August tragic mudslides in Sierra Leone killed over 1,000 residents and left 3,000 homeless. 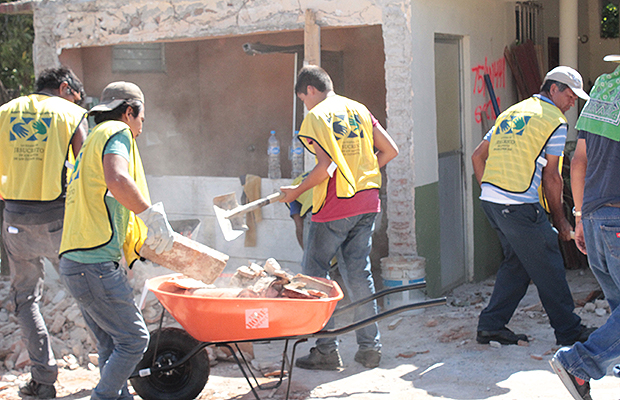 In October, the deadliest wildfires in California state history burned nearly 400 square miles and killed at least 40 and destroyed more than 8,400 structures. In addition, there have been ongoing famines throughout Africa and the Middle East, which have displaced millions and caused significant loss of life. 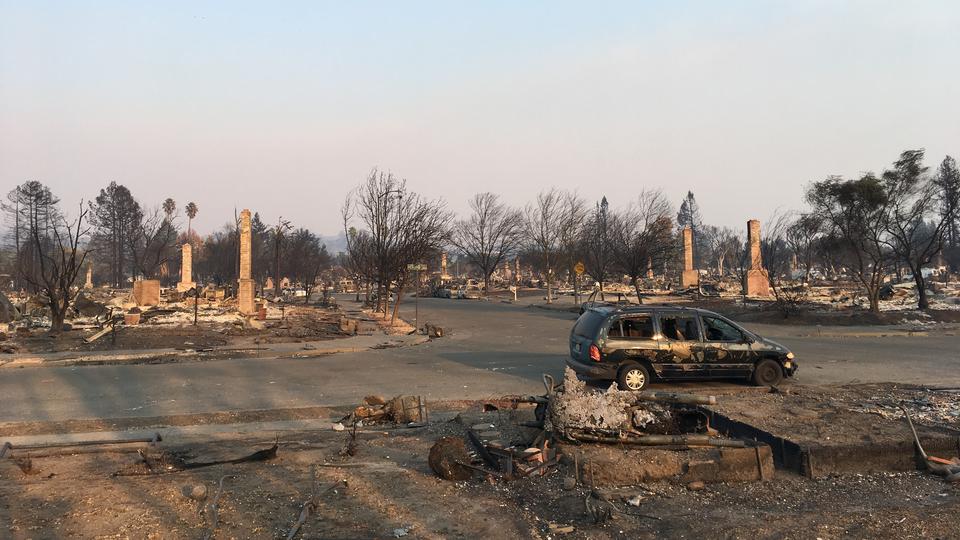 Several Santa Rosa, California, neighborhoods were burned to the ground.

Amid all this suffering, members of the Church have rallied to ease the burdens of those who have suffered such devastating losses. Presiding Bishop Gérald Caussé noted that “in September, members donated over 1 million hours of service in the U.S. alone.” He continued, “Donations to the Humanitarian Aid Fund in September were more than four times the monthly average.” Such donations enable the Church and its partners to respond quickly and efficiently to disasters throughout the world. 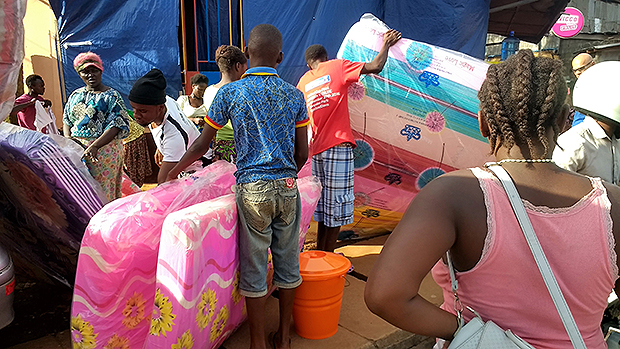 The Church delivered mattresses, food, water, and other life-sustaining supplies to families in Sierra Leone.

Church leaders have been quick to express their deep gratitude for the overwhelming generosity of the members and friends of the Church in the face of these catastrophes. “We are truly humbled to see the tremendous sacrifice our members are making to help their brothers and sisters,” said Sister Jean B. Bingham, Relief Society General President. “We hear countless stories of simple Christlike service as they mourn with those that mourn and comfort those that stand in need of comfort.”

One such story is that of a newly organized congregation, the Springtown Ward from Azle, Texas. On an early Friday morning in September, Bishop Paul Oldroyd loaded up his car with supplies and joined several willing ward members on a four-hour journey to Houston. Providing their own transportation, supplies, and accommodations, they responded to the request from local leaders to participate in Hurricane Harvey relief efforts for their fellow Texans.

“You hear about it and imagine what it must be like, but then you go and see how these people’s lives are changed—it’s emotional. I will never forget it,” said Oldroyd. One of their assignments was to help repair an elderly widow’s home that had sustained significant flood damage. Bishop Oldroyd noted that the need was overwhelming but that it was an incredible experience to see everyone come together to finish what the homeowner thought was impossible. 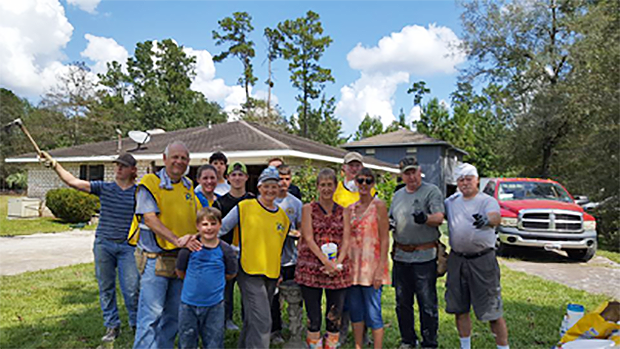 Members of the Springtown Ward celebrate a successful day of cleanup and repair.

In addition to the volunteer service provided by members, the Church works alongside many partners to provide life-sustaining aid. Church-produced commodities have also been widely distributed. Approximately 90 truckloads of food, water, clothing, and other relief supplies have been shipped to Texas and Florida, while more than 40 ocean containers of food, water, building materials, hygiene kits, and cleaning supplies have been sent to various islands in the Caribbean. In addition, two planes—each loaded with 80,000 pounds of food, water, and tarps—were delivered to Puerto Rico. In Mexico, nearly 15,000 food boxes and hundreds of hygiene kits and tents have been provided to support government relief efforts. 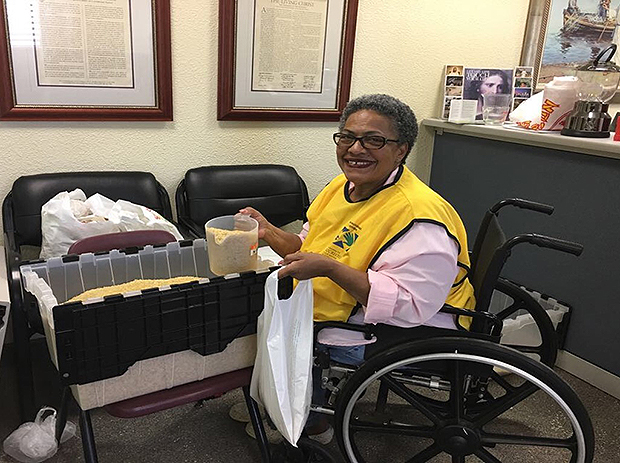 A woman helps fill a food order to the victims of Hurricane Maria, which completely devastated Puerto Rico on September 6, 2017.

Church leaders visited members and neighbors in the impacted areas to offer words of support and encouragement. In the wake of the hurricanes, members of the First Presidency and the Presiding Bishopric traveled to Texas, Florida, and the Caribbean, while members of the Mexico Area Presidency visited the earthquake-damaged regions of that country. Members of the Quorum of the Twelve Apostles and the Seventy met with those affected by the fires in California. Sisters from the Relief Society, Young Women, and Primary General Presidencies accompanied some of the brethren to the areas affected by natural disasters. Wherever these leaders went, they comforted members and encouraged them to reach out in service to their neighbors. 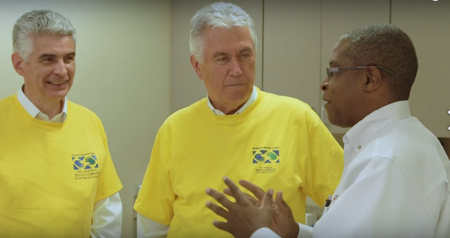 “The Church is really not so much about an organization. The Church is much more about you, about every individual member. That makes all the difference,” said President Dieter F. Uchtdorf, Second Counselor in the First Presidency. “Your work, your service, your love, your kindness to God and your fellowmen is a reflection of what the Church is all about.”

Of his visit to Texas, Presiding Bishop Caussé observed, “It’s inspiring to see members roll up their sleeves and get to work. They came prepared, willing to serve, with smiles on their faces. We thank the members of the Church, from the bottom of our hearts, for their sacrifices and generous contributions. As we go about helping in whatever way we can, we truly become the Lord’s hands on earth.”

While in the Caribbean, President Eyring said, “I was with some people [today] who lost a great deal. I looked in their eyes and I could see that these apparently ordinary people were on the rock of the Lord Jesus Christ. They saw the light even in the darkness. And so things for them will work out. Whatever it takes, they will rebuild.” 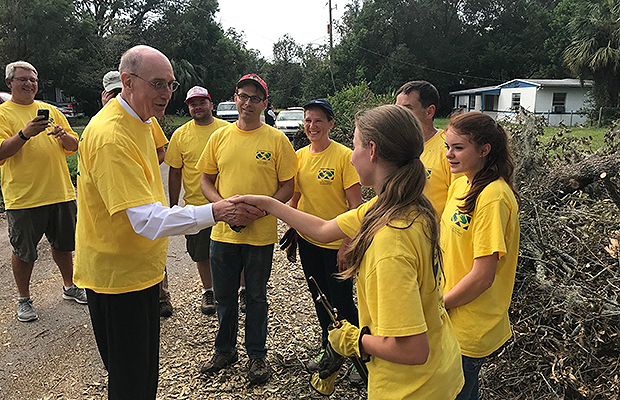 President Henry B. Eyring stops for a visit with Mormon Helping Hands volunteers concerning the destruction caused by Hurricane Irma.

Those who wish to assist with the Church’s relief efforts are invited to find ways to serve in their communities or donate to the Humanitarian Aid Fund. Opportunities for local service can be found on justserve.org. You can learn more about the Church’s efforts by visiting ldscharities.org and mormonnewsroom.org.