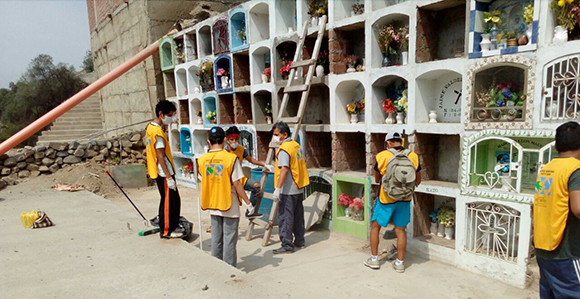 The “graveyard shift” has taken on deep, tender meanings for yellow-vested Mormon volunteers in flood-weary Peru.

After earning nationwide renown for their “Helping Hands” efforts in assisting tens of thousands of flood victims, Latter-day Saints recently answered a less traditional call to action in Chosica: cleaning and organizing the city’s above-ground cemetery.

For more than a year, record rainfall has inundated much of this South American nation, flooding towns and overflowing rivers. Dozens died and thousands more were left homeless. Nearly half of the country’s 25 regions have been impacted by the disaster.

Residents of the Chosica region in western Peru are among the most dramatically affected by the flooding. Overflow from the powerful Rimac River recently deluged much of Chosica’s Santa Eulalia Cemetery, strewing trash and filth across a community landmark regarded as sacred ground by many residents.

(Above-ground cemeteries are common in many urban areas of Latin America. Instead of an underground burial, the remains of a person who has died are placed inside above-ground vaults often built in vertical layers.)

Knowing of the Church’s history of serving during tough times, Chosica city leaders reached out to local Mormons, asking for help at the beloved Santa Eulalia Cemetery.

“The members were called by the stake presidency … and enthusiastically arrived at the cemetery to begin cleaning and organizing the cemetery under the direction of the municipal authorities,” said local Church spokesman Walter Bobadilla.

Donning yellow “Helping Hands” vests and protective face masks and gloves, the Mormon volunteers spent the day sweeping away debris, gathering up trash, and sprucing up the cemetery vaults.

“They cleaned up the cemetery facilities, renovated the [vault] alcoves, and collected garbage that was removed for disposal,” said Bobadilla.

“We are here because we can’t say no when we are asked to serve,” one young man told local LDS public affairs officials.

The Chosica cemetery project adds another chapter to the Church’s ongoing history of flood relief in Peru. Mormon humanitarian response directors have worked closely with civic leaders—including Peruvian First Lady Nancy Lange Kuczynski—to deliver provisions, workers, and muscle wherever they are needed. Hundreds of tons of Church-donated relief supplies have benefited more than 100,000 flood victims. Meanwhile, thousands of Latter-day Saints throughout the country have prepared more than 55,000 emergency relief kits.

Last year, Mrs. Kuczynski and her husband, President Pablo Kuczynski, spoke with President Henry B. Eyring of the First Presidency, expressing thanks for the Church’s ongoing assistance in the aftermath of the flooding.

“Words alone are not enough to thank the Church for all it has done during this emergency,” the First Lady told President Eyring. 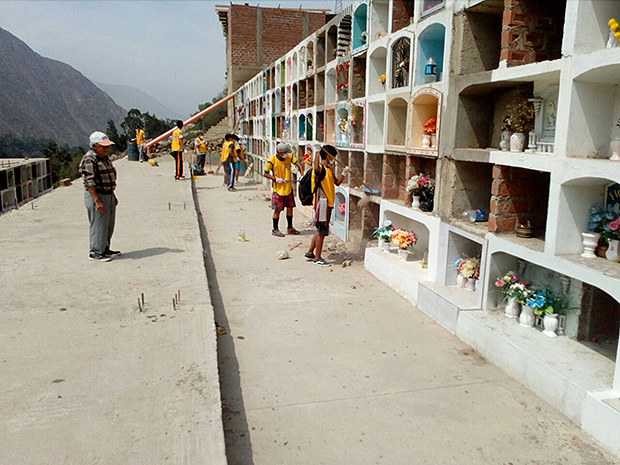 A row of Mormon “Helping Hands” volunteers cleans up vaults of an above-ground cemetery in Chosica, Peru. The cemetery was damaged in early 2018 during heavy rains and flooding. 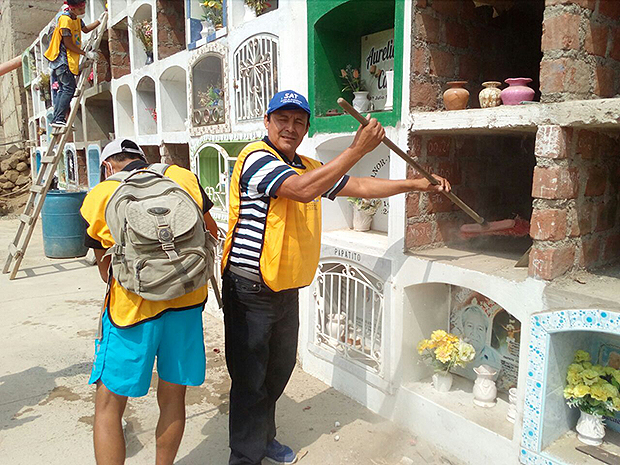 Members were called by the stake presidency and enthusiastically arrived at the cemetery to begin cleaning and organizing the cemetery under the direction of the municipal authorities.